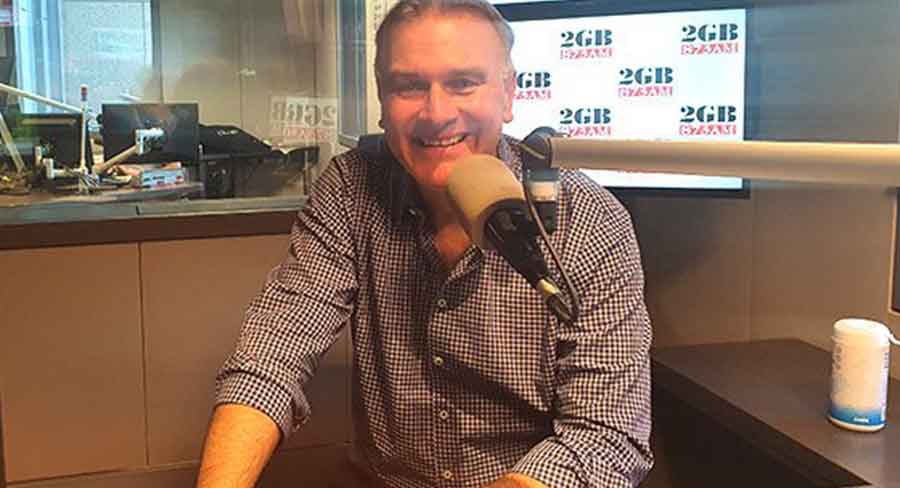 2GB’s new drive presenter Jim Wilson arrived at 2GB yesterday with his first 3-6pm show. The former Seven sports presenter delivered a fast-paced and packed program, keeping his promise to listeners that he wouldn’t be “reinventing the wheel” as the replacement for Ben Fordham.

Former prime minister Julia Gillard was even a guest on the show, someone listeners may not have expected to hear on the station once upon a time.

While Fordham’s drive theme music was supplied by Coldplay, Wilson has opted for something a little closer to home, INXS’s New Sensation.

He could have hardly hoped for a bigger news day to start his new career as a radio host. The NSW/Victorian border had just been closed and Wilson was all over the story with state and federal leaders and Nine reporters in Melbourne (Seb Costello) and at Albury/Wodonga (Reid Butler).

“Usually when we start this show we will go straight to the news of the day – that’s what we are all about, keeping you informed,” said Wilson who started the show with a lengthy chat to listeners.

“But I just want to say a few words on day one in the chair. This is the closest thing I can remember to welcoming audiences to the 2000 Sydney Olympics. I have got such a buzz and it is such a privilege to be in this chair to be taking the reins of a show that is all about informing you, chatting with you and in these difficult and challenging times helping you. We will have a laugh along the way and I do love a chat.

“I am a long-time listener and contributor to this station and network, but I am a first-time host. I won’t be reinventing the wheel – the man who was in the chair for the best part of a decade did an absolutely fantastic job. Ben Fordham you have raised the bar high on this program and now you Zac and the team are doing a superb job on breakfast.

“I am lucky to the be joining the 2GB family and I have to scratch myself to say I am working with the legendary Ray Hadley who I have enormous respect for. And Deborah Knight, on holidays this week, who will be handing the baton to me every day. Deb is a great journalist and broadcaster.

“To the man who has occupied this chair for more than a month, Mark Levy. You are a good mate and we go back a long way. He has done a great job on drive and was in spectacular form on the weekend on The Continuous Call Team. He’s just 35 years of age and has passion and energy to burn and he will be a regular on this program. This bloke does everything, he works seven days a week.

“Nine’s managing director of radio is a good mate of mine and had been for a number of years – Tommy Malone and the national content director Greg Byrnes, who is right beside me in the studio today. Thanks for backing me guys and having faith in me.

“Our brilliant team is led by Paul Christenson who produced the legendary Alan Jones for three decades. And Alan good luck to you tonight with your new show on Sky. I am lucky to have you Paul, and to producers Tara and Matt, we are going to have a lot of fun. And to my wingman, panel operator extraordinaire Jordan I promise I won’t touch the buttons.

“[I had] 33 years as a journalist starting at Nine, and then 28 years with Seven, and I hope chairman Kerry Stokes is listening. I am pretty sure he is along with his executive assistant Kate Lewis. They are great friends of mine and supporters through thick and thin.

“Welcome everyone to drive.”