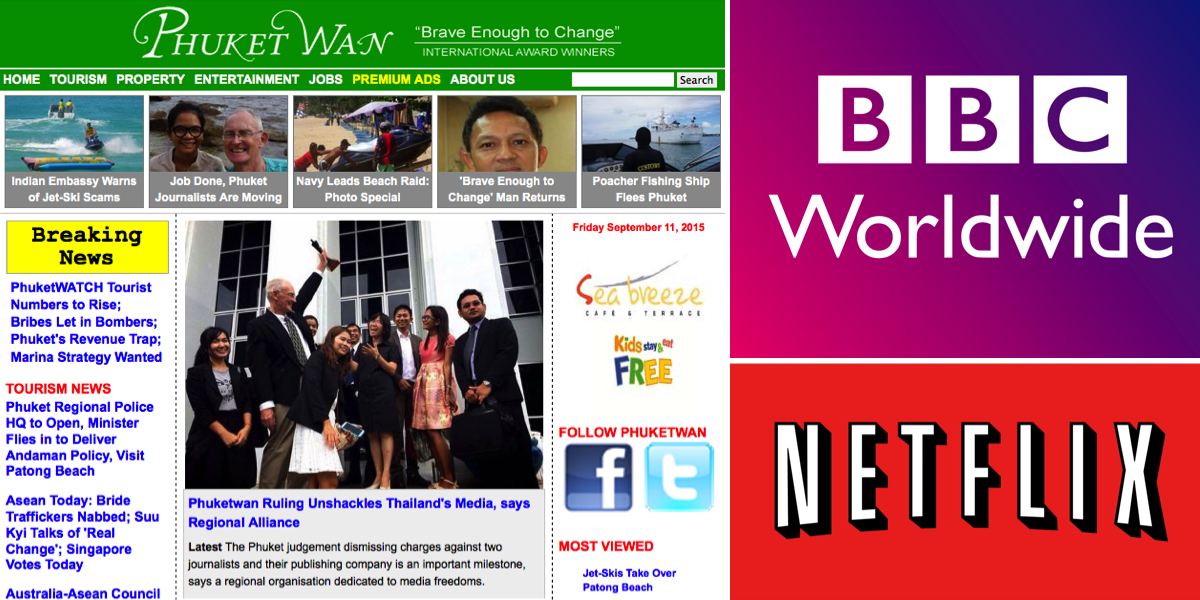 Mediaweek welcome back former contributor Peter Olszewski who previously covered media news in Asia for Mediaweek. His column will be published in the Mediaweek Morning Report and the website each Friday.

Olszewski has worked at the Phnom Penh Post since February 2008, mostly as Siem Reap Bureau Chief. He has worked in Australian media for over 40 years for a variety of publications.

He has written for The Age, The Sydney Morning Herald, Nation Review, The Australian and The Bulletin. He was editor of Australian Playboy, People magazine, the Australasian Weed, Loose Licks, and Go Set national pop paper.

Morison, a former senior editor of The Age in Melbourne, invested his lifesavings into his venture but for the last 20 months he’s been involved in a messy court case, a nightmare that began to unfold in December 2013.
To make matters even more galling for Morison, he and his sidekick journalist Chutima Sidasathian were sued by the Royal Thai Navy for re-publishing one paragraph from a Reuters series on the Rohingya immigration issue, one of Morison’s pet causes.

The intense media coverage hasn’t helped Morison’s bottom line which has taken a big hit with legal costs.
In fact Morison admits he was thinking of possibly selling even before the court case began as competition for the publishing dollar is fierce on the island, with the print and online versions of the aggressively-marketed Phuket News dominating.

“We were talking about what to do next when the policeman knocked on our door in December 2013,” Morison told Mediaweek. “So I guess we are now resuming our discussions about what to do.

“Defending the Reuters paragraph, which we merely reproduced word for word, has cost me [US]$60,000 to $100,000 so I’ll have to assess my depleted savings.

“Probably we will put Phuketwan on the market. It’s a good buy for someone who wants the adventure of a lifetime. We’ll know more once we’ve talked through all the options, but we’d hate to walk away without the Rohingya having been given a proper chance at a real life in their homeland, Burma.”

The September issue has a bad guy theme and the film noir-style parody cover features actor Kim Byung-ok standing next to a half-open car boot. A woman’s legs stick out of the boot and her ankles are taped together.

The cover line translates as, “Women like bad guys? This is a real bad guy. Are you dying to love it?”

A photo shoot inside continues the theme quite graphically.

Netflix will expand into South Korea, Singapore, Hong Kong and Taiwan in early 2016 as it moves to complete its global rollout by the end of next year.

Once launched, internet users will be able to subscribe to Netflix and instantly watch a curated selection of popular TV shows and movies in high definition or even Ultra HD 4K on nearly any internet-connected screen. Netflix first became available in Asia earlier this month with the start of service in Japan.

“The combination of increasing internet speeds and ubiquity of connected devices provides consumers with the anytime, anywhere ability to enjoy their favorite TV shows and movies on the Netflix service,” said Reed Hastings, chief executive officer of Netflix. “These four markets well represent those trends.”

BBC TO BROADCAST FOR NORTH KOREA

The BBC plans to produce a daily news program for North Korea, broadcast on shortwave radio.

The Korea Times said the moves are an attempt to compete with state-sponsored media organisations such as Al-Jazeera and China Central Television (CCTV), which have better resources and provide broadcasting services in the UK.

The service will be part of an expanded BBC World Service. Other moves include sharing content with reporters based in countries where the BBC provides a service, a children’s-only streaming service, a satellite TV service for Russian speakers, expanding BBC Arabic Service’ s regional material and more coverage of North Africa and the Middle East.

A Hong Kong photographer who was detained in Thailand for carrying a bullet-proof jacket and helmet in his airport departure luggage was freed on bail on Sunday.

But he must attend court again for a further bail hearing on September 17, and still face five years jail on weapons charges.

The photographer, Anthony Kwan Hok-chun, from the Hong Kong based Initium Media Group initially flew to Bangkok to cover the aftermath of the shrine bomb, and he had packed what he regarded as “personal protection equipment” in readiness for the assignment.

He was arrested on August 23 at the departure lounge of Suvarnabhumi airport after the flak jacket and helmet were detected in his hand luggage.

The catalogues, distributed in the seat pockets of Singapore Airlines and SilkAir planes, are published quarterly for the DFASS Group, the world’s largest inflight duty-free specialty retailer.

The newly designed glossy catalogues provide customers with comprehensive and convenient onboard shopping.

A soon-to-launch Hong Kong online investigative news agency, which will publish in English and Chinese, raised more than A$812,000 via crowdfunding.

The news service, Factwire, launched a fundraising campaign in July on FringeBacker. It initially aimed to raise HKD3 million (A$560,000) and reached its target nine days before it August 18 deadline.

In its first year, FactWire content will be freely available to news outlets based in Hong Kong, but also to the Asian editions of international news organisations like the BBC, CNN or the Wall Street Journal.

FactWire is now recruiting reporters and notes, “Never mind if you don’t have a journalism degree, although that may give you an edge over other contenders.

• The Thomson Reuters Foundation is funding an independent news site in Myanmar. The site, Myanmar Now, launched in August and says it will deliver features, analysis, and investigative articles.