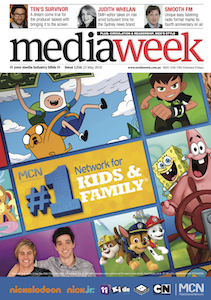 Inside the 23 May issue of Mediaweek magazine #1256

Person Of The Week
Judith Whelan: the editor of The Sydney Morning Herald talks about handling the job during a turbulent time for the Sydney news brand and for print media in general

Television
Stephen Tate, executive producer of the new Australia Survivor now shooting in Samoa, reveals that working on the series for Network Ten is a professional dream come true

Television
Secret City, the miniseries launching next month for Foxtel, is the first production to be located in Canberra since ABC’s The Code, and Mediaweek speaks to Monica Penders, director of Screen ACT, about driving more work to Australia’s capital

Inside Publishing
The latest newspaper circulation and readership figures from emma and Audited Media Association of Australia plus new cross-platform data for newspapers and magazines, including emma’s new total audience reports

Inside Publishing
The rebirth of Men’s Style: editor Michael Pickering talks about digital touchpoints, the magazine’s plans for more video and the competition from GQ Australia

Podcasts
Recent Mediaweek podcasts plus our own weekly roundtable series with editor James Manning, deputy editor Dan Barrett and digital editor Kruti Joshi along with some tips for further listening