IAB Australia and Nielsen have released Nielsen’s Mobile Ratings Report, the a step towards to cross-device and daily audience measurement.

The release of mobile audience data via the Mobile Ratings Report is the first phase of major upgrades to the digital audience measurement system in Australia. In early 2016 the Mobile Ratings Report will be replaced by Digital Ratings Monthly which will fuse smartphone and tablet panel data with Nielsen’s home/work PC panel data and tagged website data. Digital Ratings Monthly will be the base for further development which will see Nielsen transition to daily delivery of digital audience data through Digital Content Ratings, which is slated for launch in mid-2016.

“With over 15 million Australians now owning a smartphone and some 12 million owning a tablet device, these two devices count for 59 percent of all time spent online. It’s critical that the industry has access to data which quantifies the importance of mobile media audiences and helps to inform marketing investments in the digital realm.

“This report tackles a particularly complex area of measurement and we are confident publishers and agencies alike will gain considerable insights from it. We look forward to continuing to work closely with the industry to ensure Australia remains at the forefront of digital audience measurement globally,” said Walsh.

Ed Harrison, IAB board chairman and Yahoo7 CEO, commented: “Australia is once again at the forefront of measurement globally, becoming just the fourth market in the world where Nielsen has established a mobile panel. We are confident we will continue to achieve industry milestones with the next iteration of our online measurement currency due next year thanks to the strong support of publishers, who are working closely with Nielsen.”

Head of Nielsen’s media industry group Monique Perry said that through support from IAB Australia and the digital industry, Nielsen has been able to focus and invest heavily in technology, platforms and meters that can measure these important mobile audiences.

Key findings of the July 2015, Mobile Ratings Report include:

• Australians 18+ spend more time on smartphones than any other digital device, with just over 33 hours per person per month spent browsing or using apps

• Current Events and Global News category is dominated by the same brands that have historically been strong on desktop (news.com.au, smh.com.au)

• Over 10.7 million Australians used video and streaming services on their smartphone and 5.2 million on their tablets

• More than 10 million Australians are using smartphones for entertainment, news, social and search each month

• More than eight million are using smartphones for shopping, music, travel and gaming

• Google and Facebook are the leaders in both smartphone and tablet rankings with a number of other global brands being very high in rankings.  Local companies also feature strongly with Yahoo!7, Telstra, Fairfax, Coles, Commonwealth Bank and News all ranking highly.

According to the IAB PWC Online Advertising Expenditure Report issued in May 2015, close to one-third of all display digital advertising dollars in Australia was spent on mobile advertising in the March quarter of 2015.

The Mobile Rating Report provides a first look at results based on the mobile panel which consists of 2,000 iOS and Android smartphone users and 500 iOS and Android tablet users aged 18+. This panel is nationally representative of Australian smartphone and tablet internet users, has individual privacy agreements in place with all panellists and passively measures the online behaviour of panellists on their mobile device through an on-device meter (Android) or proxy solution (iOS). The panels provide granular data on a monthly basis that can be used by media buyers and sellers to better understand the mobile consumer and assess the opportunities available in what is now a significant media channel.

The full Mobile Ratings Report will be uploaded to the Nielsen website on the 7th October. 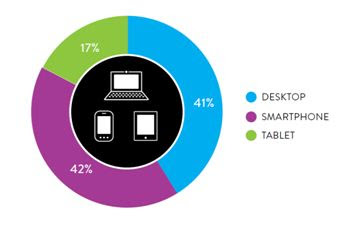 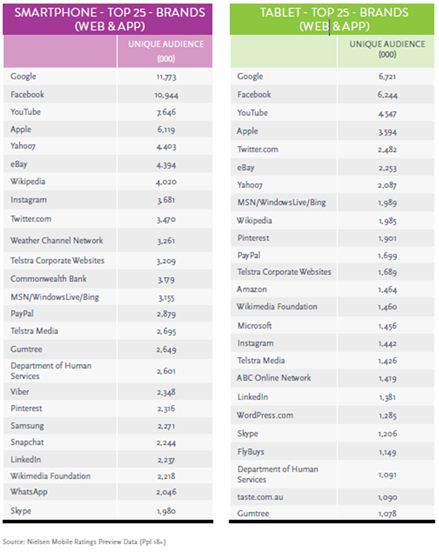