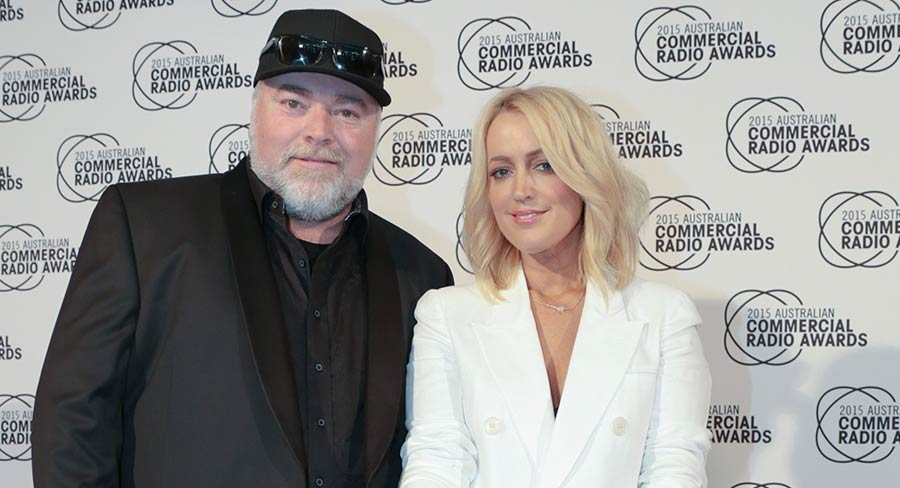 Here are edited highlights from the HT&E half year results presentation:

• EBIT of $29.2 million up 6% on prior year
• Underlying earnings per share increased 45% to 6.3 cents per share
• Group costs from continuing operations down 13% to $95.8 million
• iHeartRadio licence extended to 2036
• Closure of Gfinity Esports Australia 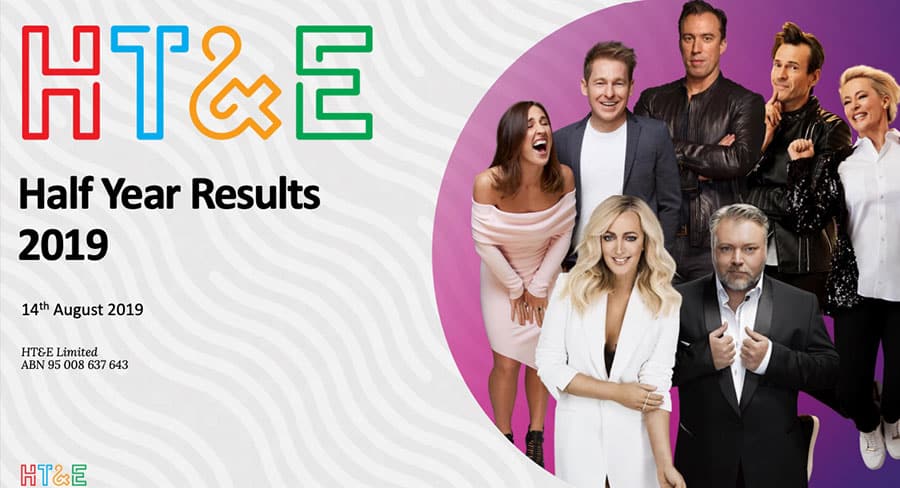 HT&E has released its results for the 6 months ending 30 June 2019. Statutory profit from continuing operations and before exceptional items was up 34%, and EBITDA on the same basis was up 26% to $38.1 million.

Revenue from continuing operations decreased 4% to $130.9 million driven by a softer radio market in Australia and the non-renewal at the end of 2018 of a material revenue contract in Hong Kong.

Group costs from continuing operations before interest, tax, depreciation and amortisation, and exceptional items were down 13% to $95.8 million including the AASB 16 adoption.

Corporate costs declined 11% in the first half as a result of group simplification. Further savings are expected in the second half and into 2020, in line with HT&E’s aim of reducing corporate costs and simplifying the management and operational structures between HT&E and ARN.

Net profit after tax on a continuing operations basis and before exceptional items increased from $13.5 million to $18.1 million in the first half, an increase of 34%. With the benefit of the ongoing share buyback, earnings per share on the same basis lifted from 4.4 cents to 6.3 cents per share, an increase of 45%.

Exceptional costs (net of tax) of $4.8 million were incurred in the first half. These related to corporate and ARN team restructuring charges incurred largely as a consequence of the sale of Adshel in 2018, and the decision taken to close Gfinity Esports Australia. As a result, statutory profit attributable to shareholders from continuing operations for the first half to 30 June 2019 was $13.3 million, compared to a profit of $14.9 million in 2018.

HT&E Chairman, Hamish McLennan, said, “HT&E delivered a good profit result for the half particularly given conditions in the Australian metro radio market were challenging during the first quarter, where sector revenue was down 3.1% on the prior year. Overall the radio market was down 2.4% in the first half.

“We are first and foremost a radio and audio business since selling Adshel and over the last six months have spent a huge amount of time focusing on the objective of creating Australia’s most complete and compelling audio offering.

“We have made good progress reducing corporate costs and simplifying the management and operational structures between HT&E and ARN. We are assessing our existing investments to determine how they can better integrate into audio, and if not, what alternatives are available to deliver better shareholder value. As a result we have decided to close Gfinity Esports Australia in which HT&E holds a 35% effective interest. While the business has achieved some significant and world-leading results, the economics of esports in the Australian market are yet to deliver sustainable, positive earnings.

“We will also consider investment opportunities that are aligned with our overall audio strategy.”

HT&E CEO & Managing Director, Ciaran Davis, said, “Our absolute focus is on our core radio business that remains highly cash generative with exceptional margins. Across the network we are reaching record numbers every week and we have maintained our winning edge, retaining the number one and two FM breakfast shows in Sydney, and KIIS 101.1 in Melbourne recording its highest station audience since 2014. We are continuing to focus on growing ratings and gaining market share by recruiting and retaining the best radio talent in Australia.

“Broadcast radio remains our core business, and the big opportunity to transform from a radio offering to an audio business. We already deliver the most complete audio solution in Australia and our digital platforms that extend audience reach are an important part of this. With our iHeartRadio platform we lead the market and are investing in technology and data capability for targeted advertising to generate growth.” 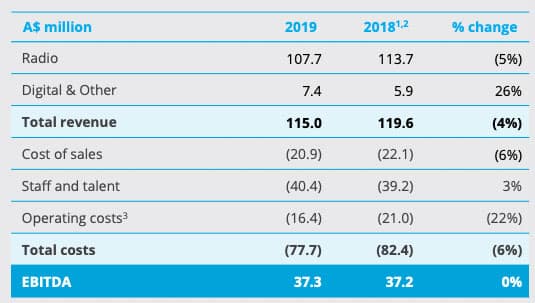 • Radio market down 2.4%
• ARN revenue fell 3.8% to $115 million
• Reported EBITDA was in line with last year
• Dominance in Sydney with ARN retaining No.1 and No. 2 FM breakfast shows
• ARN network of KIIS and Pure Gold reaching record numbers each week, with over 5 million listeners, up from 2018
• iHeartRadio app downloads now exceed 1.9 million

In a radio market down 2.4%, ARN revenue fell 3.8% year on year to $115 million. First quarter revenue performance was weak, falling 5% behind the equivalent period in 2018. Conditions improved somewhat early in the second quarter, before softening following the Federal election. Despite this, second quarter revenue was in line with strong prior year comps, and ahead of the market’s 1.7% decline.

ARN continues to focus on growing ratings and gaining revenue share by recruiting and retaining the best radio talent in Australia.

Following a softer survey 1 result in 2019, ARN saw steady improvement over surveys 2 and 3, and a solid result in survey 4. The ARN network of KIIS and Pure Gold is reaching record numbers each week, with over 5 million listeners, up from 2018.

Beyond broadcast radio, ARN’s content consumption continues to grow. While iHeartRadio houses Australia’s most comprehensive library of podcasts, sourced from both local and international libraries, improving listener discoverability remains a key opportunity; the promotion of certain podcasts on-air saw a significant increase in listening during the first half, extending the engagement of audiences from prime time into other parts of the day. As part of HT&E’s commitment to iHeartRadio the Company has secured a licence extension until 2036.

Esports remains an exciting industry with significant global interest and activity and HT&E believes it will become a mainstream and significant content-audience-commercial medium in the long term. Gfinity Esports Australia (HT&E ~ 35% effective interest via HT&E Events) has been at the forefront of this in Australia and has achieved some significant and world-leading results from the Elite Series in 2018 and Rocket League Oceanic Masters in 2019. The upcoming Gfinity Supercars Eseries is expected to deliver new and engaging experiences for both motoring and gaming enthusiasts alike.

Despite these results and progress achieved to date, the economics of esports in the Australian market are yet to yield the sustainable, positive earnings we require from our investments. Further time and capital are likely to be required to achieve this, with no certainty on when a positive contribution might be achieved. Therefore, it has been decided to close the business at the end of 2019, once current commitments have been fulfilled. As a result, HT&E’s net investment in Gfinity Esports Australia (via HT&E Events) has been impaired at 30 June 2019, with an exceptional charge of $5.3 million taken to the Profit and Loss.

HT&E is reviewing all non-audio investments across the Group to determine how they can better integrate into audio, and if not, what alternatives are available to deliver better shareholder value. This includes Emotive, Unbound Group and Soprano Design.

As noted earlier, the Australian radio market deteriorated post the Federal election, and this has continued into Q3. Short bookings suggest the market could be down mid-single percent in the quarter. Recent improvement in briefing activity is being observed for possible Q4 bookings.

Positioning ARN for that uplift is a core part of our agenda for H2. Maintaining the right level of investment in resources and capability is therefore critical to ensuring ARN will successfully exploit its opportunities.

The changing shape of cost of sales as digital revenue grows, contracted talent and other cost increases, and other possible non-repeat savings from 2018, means that cost growth in H2 is likely to exceed revenue growth. A cost and efficiency review is continuing to identify opportunities to reduce operating expenditure.