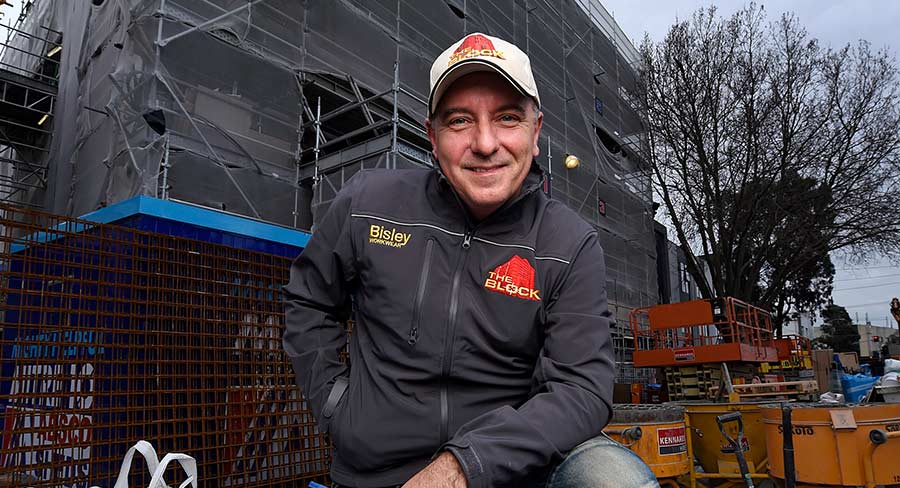 This year Nine’s The Block – season 14 – finished shooting in May and then wrapped post-production just two weeks before it goes to air on August 5.

Co-creators Julian Cress and David Barbour from Cavalier Television need to shoot and edit the open for inspection and auction episodes, but otherwise it is all done.

Julian Cress has taken advantage of the break and returned to his European base in Burgundy, France. It was from there that Cress asked Mediaweek about the latest on the Nine-Fairfax merger. He and the program have been at the forefront of the links between the two companies with The Block and Domain working closely for many series. “I think we could be working even closer now,” he laughed. The cast of The Block 2018 with host Scott Cam

Shortly before talking with Cress, Mediaweek had a tour of the property at the centre of season 14 – the former Gatwick Private Hotel. Seeing what the rundown boarding house has become is one of the most impressive transformations on a series that has made transformation central to its DNA.

“It was a massive project for us,” admitted Cress. “It was a really tough one.”

When asked if the series panned out how the producers thought it would, Cress said, “No. And it never does.

“That is the beauty of making the show. The reason why we still love making The Block every year is that it never goes the way we expected it to. We were certain going into it that the contestants would clamour for certain apartments and we had a prediction of how the first challenge would end up. We were subsequently completely shocked with the way that it went.

“There is a scene in the second episode where contestants are making choices on how they have performed in the challenge. You can see by the look on host Scott Cam’s face that he just doesn’t have any script for what happens. He is not prepared and has no idea what to say next. Nobody was expecting the result to go the way it did.

“Anybody who has watched The Block in the past and enjoyed it will really like this series if they check it out.”

Eagle-eyed viewers of The Block 2018 promos might have noticed Nine gives viewers quite a look at the finished apartments and what the building now looks like. Cress acknowledged that and said they wanted to emphasise the transformation.

“This is the first time we very publicly acknowledged the location before we started shooting. There has much attention surrounding the Gatwick Hotel and the building has been finished since May.”

The renovation work in this season is staggering. “Sheer luxury” is how Cress described it. The size of the apartments and the quality of the work will surely command some hefty sale prices.

Cress told Mediaweek the living/dining area spaces in the Gatwick apartments are bigger than the complete apartments that were renovated in the first season of The Block in Bondi.

One of the big successes for Nine, particularly when the series was re-booted from season three, has been commercial integration.

“The challenge has always been to do that well,” said Cress. “It is easy to sign up sponsors, but it is harder to make it work really well for them. The success of The Block rests on having the sponsors keep coming back so we need to help them achieve their aims. But it also needs to work for our audience watching the show.”

Long-term partners include Mitre 10 and Domain. This year one of the partners is Youfoodz, which delivers pre-prepared meals. “Coincidentally that is what our contestants need at the end of every day. It is not difficult to integrate the right sponsors.”

This year will see around 50+ episodes with four episodes a week across the life of the series, which should run into October. “With a challenge as large as the Gatwick, there has been no shortage of stories to follow with five very different couples taking on a building of that scale.”

Cress doesn’t like predicting what sort of money the finished apartments might attract. “It’s not that I am superstitious about predicting prices – it’s just that I am always wrong. The great thing about The Block is that the end game – the auctions – is a guessing game for everybody including me.”

He did say the quality of the work in the units means they deserve to sell. “We seem to be in what is quite a volatile property market at the moment. It is hard from here to look even three months ahead and know what the market will be like.”

There’s been a fair bit of publicity already about where the 2019 series will be held – just a few hundred metres away from the Gatwick.

“Pre-build preparation will start in October,” said Cress. “We will be filming that series in summer again like we did with the Gatwick. Casting for the 2019 season will begin as soon as this season starts.”