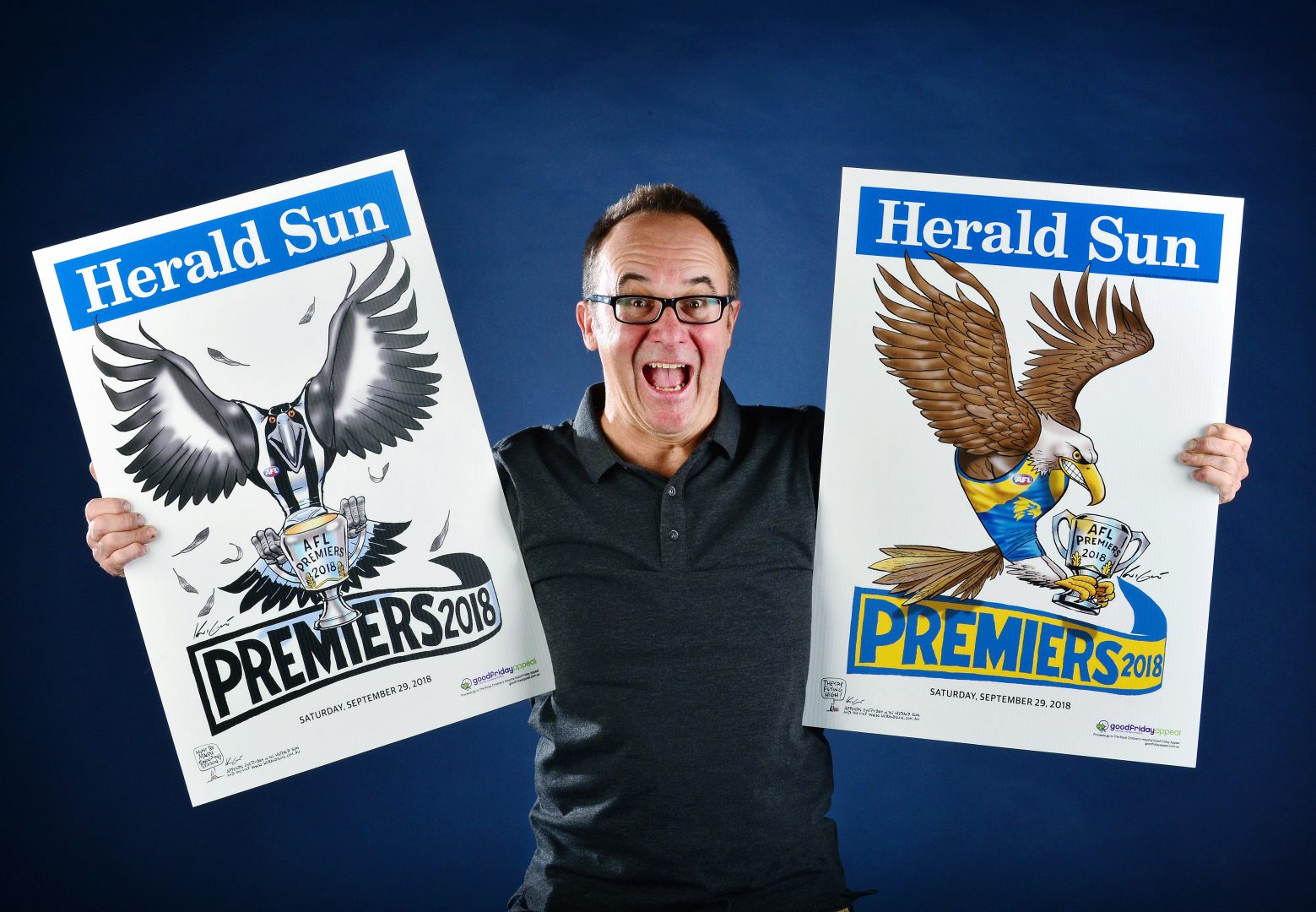 The two potential premiership posters will be revealed ahead of Saturday’s clash between Collingwood and the West Coast Eagles at the MCG.

Knight will be joined by two young fans of the competing Grand Final teams, who have won the opportunity to attend via a competition on Triple M’s Hot Breakfast.

Portia Ronsberg, from Black Rock, has been a passionate Pies supporter for 10 years, attending trainings and following the AFLW. Meanwhile, Mitchell Pittaway, originally from Perth and now living in Taylors Lakes, claims to be the biggest and the loudest Eagles supporter in Victoria. The two footy fans each won the opportunity to unveil the posters, as well as a family footy club membership, and a merchandise pack.

Each year, proceeds from the sale of posters go to the Good Friday Appeal, and ultimately The Royal Children’s Hospital. It is estimated that more than $2.7 million have been raised via Knight’s premiership poster sales over the past nine years alone, following 55 years of WEG posters raising an initial $3 million for the Appeal.

Penny Fowler, chairman of the Good Friday Appeal and the Herald & Weekly Times, said: “Mark is a talented and passionate cartoonist, and his commitment to the AFL Grand Final posters for the past 10 years has helped raise significant funds for The Royal Children’s Hospital via the Good Friday Appeal.

“We are so grateful for his creativity and his generosity.

“The premiership posters are an exciting part of the AFL calendar each year, and knowing the money raised is going to such an important cause in the Good Friday Appeal is a major drawcard for footy fans. I wish both teams the best of luck.”

“We are so grateful to the Herald Sun and Mark Knight for their continuing support of the Appeal, and all the fans who purchase the poster each year, so that The Royal Children’s Hospital can remain a world leader in paediatric care.”

The Herald & Weekly Times has been publishing an official Grand Final poster of the victorious AFL/VFL premiers for 65 years.

The posters were originally the brainchild of cartoonist William Ellis Green – aka WEG – who began his career at The Herald in 1946 and retired 40 years later. He continued to produce the premiership posters until his death in December, 2008. The following year, the Herald Sun unveiled Mark Knight as his successor.

More than 100 volunteers will sell the $3 posters outside the MCG post-match on Grand Final day. They are also available online at www.goodfridayappeal.com.au.