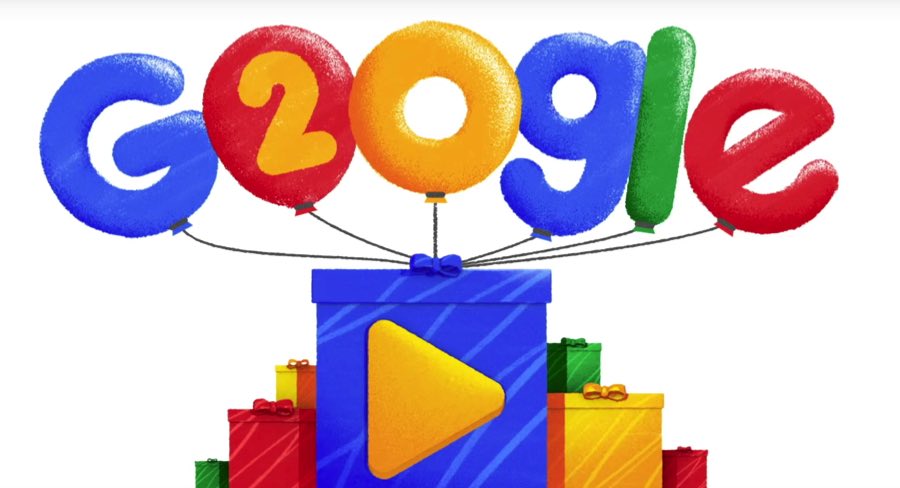 It marked 10 years of its internet browser, Chrome, earlier this month too.

In September 2018, a multibillion-dollar empire was born. Google was founded in September 1998 and this month is celebrating its 20th birthday.

It has been marking the occasion for a number of years with an annual doodle.

In a blog post, The Keyword editor-in-chief Emily Wood wrote: “The exact date of our company’s founding is up for debate, even for those of us who are in the business of providing answers. Google Inc. was incorporated on September 4, but for more than a decade we’ve celebrated our birthday on September 27 – with an annual doodle, of course.” Google reports that it now has seven products that are used by more than one billion people every month.

One of its most-used products, Google Maps, was created in Sydney. The company’s headquarters for the Australia-New Zealand region is located in the NSW capital city. Earlier this month, it also opened a new office in Melbourne.

Globally, the tech giant has operations in nearly 60 countries. It marked 10 years of its internet browser, Chrome, earlier this month too.

On the occasion of its 20th birthday, Google has counted 20 highlights from the past two decades.

• Billions of people have used Google Search to find answers to (literally) trillions of questions every year – from “how to help my community” to “how to find home” to all the many small questions in between. With job search, we’ve helped connect 100 million people to job opportunities in 92 countries.
• Google Maps has helped people find their way with driving directions in 240+ countries and territories, spanning 40 million miles of road – that’s 83+ trips to the moon and back. By connecting people to 150 million places around the world, Maps helps communities and businesses grow. Most moving are the times when Maps has helped people find a sense of place in the world – from Rio’s favelas to one’s own memories.

• People can now talk to their Google Assistant in more than 20 languages, and in some cases it can even keep up if the user is bilingual.
• Translate helps over half a billion people ask for help, make new friends, and say “thank you” across 100+ languages. More than 143 billion words are translated every day – that’s more than 161,000 times the number of the complete works of Shakespeare.
• More than 500 million people use Google Photos every month, backing up more than 1.2 billion photos and videos per day. Photos has also freed up over 410 petabytes worth of space – that’s more than 25 million 16GB devices.
• With the typing time reduced by Autocomplete in Search, the company estimates people worldwide collectively save over 200 years of typing time per day.
• Gmail’s Smart Compose, a new machine learning-powered experience that helps users write email faster, saves people from typing over one billion characters a week – that’s the equivalent of nearly 4 million tweets.
• One billion people visit the Google Account each year to access settings to safeguard their data and privacy.
• Safe Browsing protects more than three billion devices from malware and phishing schemes.
• Gmail blocks nearly 10 million spam and malicious emails every minute.
• Each year for the past five years, Google’s search and advertising tools have helped provide more than $100 billion in economic activity to businesses, publishers and nonprofits across United States.
• Google Play has helped developers grow app businesses and reach users in 190+ countries and across more than 2 billion Android devices. From an app that helps blind people see to a game that creates art, these creators are doing amazing things on our open platforms.
• Since the start of 2017, the company has trained more than 30 million people around the world in a range of digital skills, helping them start and grow businesses, learn to code, and find new careers.
• More than 25 million students worldwide are using Chromebooks in schools.
• Art lovers and history buffs have marvelled at artifacts from 1,500+ museums across 70 countries in Google Arts & Culture. Users have thousands of artworks and 6 million photos, videos, manuscripts and other documents at their fingertips. People have met more than 78 million selfie matches from 650+ institutions with Art Selfie.
• People can access local versions of YouTube in 91 countries around the world across 80 languages – covering 95% of all internet traffic. Every day, people watch learning-related content over a billion times on YouTube.
• Google has activated SOS Alerts to provide better access to emergency information in more than 200 crisis situations. People have viewed Public Alerts – for things like storm warnings or hurricane evacuation – more than 1.5 billion times.
• Since 2005, Google has donated more than $1.5 billion to organisations working to help refugees and disaster victims, fight for equal justice, provide teachers with classroom equipment, and teach people new skills. Over the past four years, Googlers have logged over a million hours (that’s 114 years’ worth) volunteering in the communities where we live and work.
• People have used Nest thermostats to save 25 billion kWh of energy – roughly enough to power Ireland for a year.
• Thousands of developers have used TensorFlow, Google’s open source tool for deep learning, to make farming more efficient in Japan and the Netherlands, predict wildfires and prevent deforestation, track whale migration and identify birdsong – and even detect cancer.