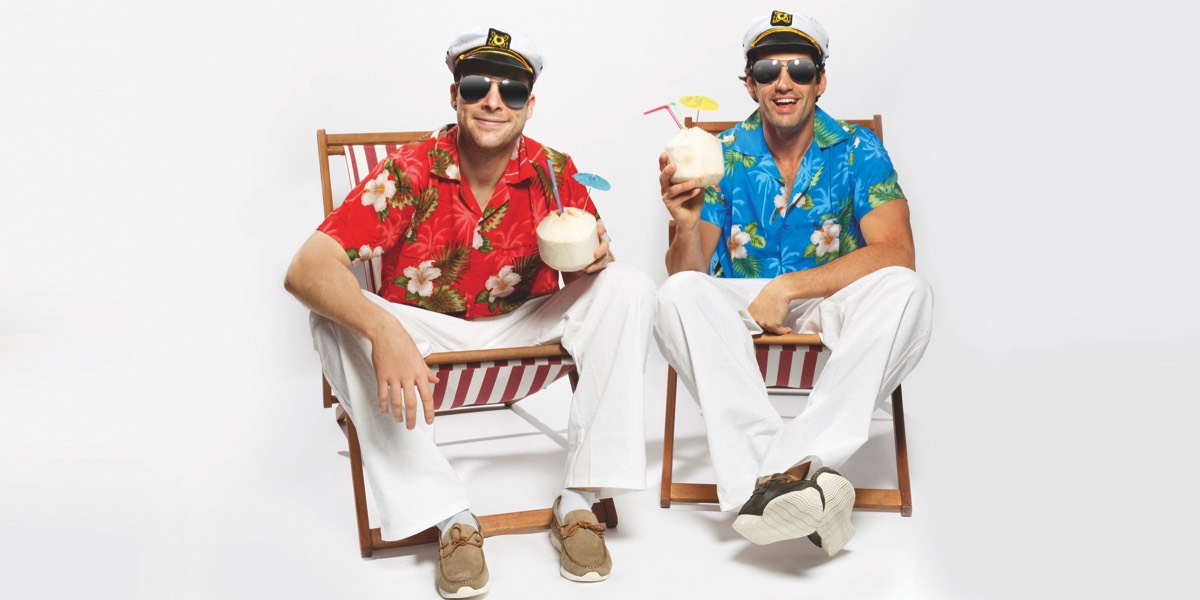 When popular comedians Hamish and Andy returned to SCA and drive radio last year, there was a lot of pressure on the show to deliver for the network.

ALSO: Hamish and Andy set to return to Nine in 2017 with new series

“A lot of my job was managing the expectation from the business and managing different demands,” Cavanagh recalled. “Everyone was so excited to have them back in that time slot that there was an overwhelming response and request for their time and focus.

“A lot of my job in the first three to four months was managing that and helping us stay focused on what was important, which is making a good radio show.”

Cavanagh’s journey with Hamish and Andy dates back to the days when Hamish Blake was a writer on the Fox FM breakfast show called Tracy & Matt In the Morning. The show ended its six-year-long run in late 2003. Cavanagh was an assistant producer on the program. It was near the end of Tracy & Matt’s run on Fox, that Hamish pulled in Andy Lee to start a new late-night show called The Almost Tuesday Show.

Cavanagh was united with the duo when their late night show was given a 10am slot on Saturdays – this resulted in the show’s name being changed to The Almost Midday Show.

The trio (Hamish, Andy and Cavanagh) tasted the heights of success in radio when they moved to drive on Fox FM in 2006.

Hamish and Andy, along with Cavanagh as the EP, took over drive on Fox FM in February 2006. In the less than six months, SCA made the decision to run the show on airwaves all around Australia. The Hamish and Andy Show (as it was called then) became one of the first national drive shows in the country. It aired on the Today FM Network (now called Hit Network).

“When the show started becoming successful Craig Bruce (who was the program director for 2DayFM at the time) created a network executive producer role just so that I could work for the development of our producers around the network.

“That involved running training sessions, producer conferences, helping with hiring and generally being a resource for all our producers to lean on,” Cavanagh explained. Craig Bruce with Hamish and Andy

At the height of success for The Hamish and Andy Show, Cavanagh wore two hats at SCA – he was the EP for the drive show and a network executive producer.

When Hamish and Andy hung up their headphones in 2010 to pursue other opportunities, Cavanagh shifted his focus solely to his network role. Then, six years later when the duo announced their return to radio and SCA, Cavanagh said, “It was too much of a good opportunity to pass. It was like getting a band back together.”

Along with being the EP of the national drive show, Cavanagh still holds his network title.

Something that’s changed significantly in the Australian radio landscape since Hamish and Andy first entered the drive time slot in 2006 is competition. Back in the day, there was only one national drive show in Australia. Fast forward to today, each of the three metro radio broadcasters (Nova Entertainment, SCA and ARN) has its own national drive show, each with its own loyal fan following.

However, Cavanagh is unfazed.

“It’s such a great time for the industry where there are so many fantastic shows on the air. I see that as a real positive,” he commented.

“Hughesy and Kate (on the KIIS Network) is such a well-established show. Nova’s Kate, Tim and Marty is hilarious. They have a unique show.

“To me it’s a great time to be in the industry when there is a clear investment in talent and content. Compare our industry to US, which is going in the complete opposite direction – I think is a real benefit.

“We are lucky because we have never been too focused on the ratings and competition. We’ve always been pretty clear, we are having fun and doing the things that we love.

“I’ve seen a lot of other shows be really focused on the competition and it’s a) Not a lot of fun b) It puts them off their game.

“We like the guys on the other shows,” Cavanagh laughed. “My girlfriend works on another network and we have friends who work on other networks.

“As long as we are doing our own thing well, it’s a big enough pie for everyone to share.”

Having said this, Cavanagh quickly followed up: “Make no mistakes, it’s always great when we are rating well, but we are not too focused on ratings. To put it into perspective, as a show we have never once gone out and spent a lot of money to celebrate a jump in the ratings. If I focus on it that much, we might go down in the next survey. Then what?

“It’s my job to produce a really good show each afternoon. If I thought being focused on ratings would help us do that, then I would.” 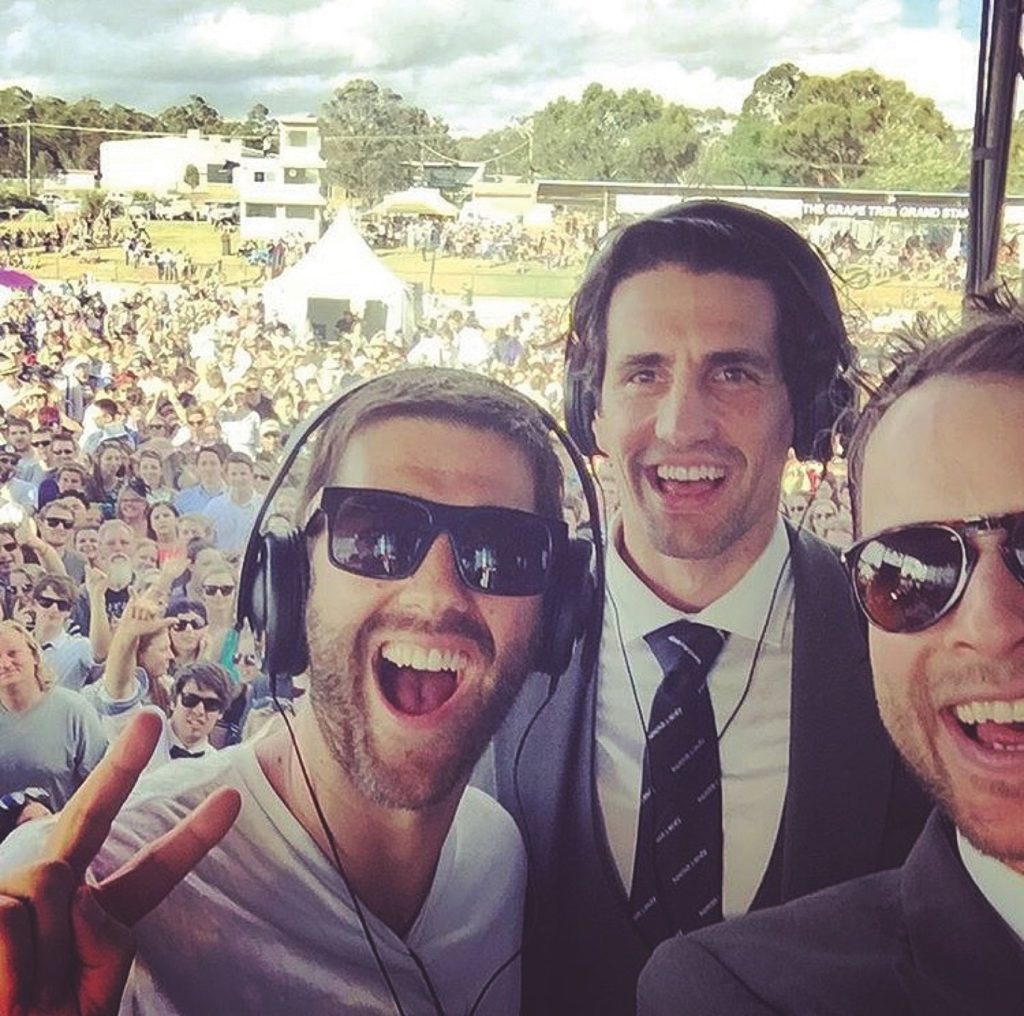 The Hamish and Andy pull factor

When Hamish and Andy announced their return to radio early last year after several TV gigs, their return was well documented by the local media circuit.

The first part of the frenzy was about how well they will be welcomed back by their audience. The second part was about the high hopes held by SCA for the program to do well and turn its fortunes around at 2DayFM.

Cavanagh admitted that there was a lot of pressure when it first started. At this time it became important for him to take unwanted influences and discussion out of the team’s creative space – it is something that he still pays a lot of attention to.

The show is successful right now because it is effortless, Cavanagh said.

“There isn’t a secret to it. There is no real performance. What you hear on the air is who they are.

“We do everything on the air because they think it’s fun. They thought it’d be fun to take a whole lot of listeners and do a live show from a cruise ship for a week, so that’s what we are doing.”

This was how Hamish and Andy’s People’s Cruise came about.

“It’s pretty easy to listen to people who are genuinely having a good time. Nothing they do feels forced, because it isn’t.”

The production process behind each show

When many people sign off from work each weekday, that’s when the real show begins for Hamish and Andy. The Hit Network drive show airs for two hours each weekday 4pm-6pm.

On a usual workday, Cavanagh enters the SCA office in Melbourne between 8:30am and 9:30am. Then the team of producers gathers for a catch-up meeting at 10:30am to update each other on what they’ve been working on.

Hamish and Andy enter the building by 12:30pm. Then the team gathers once again to discuss the day’s show and pitch ideas.

“Most of the planning meetings involve kicking one or the other out of the room,” Cavanagh laughed. “Hamish will kick Andy out because he has this idea that he wants Andy to hear for the first time live on air, and vice versa.

“We always want the guys’ reactions to be authentic on air.”

The afternoon before the show is spent on pre-recording interviews when needed, filming sketches and/or pranks.

The team calls it a day soon after the show finishes, Cavanagh said. “Unlike breakfast we have the whole day to prepare, so we don’t need to focus too much on the next day’s show until the next day,” he noted.

Hamish and Andy’s The People’s Cruise 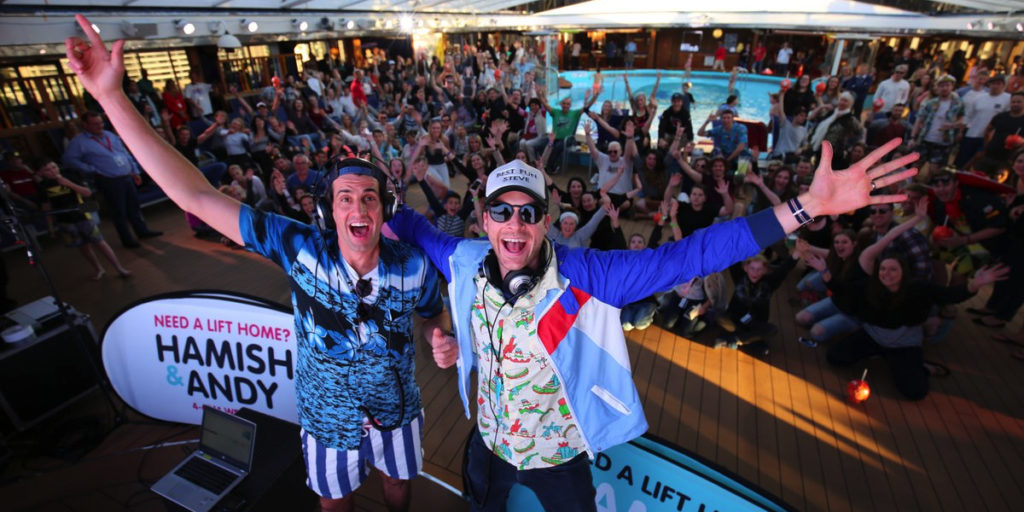 Hamish & Andy on the People’s Cruise

The boys and 110 of their listeners will set sail from Sydney to Vanuatu later this month on Carnival Spirit Cruise. Hamish and Andy will broadcast the drive show live from the ship during the five-day voyage.

The only way for listeners to win tickets was by registering their interest on Hamish and Andy’s website. The winners were then contacted by the Hit Network breakfast shows and the national drive show on air. When contacted, the winners had to answer the call sounding like they’d been disturbed during a nap.

“The People’s Cruise contest has brought an unprecedented amount of integration and support between the breakfast shows and the drive show,” Cavanagh said.

“That has never been done on this network before.”