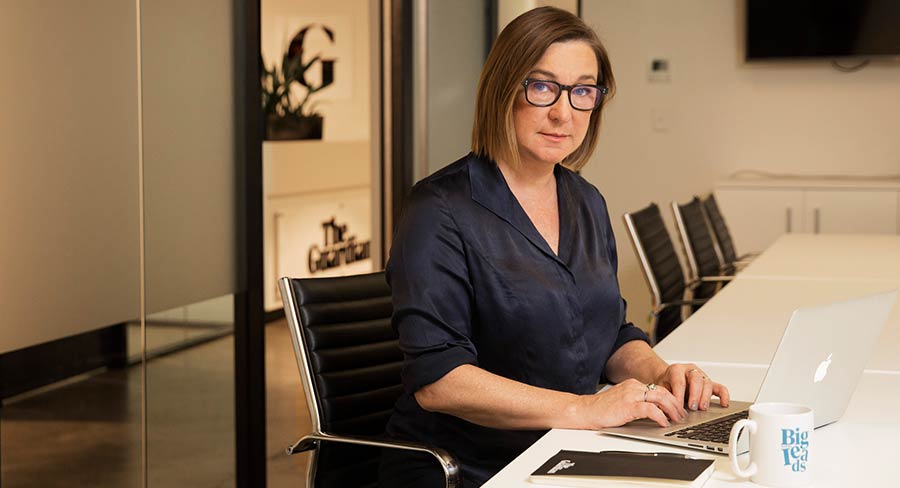 • Profits now being reinvested into business to fund expansion

Guardian Australia recently released its recommendations to the ACCC digital platforms inquiry, with hope the ACCC findings might be a blueprint for platform regulation in Australia and perhaps elsewhere.

Guardian Australia editor-in-chief Lenore Taylor told Mediaweek it faces the same challenges as other publishers. “Everyone is facing the same issues in terms of online advertising. The Nine-Fairfax merger means we are competing in an ad market against a couple of really big players. That means our expansion is important to us, we want to be big enough to compete in this market as an Australian business.”

Despite those challenges, the publisher will make a profit for a second successive year and is planning expansion.

Guardian Australia has joint income streams with advertising and reader contributions significant to the business model.

Taylor explained: “Reader revenue for Guardian Australia is over 40% of total revenue and increasing quickly. We imagine within the next three years reader contributions will probably account for 50% of our revenue.”

Regarding what moves the ACCC could consider, Taylor explained Guardian Australia has several recommendations. “The most important one for us would be changing the tax act so we could get DGR (deductible gift recipient) status in our own right. At the moment we accept philanthropic donations, in order to get DGR status for those donations we have set up a sub fund through the University of Melbourne and we have a collaboration with them where we help them educate journalism students – we take interns and give lectures.

“We don’t know how big a part of our activity philanthropy might be, but in the United States it is quite important in funding journalism.

“As we go through a transition as we figure out the model, it is quite important for us.

“We are interested to see how the debate goes where people flesh out the idea of tax credits – similar to the way they work in the film industry. We think it is an interesting idea and worth having a look at.

“We are keen to have a better look at all those ideas.

“We are less keen on the idea of direct government funding or expanding the regional small publisher’s fund. Our experience when that fund was set up was that it was a totally politicised process and we think that is likely to be the case no matter who is in government.

“There are inherent independence dangers in direct government funding. If there were a fund we would probably apply to it. We think it would be better if the ACCC recommended that there was more arms lengths ways of giving assistance to journalism.”

About recent initiatives to fund new journalism from Judith Neilson and also Eric Beecher with John B Fairfax, Taylor said: “They are both good things. Eric Beecher has convinced his backers to put some more money into his business. Good on him, if there is more journalism, that is fine.

“We have applied to the Judith Neilson fund to ask them to consider a project we would like to do. Hopefully that happens and that is a hugely positive thing.

“You can’t stake the future of public interest journalism on philanthropy because by definition you are not sure if it is going to continue. That doesn’t mean philanthropy isn’t to be encouraged and isn’t a terrific thing. It absolutely is.”

Taylor said what actually happens following any ACCC findings could rest on the outcome of the election. “Everyone can see there is an issue with journalism at the moment. I would imagine any incoming government would consider a review that has been undertaken with this amount of consultation and this amount of consideration.”

Guardian Australia’s ACCC submission includes a summary of how the business is progressing in Australia. It maintains an overall staff over 70 with 40 of them in editorial. “We will also be expanding that quite considerably in the not to distant future,” Taylor told Mediaweek.

“We made a profit last year and will make a profit again this year and that profit gets re-invested into the Australian business.

“Our readership is increasing quite quickly and financially it is going pretty well.”

• Guardian News & Media Australia (GNMA) welcomes the ACCC’s focus on mechanisms to maintain the incentives on print/online news media businesses to invest in news and journalism, particularly those types of news and journalism which may be at risk of being under-produced”.
• GNMA believes that there are more effective ways to support journalism than through the Regional and Small Publishers’ Jobs and Innovation Package.
• GNMA welcomes the proposal to focus on tax offsets as the method for enabling independent media businesses to retain revenues for reinvestment in more civic journalism, written by and for Australians.

GNMA believes that the primary focus for the ACCC review should be on supporting a plurality of independent, commercial, high-quality news publishers that hold views across the political spectrum. Mechanism to increase investment in civic journalism should prioritise the creation of an efficient system of taxation and tax reliefs and the allowance of philanthropic funding to fund elements of that civic journalism.