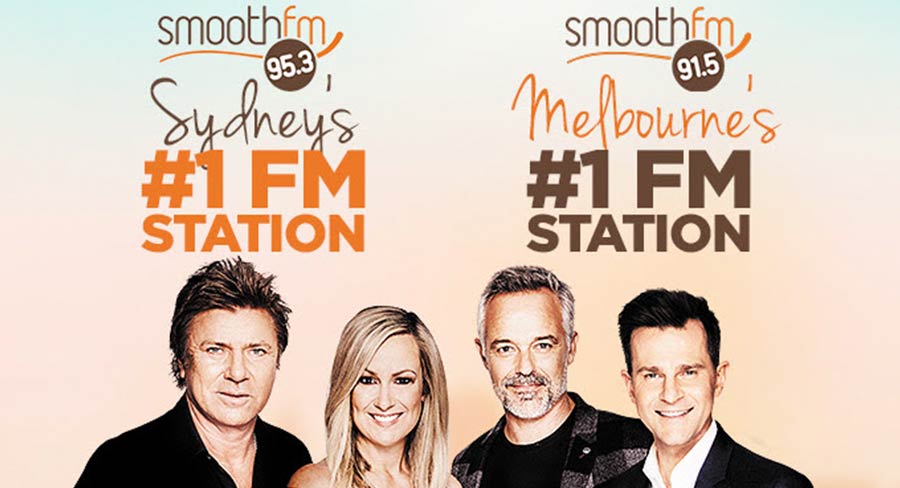 3AW 14.8%: Another good year for the now Nine-owned Macquarie Radio Melbourne station. 3AW has ended the year with its best 2018 share, while breakfast with Ross and John was not far off its best of 20.0% with a survey eight breakfast share of 19.4%. Morning, drive and evening were all overall timeslot champs, and afternoon was #1 AM, nearly double the ABC Melbourne share.

smoothfm 91.5 10.6%: Nova Entertainment is now able to boast the #1 FM station in Sydney and Melbourne which must be a powerful selling point for the sales team. 91.5 has recorded its highest ever 10+ and breakfast shares. smoothfm was the biggest 10+ mover in the market – up 0.8 as the station posted its best share of the year. Also setting a new record for 2018 was breakfast with Mike and Jen with share also up 0.8 to 8.9%. That is also their best for the year and the biggest mover in Melbourne.

Gold 104.3 9.7%: Despite ranking #2 FM, the station was short of its best this year, which was 10.8% in survey four. That survey was also when breakfast posted its best number this year – 8.7%. However Christian O’Connell has recorded his best ratings this year on 8.4%, which is his second consecutive lift. And get this – he is now outrating Eddie McGuire and The Hot Breakfast. Quite an achievement for a visitor that none of the audience had heard of just a few surveys ago.

101.9 Fox FM 9.6%: End of another good year for the Hit Network’s best performing station, which ironically doesn’t brand itself “Hit”. Cracking year too for Fifi, Fev and Byron as they dominated breakfast ratings all year. Fox is short of its best 10+ though after recording 11.4% and this is its third consecutive survey in single figures. Breakfast was also in double figures for much of the year with three surveys on 10.3%. But considering the Fox breakfast show ended last year on 7.0%, it has been a massive turnaround year. Need to also pay tribute to drive newcomers Hughesy and Kate who end the year #1 on 11.0%.

Nova 100 7.5%: Overall numbers were lower this year. Although 7.5% is the best 2018 result, it would have ranked as its sixth best rating last year. Chrissie, Sam and Browny ended with one of their lowest shares of the year – 7.2%. Their best was 8.4% in survey one. Kate, Tim and Marty are #2 at Xmas, although they have narrowed the gap between them and Hughesy and Kate.

105.1 Triple M 6.8%: The station has ended the year with its third best share. The high point was 7.4% way back in survey one. The Hot Breakfast has recorded its best share of the year – 8.3% – but Eddie, Wil and Darc won’t like trailing Christian O’Connell. It was also The Hot Breakfast’s only survey over 8% this year. Disappointing end to the year for Mick and Jane in drive where they rank #5 out of six FM stations.

KIIS 101.1 FM 6.1%: Almost good news for the station with its best 2018 share. But then if that’s the high, it can’t have been a great year. Kiwi radio stars Jase and PJ were close to their best – which means they were short of 5.9%, which they had three times this year. The station was over 6% all afternoon this survey including Will and Woody.

Macquarie Sports 1278 0.1%: You don’t need Mediaweek to point out the obvious here. The best was 0.4% in two surveys this year. Breakfast has an asterisk, which is also not good after a high of 0.2% earlier in the year. Perhaps too early to label the format a fail until the cricket season is over, which could drag in some converts.