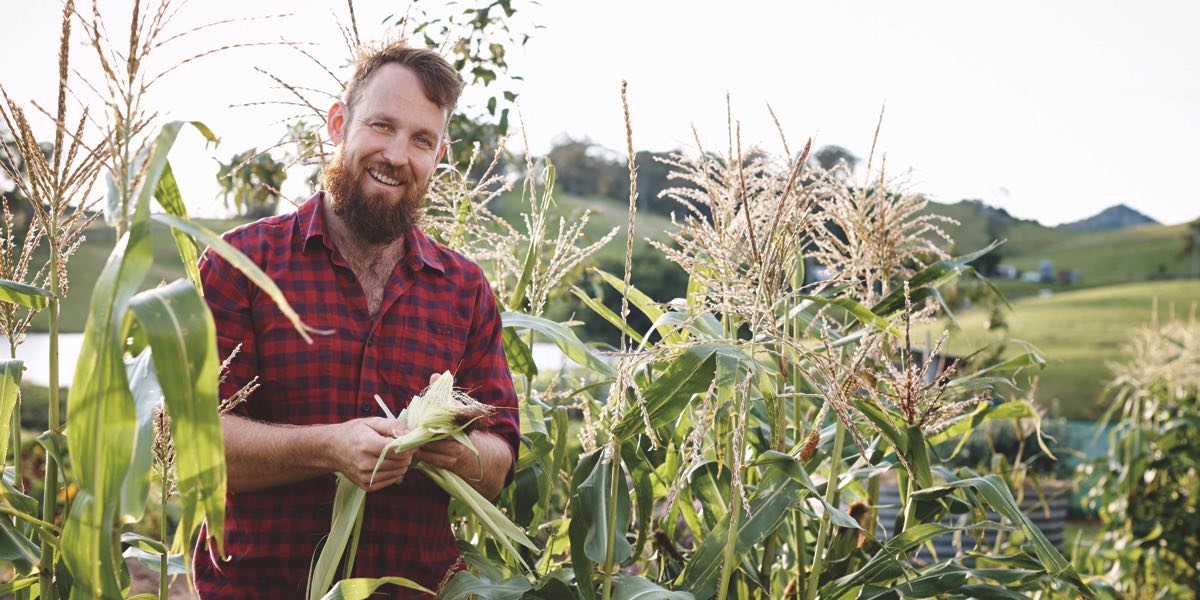 Paul West admits that he is living the dream. The 32-year-old host of LifeStyle FOOD’s River Cottage Australia never intended to have a TV career, but is beyond happy that he stumbled into one.

“I was just growing vegetables and being a chef in Tasmania. Someone told me about the casting call and I threw my hat into the ring and here we are three years later with the fourth season about to go to air,” West recounted. “Dreams are something that are often only partially grounded in reality, but this is about as close as you can get while still having a heartbeat.”

Supporting West is his partner Alicia, who West insists keeps him grounded. While West doesn’t think he’s changed at all, he appreciates that she finds his TV career “amusing and fascinating in equal measures”. West appreciates that while his newfound career has been a big change in his life, it has impacted on hers as they both had to move to the mainland from Tasmania.

River Cottage Australia is now in its fourth season. The show is an Australian spinoff from the UK series River Cottage, hosted there by UK chef Hugh Fearnley-Whittingstall. It is the first time that a foreign version of the show has been commissioned. The Australian series, presented by West, films on his hobby farm in Central Tilba in New South Wales.

The series is made in Australia by KEO Films Australia, a partnership betweek KEO UK and Leonie Lowe.

Considering his development as a TV host in the time since the first season, West bellowed with a laugh as he noted just how green he was at first. His hosting ability has improved dramatically, he insists, but says that his expertise with food has been consistently strong throughout the years on the show: “I was green as grass. Probably even greener, if that’s possible. I always look back at that first season and have a shudder at how unbelievably awkward I was. Food-wise, I don’t think there’s been a great deal of change. I think the food was always in the right place.”

Being able to develop his communication skills as a host was something that took West time to develop. “It takes a while to find that sweet spot of being able to articulate concepts in a concise and clear manner and with confidence, while keeping it entertaining and maintaining that confidence to not feel like you have to crap on for five minutes to say something.

“It’s something I’d like to think I’m pretty close to achieving. Obviously there’s always room to improve on what we do, so I wouldn’t say that I’m a gun, by any stretch of the imagination, but my presenting abilities have certainly seen a vast improvement since season one.”

While the show itself has been great for West professionally, he expressed excitement at what it has been able to do for his own ideologies in regards to sourcing his own food. The ability to develop relationships with growers in his local region has enabled West to completely cut out trips to the supermarket for any produce. West explained that while he still goes to the supermarket to buy toothpaste and other necessities, he finds it difficult to go back to supermarket food which may be several days old by the time it reaches his region.

West is focused on presenting a realistic depiction of food on his program, hesitant to allow the show to be too fluffy. “What I really have strived to do, myself and the series producer, especially this last season, is to work some broader food cultural issues into the show.”

West is realistic that there is only so far he can push his agenda in the confines of a lifestyle program. “We’re trying to use the show as a vessel for subtle education. Not in a kind of soapbox ranting, this is what you should be doing kind of approach, but more in the celebration of the benefits of things we do. Leading by example. The more of those sneaky issues that we can get in, the happier I am.”

LifeStyle and KEO, West insists, are enthusiastic about the direction that he’s taking.

West’s attitude extends beyond the show and any commercial opportunities. While many celebrity chefs push their fame onto branded products, West is adamant his integrity would be destroyed if he allowed his face to be used on a mass-market food line: “I don’t want to do that. Pre-prepared food is industrial food. It’d have to be made somewhere. Half the stuff in those lines are made overseas because the Australian food manufacturing is so unaffordable. Your biggest aspiration is to get it in the supermarket at Woolies or Coles – the total antithesis of everything the show is about.

“It would be hugely hypocritical for me to leverage my public profile within my field to do something like that. It’d come unstuck and picked to pieces straight away,” he said.