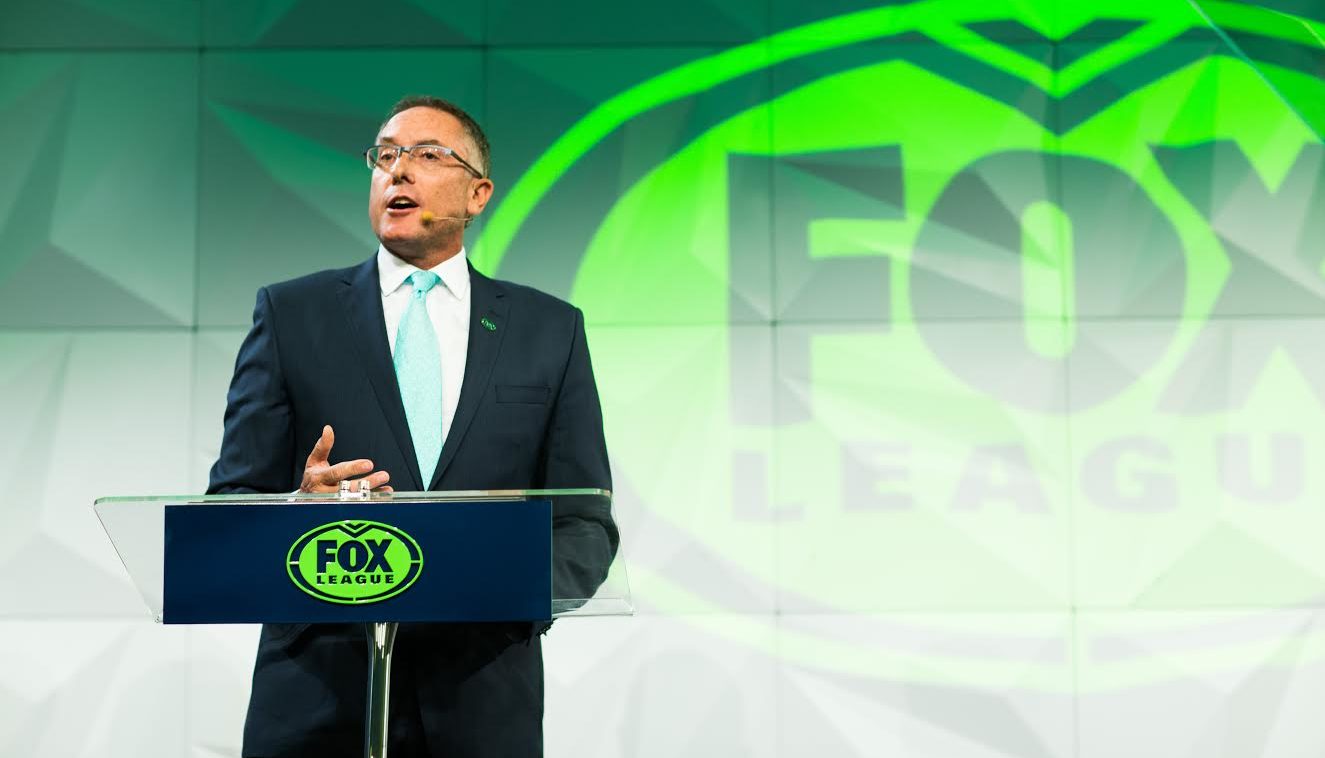 What to watch on Fox League this season

Switching on February 20, channel Fox Sports 502 will becomes Fox League, with all shows kicking off from February 27 in the lead-up to Round 1 kick off on March 2.

Joining the Fox family in 2017 is the highly sought-after sports presenter, Yvonne Sampson, who will lead a new era for Rugby League coverage alongside one of Australia’s brightest broadcasters, Matty Johns.

In 2017, fans will hear from more of the most respected female sports presenters in the country with Sampson joined by Hollis, Lara Pitt, Megan Barnard, Tara Rushton and Jess Yates to feature prominently across the week’s programming.

Fox Sports CEO Patrick Delany said, “This is a game changing day for NRL. We’ve listened to fans and responded to their desire to see their game celebrated and enshrined in a place all of its own. That new place is Fox League. We are going to make what is already awesome, more awesome!”

Fox Sports Head of Television Steve Crawley said: “Fox League will put Rugby League onto the world map of sports broadcasting. It will be like no other and nothing Australian sports fans have ever experienced.

“We have an army of producers charging the channel and we have assembled the biggest, and best, line-up of talent possible. This channel has it all and we can’t wait for fans to experience it.”

Foxsports.com.au will be the ultimate online destination with all the news, videos, stats and analysis plus the most comprehensive live Match Centres in the game and NRL SuperCoach. Australia’s only dedicated 24/7 sports news channel, FOX SPORTS News 500 will have nightly dedicated bulletins with the return of NRL Tonight plus extensive league coverage across the day. 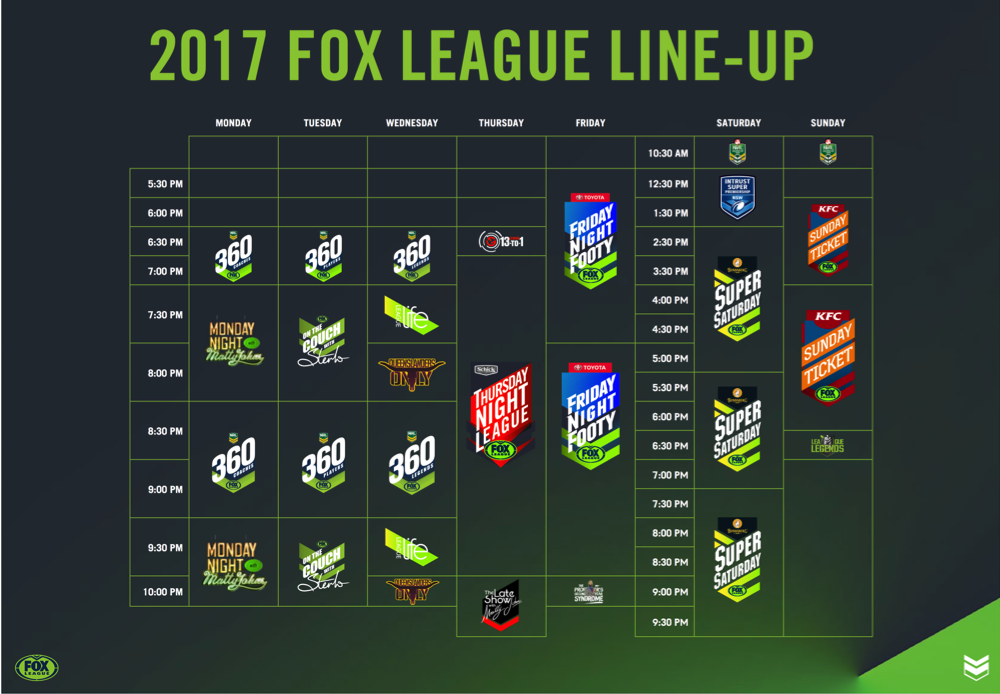 NRL 360,  Monday-Wednesday 6.30pm
From Monday to Wednesday, Ben Ikin and Paul Kent set the NRL agenda by dissecting all the big talking points impacting the game from every angle. Origin Coaches Laurie Daley and Kevin Walters combine for Coaches’ Night each Monday. Wests Tigers’ Aaron Woods, the Bulldogs’ James Graham and the Broncos’ Benji Marshall team up for Players’ Night on Tuesdays, while Billy Moore returns for Legends’ Night on Wednesdays. A collection of renowned Rugby League journalists, including Buzz Rothfield, Andrew Webster, Paul Crawley and Dean Ritchie will feature across the week to offer their take on the biggest news stories.

On the Couch with Sterlo, Tuesday nights at 7.30pm
League legend Peter Sterling is joined each week by NRL greats Corey Parker, Michael Ennis and Steve ‘Blocker’ Roach, plus NRL news- breaker James Hooper for On the Couch with Sterlo, at the new time of 7.30pm on Tuesday nights. Some of the biggest names in the game will join the team on the couch, plus Sterlo sits down with current and former players for insightful one-on-one interviews.

League Life,  Wednesday nights at 7.30pm
League Life will see Yvonne Sampson, Lara Pitt, Jess Yates and Hannah Hollis combine for Australia’s first all-female sports panel show, League Life, each Wednesday night. The 30-minute program will deliver topical discussion and debate about the key issues and talking points along with stories from grass roots and those living the League Life. It’s going to be a lot of fun with some very different views on the game among the panel.

Queenslanders Only, Wednesday nights at 8.00pm
By Queenslanders. For Queenslanders. This is the show all NRL fans in Queensland have been waiting for. Robert ‘Crash’ Craddock is joined by a rotating panel of Queensland Rugby League legends, including Mal Meninga, Kevin Walters, Gorden Tallis, Corey Parker and Justin Hodges for a special take on the NRL news.

Rugby League finds a new home on Thursday nights, with a blockbuster clash set to start the weekend early. Thursday Night League will launch the round, with host Yvonne Sampson combining with an expert panel to deliver the best discussion and analysis of the game each week. Some of the biggest names to have played the game, including Matty Johns, Mark Gasnier, Michael Ennis, Corey Parker, Justin Hodges and Braith Anasta will feature alongside FOX LEAGUE presenter Megan Barnard to guide viewers throughout the night.

The Late Show with Matty Johns, Thursday nights from 10.00pm, after the footy

NRL fans will have more Matty in 2017 with Matty Johns and his regular team of Gorden Tallis, Nathan Hindmarsh, Bryan Fletcher and The Professor teaming up for The Late Show with Matty Johns each Thursday night after for a preview of the weekend’s footy. Viewers can kick their weekend off early with a raucous mix of jokes, banter, pranks and leftfield analysis.

Friday Night Footy, Friday nights from 5.30pm
FOX LEAGUE will be the destination for NRL fans seeking their Friday night footy fix, with double the action every week. FOX LEAGUE will be the only place to catch the weekend’s opening double-header, with host Matt Shirvington joined by a rotating panel of experts, including Mark Gasnier, Kevin Walters, Justin Hodges, Braith Anasta and Steve Roach to preview and review the action, while Megan Barnard delivers the latest news throughout the night. It all kicks off at 5.30pm, with the first game of the night EXCLUSIVE to FOX LEAGUE, before a prime-time blockbuster launches at 8.00pm.

The Professor’s Second Year Syndrome, Friday nights at 10.00pm, after the footy
The breakout star from Monday Night with Matty Johns, James ‘The Professor’ Rochford, is back in 2017 with a brand new show of his own.

The Professor’s Second Year Syndrome will be satire at its sharpest, poking harmless fun at the game, clubs and players we all love. The Professor will be joined by Rugby League great Brett Finch, Triple M’s Chris Page, plus special guests each week.

Super Saturday, Saturdays from 3.00pm
FOX LEAGUE’s biggest day of NRL action returns in 2017, with up to three LIVE, ad-break free during play and EXCLUSIVE games back-to-back on Super Saturday. Matt Shirvington will host the opening match LIVE from the ground, before Yvonne Sampson takes the reigns from FOX LEAGUE HQ. League legend Greg Alexander, plus a rotation of experts, will be on hand to offer their expert insight and analysis.

Sunday Ticket, Sundays from 1.00pm
Jess Yates steps into the hosting chair on Sundays alongside Braith Anasta, Michael Ennis and Lara Pitt to deliver a LIVE, ad-break free during play and HIGH DEFINITION double-header on Sunday Ticket. There’s no place like home on a Sunday, and the team will guide viewers through both games as they kick-back, relax and settle into a leisurely afternoon of Rugby League action.

League Legends,  Sunday nights at 6.30pm
Hosted by one of Australia’s most respected television sports journalists, Tim Sheridan, League Legends is a series of insightful one-on-one, in- depth interviews with some of the biggest names to have ever played the game. Nothing is off limits in this revealing new series which delves deep into the lives and stories of Australia’s greatest Rugby League players, detailing the highs and lows of their careers both on and off the field. Some of the legends set to feature on the premiere season include Noel Kelly, Chris Close, Mal Meninga, Max Krilich, Mike Cleary, and Tom Raudonikis.