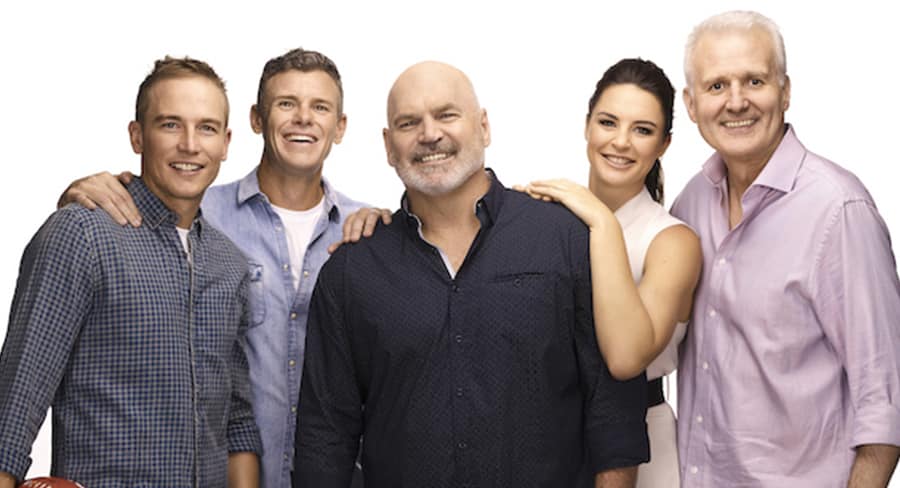 Jason Dunstall and his colleagues at Bounce and the Fox Footy channel had a difficult time ending the show for 2019 and then deciding whether to carry on in 2020.

They tragically lost their colleague Danny “Spud” Frawley in September 2019.

Bounce is returning in 2020 on Fox Footy with Dunstall and the rest of the extended team returning this Sunday. Dunstall told Mediaweek they were continuing the show as a tribute to their colleague.

“Spud and I had been there since day one which is about 12 years ago. It is hard when you have lost a great mate. I think his legacy will live on strongly through the course of the show. He would be sitting up there watching us, going ‘You have got to do something.’ We want to do justice to his memory and hopefully the show will help us do that.”

Dunstall said it is impossible to replace Frawley because he was such a unique character. “The future is about the rest of us stepping up and doing a bit more. Certainly Andrew Gaze is going to play a much bigger role in the show. He’s a man that everybody loves. We will have a lot of with him on the show this year.

“Cameron Mooney will also be there as will Bernie Vince and Sharni Layton.

Dunstall added about their netball and AFLW star, “I love Sharni, but only in small doses! She is so comfortable with what she does and being part of the team. She sticks up for herself, and has a great sense of humour.”

Another team member may have to lift a bit, suggested Dunstall talking about Moons – Cameron Mooney. “I always say he could just sit there and take his shirt off and all the women watching would be very, very pleased! He spends the entire of season fine tuning himself in the gym.”

Bounce goes to air after the last game of the round every Sunday – a timeslot that could have some changes this year given the way the AFL might move games around.

“I will just turn up when I’m told to. Hopefully people will still want to wind down at the end of a weekend because there are so many serious shows with discussions and debates about footy. Sometimes it is nice not to have to think and just have a bit of fun.”

Dunstall is again providing special comments on a couple of matches every weekend on Fox Footy in addition to joining the studio team for Thursday or Friday nights.

He enjoys the nights when on duty in the Fox Footy studio hosting a game. “The studio is fun, very relaxed. You get to work closely with some really good people. We have great camera operators and great floor managers and we all have a bit of fun.”

Dunstall will use stats when necessary, but he explained: “Sometimes we worry too much about numbers instead of relying on what we are seeing. It can be good to just talk about what you are seeing, rather than looking at the numbers first and then justifying what they say. There are different ways of looking at games and we all try and bring something new in our comments.”

After giving up radio after the end of the 2018 season, Dunstall is happy to be exclusively on Fox Footy with its talented team. “They are a ripping bunch of people and we all get on very well. There are a few healthy egos, but we tend to keep them in check.”

As to people who Dunstall most enjoys working with, he named another legend from the forward line.

“Nick Riewoldt and I have always got on well. We love doing games together and we have a lot of fun.”

Dunstall doesn’t mind the travel to games when he has to. “Because of Bounce on a Sunday I rarely get to do Perth games.” When he does he has no problem sleeping on the plane on the way home. “I am very good at that!”