Under a burst of Autumn sunshine on a rooftop at Crown Towers, Foxtel executives yesterday pulled the covers off the talent driving a new season of Fox Footy.

The only thing more impressive about Foxtel’s Fox Footy channel than its rights deal (every game of the year live and ad-break free bar one) is its talent line-up featuring over 40 commentators, journalists and former stars who live and breathe the national winter sport.

Two new shows arriving on the schedule, and still being fine-tuned in pre-production, are Premierships and Footy Trips from former Gogglebox TV critics Adam and Symon, plus Narrow World of Sports, an ambitious Friday night two-state project from James ‘The Professor’ Rochford and Andrew ‘Barney’ Barnett. 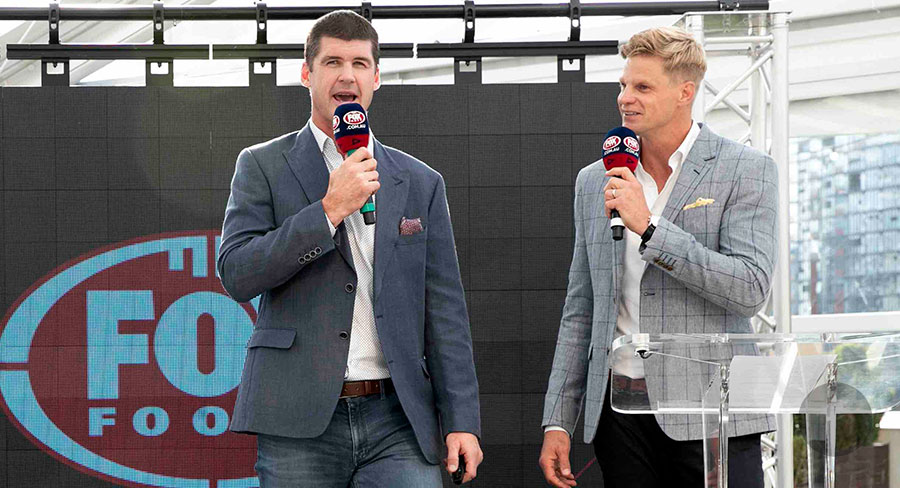 The footy launch was hosted by Jonathan Brown and Nick Riewoldt with help from Sarah Jones and Eddie McGuire. With Fox Sports boss Peter Campbell and head of TV Steve Crawley at the launch, Riewoldt mentioned he and his Fox Footy colleagues were hopeful that a recent salary hike for US commentator Tony Romo might make ripples in Australia. (CBS is to retain US NFL analyst Tony Romo at US $17 million annually). Joining Campbell and Crawley from Sydney were Foxtel group director of publicity and talent Jamie Campbell and Fox Sports director of marketing and communications Brendon Moo. Busy Fox Footy publicist Stefanie Rezzara was trying to wrangle 30+ commentators and hosts between TV and press interviews and photo shoots with one of Melbourne’s finest photographers Fiona Hamilton. 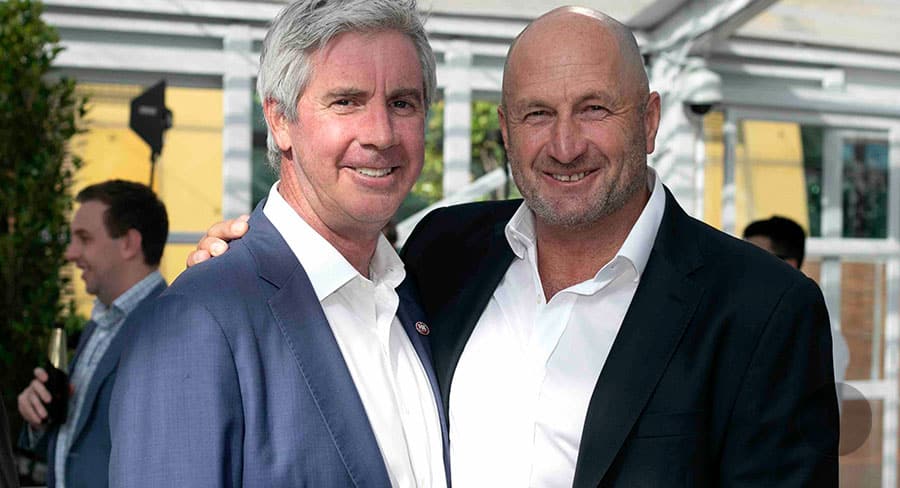 Fox Footy programming highlights for 2020 include:

• For the first time, the weeknight AFL 360 show hosted by Gerard Whateley and Mark Robinson which feature every coach during the season. Other guests will be newly-appointed Melbourne captain Max Gawn, Carlton cult figure Eddie Betts, Richmond star Jack Riewoldt and Collingwood gun Adam Treloar will feature on Players Night on Tuesdays. On Wednesdays, the legends are back, with Shinboner David King and Big Blue Mark ‘Sellars’ Maclure prepare to debate and unpack the biggest stories of the round.

• On The Couch on Mondays after AFL 360 returns with a new-look team again lead by Gerard Healy. Healy, Garry Lyon and Jonathan Brown will be joined by former Saint, Nick Riewoldt to dissect the weekend gone and the week ahead.

• Mike Sheahan returns for another season of Open Mike on Tuesday evenings with Bob Murphy back in July for his show, Bob. Murphy will join a famous sports fan in their own environment before passing back to Sheahan to close the season.

• In 2020, Saturday Stretch after Saturday Footy on Fox will round out the night for footy fans. Hosted by Dermott Brereton, Brad Johnson and Sarah Olle the fun trio will provide the best wrap of the biggest day in footy.

• Bounce host Jason Dunstall will aim to keep funsters Andrew Gaze, Cameron Mooney, Sharni Layton and Bernie Vince in check. It will be their return to television since the passing of their great friend Danny ‘Spud’ Frawley.

• Televised podcast show, The First Crack, will beat everyone else to the finish line Sunday after Bounce. The revolving panel of three will offer fans their first fix on all games and stories played out in the round that just was.