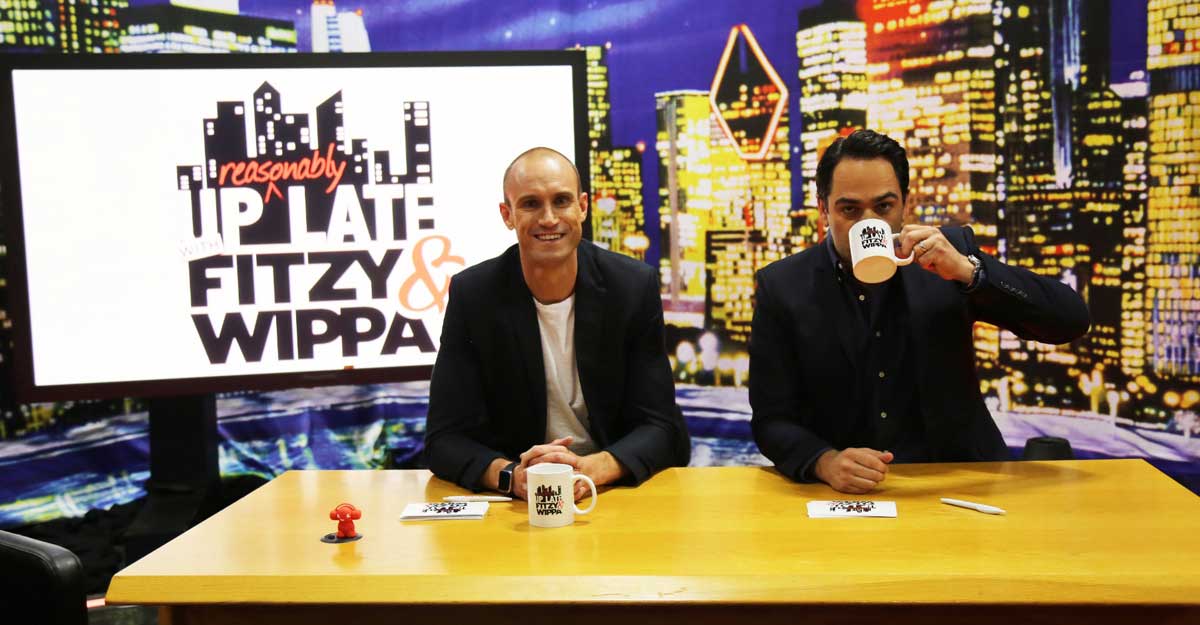 Hosts of Nova 96.9’s breakfast show Fitzy and Wippa will tonight host a special ‘one off’ late night talk show on TEN tonight at 11pm.

The Show has the breakfast radio hosts leaving the tracksuit pants in the radio studio and dressing up for a late night audience. Seated behind the desk, Fitzy and Wippa have a surprisingly high profile roster of guests for a low profile one-off late night show.

A pre-record that was close to live to tape, the show keeps a live, spontaneous vibe with a highlight being a chat between NRL player Sam Burgess and comedian Joel Creasey, who are interviewed on the couch together. Creasey, with a complete lack of knowledge and interest in sports is a great foil for a very game Burgess.

The radio duo are also joined by 2015 Eurovision entrant Guy Sebastian for a chat.

With years of experience under their belts doing casual interviews with guests on their radio show, Fitzy and Wippa take to the conversational style of the show with considerable ease.

Be sure stay awake for some shenanigans involving a pair of giant tennis rackets. Given the late hour, try not to confuse it for Wimbeldon.

UP REASONABLY LATE WITH FITZY & WIPPA

Nova 96.9’s Fitzy & Wippa will host a special ‘one off’ late night talk show on TEN tonight, Friday 27 November at 11pm. The show will also be available to view exclusively online at www.tenplay.com.au.

With an array of high profile guests, including Joel Creasey, Guy Sebastian and the first chat with Sam Burgess following his highly anticipated return to the NRL with the Rabbitohs, Up Reasonably Late with Fitzy & Wippa will be packed full of laughs, entertainment and a few surprises.

Wippa said, “We’re very excited. Any time after 7pm on a Friday is considered ‘up unreasonably late’ to my wife, but I assured her it’s a timeslot in demand – she’ll have to decide between watching us and Finding Bigfoot on Foxtel.”

Comedian Adam Hills provided his support for the show, adding, “Until you see someone really fail on television you don’t realise how much work goes into it, so I think purely because it will make the rest of us look good, you guys should definitely have a talk show.”

Following Wippa’s first foray into television with On the Couch with Wippa and inspired by some of the talk show greats, Wippa & Fitzy saw an opportunity to put together their own show. Ideas including The Nova Office and The Bachelor Pet were thrown out for a slicker show, featuring well-known guests and showcasing one of the busiest and most endearing radio breakfast teams.

Up Reasonably Late with Fitzy & Wippa will air on Friday 27 November at 11pm on TEN and will be available on tenplay, while Fitzy & Wippa can be heard weekdays from 6am on Nova 96.9 and from 6pm on the Nova Network.