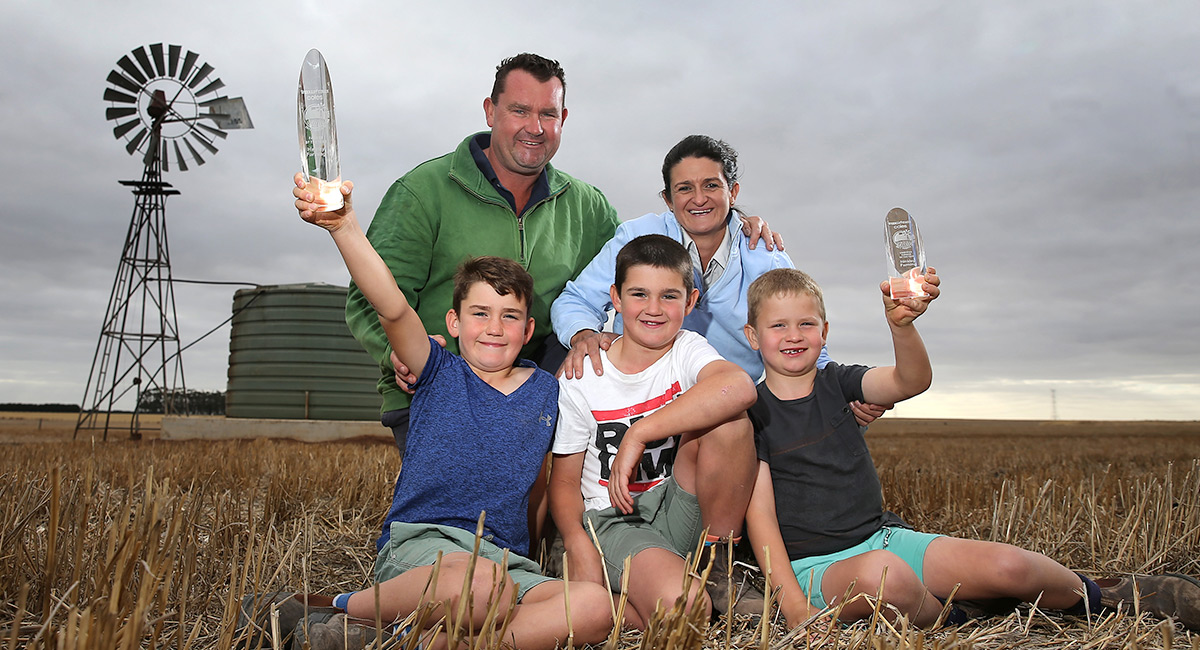 News Corp’s The Weekly Times and Coles have recognised the contribution of two Victorian farmers at their annual Farmer Of The Year awards.

Matthew and Rachel Hinkley from Derrinallum (pictured above) were awarded a $10,000 prize for their cropping farming. The former agronomists grew the size of their operation by 400% in just 13 years, plus boosted their return on assets by 10% and lifted crop yields to rival the best in the nation.

Since returning to the Western District in 2004 – where they have since grown their operation to 1,620 hectares of owned and leased land on which they grow wheat, canola and barley – the Hinkleys have invested heavily in farm machinery to improve efficiencies.

“We are very much driven by economics,” Matthew Hinkley said. “I believe there is as much done in here (in the farm office) as there is out there (in the paddock).”

The Weekly Times publisher, Ed Gannon, said: “This year Tasmanian Country and Rural Weekly have joined the News Corp Sunday titles to carry our Farmer of the Year magazine, giving the awards unprecedented exposure. And with The Ag Show, Australia’s only agribusiness television program televised weekly on Sky News Business, joining the News Corp Rural stable, we are now able to bring the awards to life on the screen.”

The finalists and the winning couple will all be profiled in the special Farmer of the Year magazine inserted in tomorrow’s Weekly Times (Feb 28) and the Sunday Herald Sun, The Sunday Telegraph, Sunday Mail (SA), The Sunday Times and The Sunday Mail (Qld) on Sunday March 4.

The Weekly Times editor Natalee Ward said: “The Weekly Times is proud to tell the stories of these farmers to our readers, to enrich connections between country and urban Australia. We want Australians everywhere to appreciate the effect farming has on all of our lives on a daily basis and to gain a better understanding that there is more to the business of farming than meets the eye.

“We’re proud to again celebrate the best farmers in the nation for the sixth year. Congratulations to all our winners and finalists, and again thank you to Coles, which is the major sponsor of this event.” The category winners were: