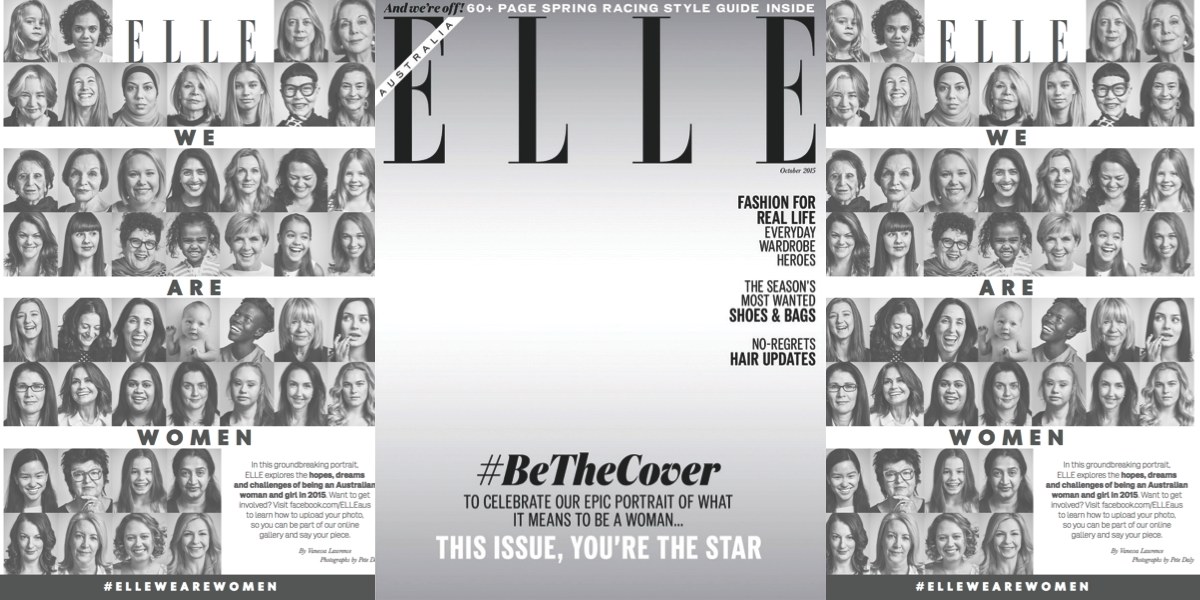 Mediaweek spoke to Elle Australia about #BeTheCover and the shiny cover on the stand this month.

With editor Justine Cullen on a whirlwind tour of New York, Paris and Milan for fashion weeks, Mediaweek spoke to Elle Australia’s deputy editor Damien Woolnough about the shiny thing on the stand this month. In an Australian-first, Bauer Media’s fashion title took a bold move with its October 2015 issue and produced a reflective surface as its cover with the coverline “#BeTheCover”.

The idea is to show the diversity of Australian women and the magazine’s readers, Woolnough said.

“The idea came about mainly because of the ‘We are Women’ feature, which is a photographic essay and is with women and girls ranging one month-100 year old.

“We were after something on the cover that would reflect the diversity of the people inside that feature.

“Lots of production aspects were taken into account [such as] the type of reflective surface we could have and how that would affect the advertisers as well.

“It wasn’t just for the sake of doing it otherwise it wouldn’t have worked. We wanted the authenticity and integrity behind the cover.”

The social media-friendly cover created a lot of buzz when it was first published, with Today’s Lisa Wilkinson, who also features in the “We are Women” feature, BuzzFeed Australia and a number of other outlets covering the topic. The readers weren’t too far behind to get in on the action by sharing pictures of themselves holding the magazine up to reflect their face in the space where a cover model would usually sit.

“We’ve had strong interest and social support, which is terrific. It has a great curiosity factor because it is something that’s quiet different from the models and celebrities that we are used to seeing on the cover.

Taking the cover and its social media reception as examples, Woolnough talked about the changes in publishing since he started as a copy boy at the Herald Sun just over two decades ago.

“We can take [our shoots and cover execution likes this] one step further by extending the galleries online. Then we have the aspect of Facebook, where people are able to upload their own photos and we’ve also got participation on Instagram – so I think that’s a way people can engage meaningfully with the brand.

Speaking on the year so far for the fashion title and what’s to come, Woolnough said: “We’ve had a terrific year. We are very pleased with the latest results, where our sales figures have held steady. And we’ve got a great period of growth ahead.”

Update: Since the above interview, Damien Woolnough has accepted the role of editor at L’Officiel