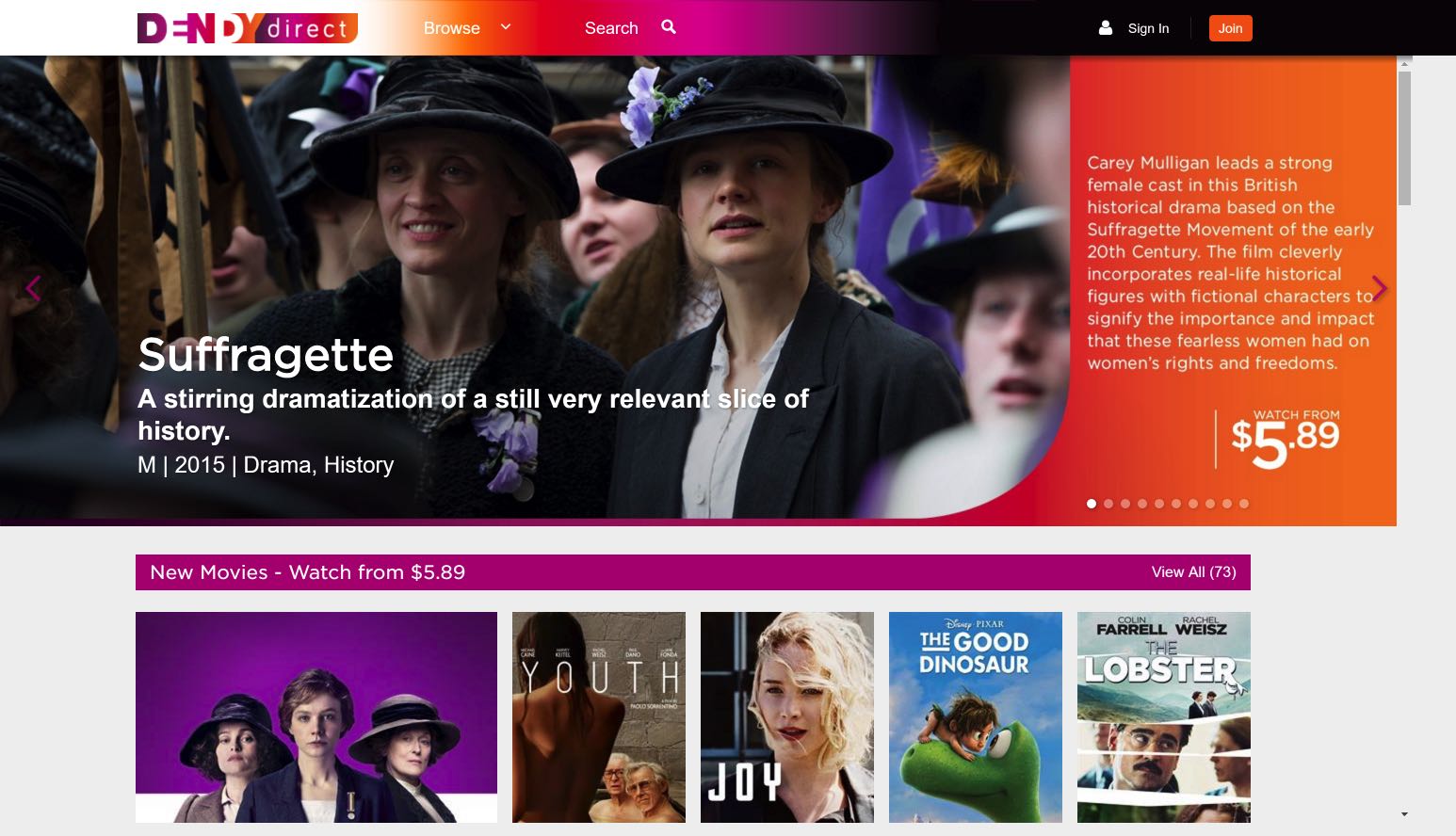 Dendy extends its customer relationship from the cinema screen to the lounge room with streaming service Dendy Direct.

The relative simplicity of Netflix’s business model has set in place incorrect expectations for many people of how a streaming video service can and should function. As the Netflix direct-to-consumer model has become almost synonymous with paid streaming video, its success has generated the false perception there is no space for competing business models or levels of scale. The team at Dendy believes there is room for competition, launching its Dendy Direct transactional video on demand service. Customers to the online store can buy or rent digital films and also buy TV shows. For Dendy, developing an online retail store wasn’t as simple as developing a “build it and hope they will come” product, but rather Dendy is seeking to create a mixed mode of branded consumption. Dendy wants to deliver quality art-house and specialty films to its audience, whether they want to watch a movie in the cinema or in the comfort of their own home. There is the expectation that Dendy customers can flow between the cinema and online with limited friction.

Dendy chief executive Greg Hughes is clear about his vision for how the online store aligns with the cinema chain: “We saw Dendy Direct as an extension of the retail business. It’s about how do you take this world [the cinema] and the consumer relationship you start building in this world and move them into a digital space.”

As a cinema, Dendy has been screening films since 1940 and has carved out a place within the Australian market as a beloved and respected brand. Online, however, represents additional challenges.

Putting SVOD services like Netflix aside, the online retail video industry is, itself, nearing saturation with much of the market overrun by large multinational online stores like Apple iTunes and the Google Play store taking the lion’s share of customers. It can be difficult for smaller stores to gain much traction.

Last year’s collapse of early-bird TVOD service Ezyflix is a prime example of how difficult it can be to compete in this space online. Quickflix, which operates a transactional retail video service in conjunction with an SVOD service, has also struggled, this past week entering administration.

Hughes is adamant that the strength of the Dendy brand and its business model can position Dendy Direct as a stable alternative to Apple and Google.

“Our business model is clearly very differentiated in the sense that iTunes doesn’t have cinemas. We’re the only player that has an integrated, branded cinema and digital offering. It’s rare. There are very few in the world. There are only two others we know of – Curzon in the UK and Cineplex in Canada. It’s rare in the world and unique to Australia. That’s our biggest competitor advantage and what we have to figure out is how to press that advantage as hard as we possibly can,” Hughes said.

Dendy Direct is built on the belief that there is a consumer that wants to deal with a local brand and shop local. In the same way that a cinema patron will choose to visit Dendy to see the latest Captain America film instead of visiting an Event Cinemas theatre, Dendy’s market research suggests that these same customers can be drawn upon to fuel the online business.

“Whether they’ve seen something in theatres or not, seen something on demand, we can start talking to them about what’s coming into theatres. So, we start to understand their behaviours and preferences and use that data to drive the business model into a virtual circle,” he said.

Both the cinemas and online store share a database, which allows the company to link the purchases of online customers to members of its cinema club. Already Dendy recognises that customers of its cinema and online store are similar.  The profile of the average Dendy cinema club member is a 48-year-old female, while customers of Dendy Direct skew female, with a slightly younger age of 44.

By linking the customers, direct mail and other marketing initiatives can work seamlessly together to drive the customer engagement with the exhibition and online stores. Within the cinema itself, patrons are exposed to Dendy Direct posters, flyers, and commercials before the movie.

Hughes understands that an online store is complementary to the exhibition business and has no concern that one may cannibalise the other: “The consumers that come here today to watch Captain America, Midnight Special, or Eye in The Sky, they’re going to consume content at home. Whether that’s movie content or TV content, they’re going to shop for that content anyway at home. They’re already transacting.”