McDonald is the Executive Producer of Common Sense & Gogglebox

With the success of Gogglebox in both the UK and Australia, when the UK creators of the format came up with a spinoff, it was a no-brainer that the customers of the format in Australia would want some of that too.

With Endemol Shine and executive producer David McDonald behind Gogglebox in Australia, the same team is back in action for Common Sense. 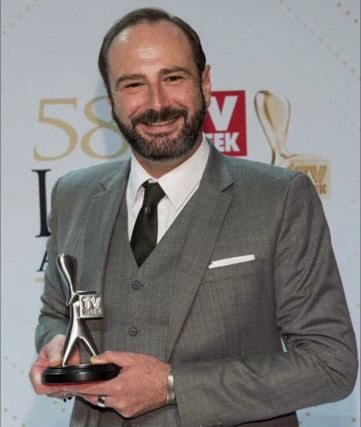 The show launched last week on Lifestyle and TEN, a model that has served both TV channels well.

Expectations are high for Common Sense after the success of Gogglebox in five series on each channel. Although McDonald said in a way the formats are “same same”, he noted significant differences.

“It is a companion piece to Gogglebox,” McDonald told Mediaweek. “The major changes are that instead of households we have workplaces, and instead of television the discussions are about news and current affairs.

“A workplace is where people often talk about breaking news stories and what might be on the political agenda.”

There are considerable expectations from the new format given the success of Gogglebox. “When Gogglebox first started, many people thought it sounded like the worst idea in the history of television. We sort of had nothing to lose going into that space. [Laughs] Now we are going into a space that Gogglebox already occupies so Common Sense will be compared to that.”

Prior to Gogglebox, McDonald got to spend some time with the format creators, although he hasn’t had that luxury with Common Sense. The creators of both are Studio Lambert in the UK.

He did however manage to catch the first season of Common Sense UK, which screened earlier this year on BBC2. While McDonald thought that was helpful, he emphasised that most of the preparation for this series centred around the people who will become the stars of Common Sense. “Casting is everything and that has really been our focus. Right from the beginning we have discussed who are the people who are going to be in this, people who the viewers will want to spend time with.”

Endemol Shine’s track record with the casting is pretty good. As McDonald noted, after five seasons of Gogglebox that cast remains largely the same. “Most of the search for the cast is done by street casting. We set out with a plan of where we think we might find the types of people and work environments that will make the show work, although sometimes that ends up quite different from what our original plan was.

“We considered thousands of people to see who was really going to deliver the warmth and the comedy, but they are also relaxed and can actually contribute opinions with points of view. It was quite a lengthy process to narrow the search down to 10 workplaces.”

McDonald didn’t think any one demo or workplace was easier to find than others. “The ages of the people we work with go from 22 to 91 and everyone in between to make sure we get a wide range of points of view. We have got plenty of age and experience plus youth and enthusiasm.”

Similarly he said no particular workplace stood out over the other, with McDonald noting most places were very receptive to the idea. “Some of the people own their own businesses while others are employees. We didn’t have any trouble explaining what the show was and what we were doing.”

Like Gogglebox, Common Sense by its nature needs to be a fast turnaround from when the cast is filmed. “It needs to be done within six or seven days. It needs to be a tight schedule to keep it current. Some topics do hang around for a while though while others disappear pretty quickly.”

No subjects will be out of bounds on the new series, even politics, which is sometimes seen as a turn-off for audiences looking for entertainment. “It is important that politics will be part of the mix. It will depend on how we do it. If we are funny and irreverent about it audiences should find it engaging. There will be a mix of all sorts of stories – it will certainly not be simply a news and current affairs show.

“Much like Gogglebox, the thing that attracts the audience every week is the characters – the minutiae of their lives and what is going on in their world.”

The footage is shot the same as it is for Gogglebox with filming by remote cameras with no crew in the room with the cast. “We want an unfiltered range of opinions. We then have to edit to make sure it all makes sense, is funny and in the correct sequence.”

As happens for many shows, the Common Sense producers will end up with mountains of content every week that is turned into the 48-minute programs that go to air.

Endemol Shine has a producer on site at each location, but they are set up in a control room elsewhere on site, not in the room with the cast. Although it is too early to tell if Common Sense will become a regular series, it would seem to make sense that the new format and Gogglebox will alternate across the year with two 10-episode series of each.

McDonald noted the push by some people, Mediaweek included, to have the Gogglebox format on every week of survey. Having these two formats alternating seems to make more sense.

“Having Gogglebox on all the time is a big ask on the cast and I’m not sure that could ever happen. Once the cast are working on a new season it can be relentless. By the time the episode goes to air you have to start filming the new one.”

As to the JV between Foxtel and Network Ten, McDonald called it a successful union. “It seems to have worked well for both networks. If there are future commissions using this model I wouldn’t be surprised.”

McDonald’s Endemol Shine colleague Margie Bashfield recently expressed her belief in these pages that Ten would sort out its current challenges and continue to broadcast as one of three FTA TV channels. McDonald also noted this was not the first time things like this had happened. Seven, Nine and Ten have all stared down the barrel in the past. “There is definitely a future for TEN as a third broadcaster.”

He didn’t have any ideas about how they could achieve that though. “I just make the shows,” he laughed. “I just try to get this bit right.”

When he was first featured in the pages of Mediaweek, David McDonald was the partner in a small Sydney-based independent TV production company called McDonald Eastway with business partner John Eastway. Eastway was a former producer on The Norman Gunston Show, a program that featured Garry McDonald, David’s father.

The key program on McDonald Eastway’s slate around 15 years ago was three series of Life Support for SBS.

Since then McDonald worked as a producer and writer on two seasons of Comedy Inc for Carl and Mark Fennessy’s Crackerjack Productions. He later worked under the Fennessys during their time running FremantleMedia on Double Take and then later MasterChef.

He was given the keys to Gogglebox when it launched in 2015 and is now in pre-production on the sixth series of that format in addition to steering the first season of Common Sense.

His current productions are a hybrid of the comedy shows McDonald cut his teeth on and the reality formats he worked on later on during his career.