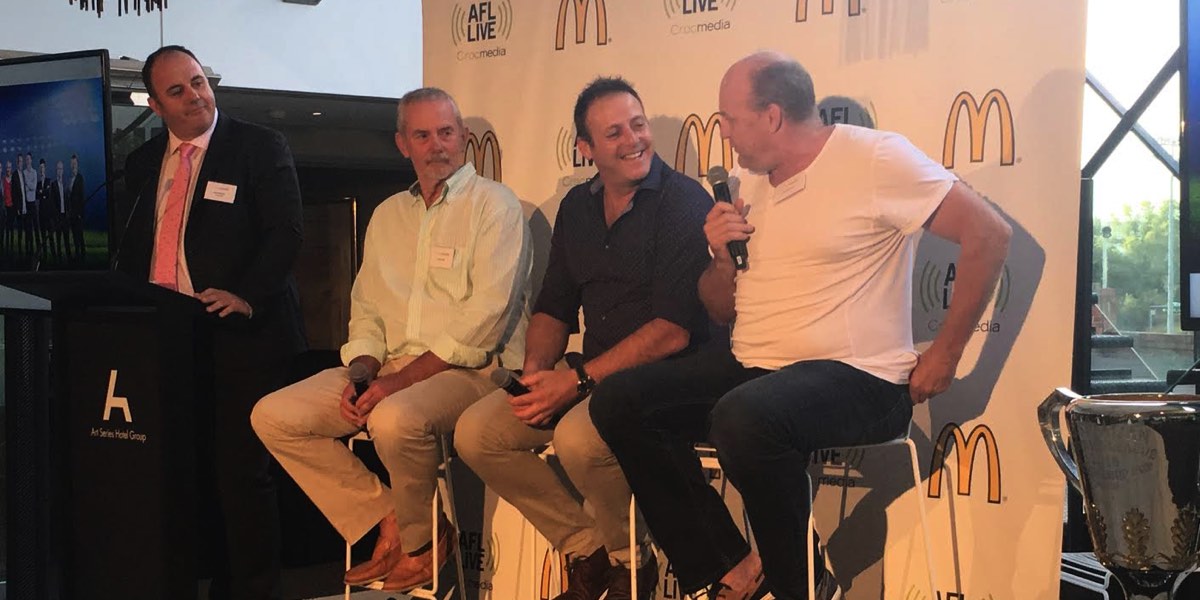 • Up to six matches across the 23-round home and away season, plus every final live

Australia’s most widely distributed AFL radio call is back for another season, with Crocmedia unveiling its star-studded commentary lineup for season 2016.

Sponsored by McDonald’s – the official restaurant of the AFL – Crocmedia’s AFL Live call will be broadcasting up to six matches across the 23-round home and away season, plus every final live.

And once again in 2016, AFL Live welcomes back to the microphone broadcasting royalty Robert Walls and Drew Morphett, who are back doing what they love – calling Australia’s biggest sport.

AFL Live is also delighted to welcome Ros Lanigan to the commentary team – working alongside Roberts, Tristan Foenander and Brownless on Friday nights.

A dedicated program, AFL Today, will be beamed live from the ground across regional New South Wales and Queensland from 11am as AFL Live continues to partner with the AFL to expand the reach of the competition.

Crocmedia executive director Chris Giannopoulos said the 2016 version of AFL Live would be bigger than ever. “We’re thrilled to be taking Australia’s biggest sporting code to so many parts of regional Australia,” Giannopoulos said. “Our team will deliver at least six matches every week of the home and away season, plus every final of the Toyota AFL Premiership Season.

“To have names like Donegan, Hunt, Roberts, Walls, Morphett and Brownless back as part of the team again is a great coup for our audience.”

Some of Australia’s biggest brands will again partner with the broadcast to personalise their messaging to regional Australia.

“The 2016 season looks like being our biggest yet, and our broadcast offers a chance for brands to tell their story directly to regional areas,” Bingley said.

“Regional Australia represents almost 40% of the population, and we know that our football broadcast can allow advertisers to speak to that market in one hit.”

Donegan will anchor the broadcast on Saturday and Sunday afternoons and said it was great to be back.

“Sitting alongside Rex Hunt every Saturday afternoon is one of the most exciting things you can do as a sports broadcaster, so to be able to do that again this year is a huge thrill,” he said.

“I’m a regional boy, and I love the regional audience we speak to every weekend.”