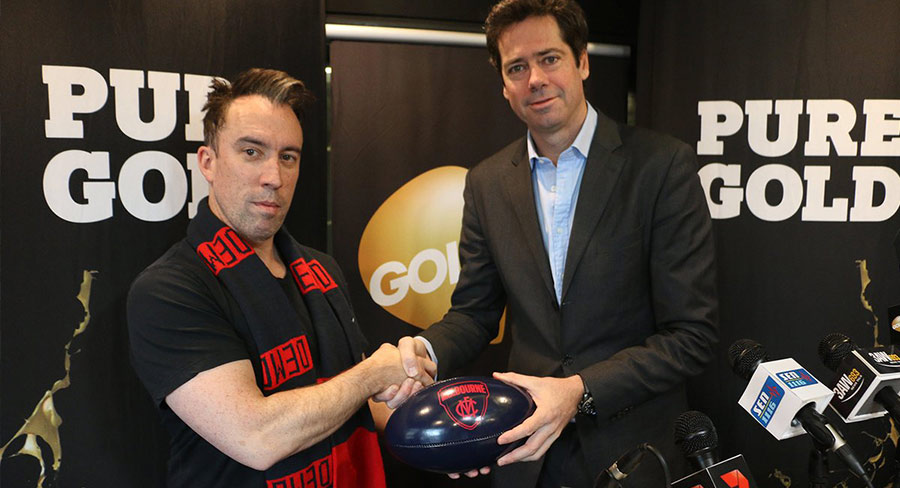 O’Connell has listened to pitches from players and fans from 10 AFL clubs.

It was day 13 of the new Gold 104.3 Christian O’Connell breakfast show. For 10 of those 13 days Melbourne’s newest radio host has mulled over which AFL team he should be choosing. With help from broadcaster Hamish McLachlan, O’Connell has listened to pitches from players and fans from 10 AFL clubs.

Today was the day O’Connell was finally ready to reveal who he had gone for. He revealed recently that his wife had chosen Geelong as his wife’s best friend lives there. Co-host Jack meanwhile had managed to win over Christian’s daughter to support Essendon.

“This has been one of the most nerve-wracking things I have ever been involved in in radio,” O’Connell said this morning.

To make the announcement, Hamish had secured the services of his brother and AFL CEO Gil who visited the studio.

After giving away the decision shortly before the official announcement, Gil officially revealed O’Connell had chosen the Melbourne Football Club. “It’s a great choice,” Melbourne coach Simon Goodwin said in a phone call shortly after the announcement. Goodwin made the pitch to O’Connell for the club and later followed up with a signed football.

O’Connell also spoke to Melbourne captain Jack Viney on-air as he welcomed the broadcaster to his new club.

O’Connell also revealed this morning that St Kilda was the team that was his second choice. Those decisions are a brutal blow to Collingwood, which had hoped to lure O’Connell to the Pies.

O’Connell had a three-hour lunch with Pies president Eddie McGuire earlier this week, who pitched the benefits of supporting his club.

The decision to go with the Demons is a win for O’Connell’s friend Hamish Blake, but Andy Lee is not happy. The Carlton supporter helped O’Connell with his visa application and he said this morning he was thinking of asking the government to revoke O’Connell’s entry permit.