When Nova 96.9 launched on April 1 20 years ago, there was an aspiring radio announcer at AFTRS called Tim Blackwell (above left with Kate Ritchie and Joel Creasey) looking for his break in the industry. Little did he know that before the year was out he would be working at Australia’s newest FM brand and would go on to be the launch announcer on another its new FM stations.

On his way to AFTRS every morning Tim Blackwell would pick up his colleague who has also done very well since graduating, Triple M Sydney breakfast presenter Chris Page, and they would strategise about how to get a gig in radio as the red Toyota Starlet weaved through the traffic.

“The funny thing is we were obsessed with listening to the new Merrick and Rosso Nova show, partly because they were playing pretty crazy music we’d never heard on commercial radio before,” Blackwell told Mediaweek. “It was the best time to be studying because Nova had everyone in Sydney talking about radio.”

In 2000 Tim Blackwell was sending out demo tapes to anybody he thought might be hiring – including Nova’s new content executives Dean Buchanan and Dan Bradley.

“I got a handwritten letter back from Dan Bradley offering me a chance to be part of a DMG station that hadn’t yet been announced as another Nova station. The starting salary was $36,000 and I jumped at it as it was $36,000 more than I had ever earned in a year before.”

Between accepting the job and moving to Melbourne, DMG sent Blackwell to Albury to get some commercial radio experience at the Star FM hub, one of DMG Radio’s regional business centres. “I ended up hosting drive from 2pm until 7pm to about nine different regional markets. We had about 10 talk breaks an hour and seven of them had to be local. I’m not good at math, but it was a lot of breaks to navigate. To this day I have never worked harder than during those months in Albury.”

When Nova 100 Melbourne went to air late in 2000, Blackwell hosted midnight to 6am, along the way forming a friendship with Dave Hughes and Kate Langbroek who turned up at the station at 5am each day to prepare for breakfast.

“I would hang around for the first hour of their show to watch them work. I later got moved into a late evening slot, 10pm until 1am.

“Looking back I was just so lucky to be part of the launch of a brand and a station like that.”

From Melbourne, Blackwell was moved to Perth where he was the launch announcer when Nova 937 went to air in December 2002.

“To make it even more nerve wracking for me, I was sharing the studios with the Red Hot Chili Peppers, Dean Buchanan, crews from every TV news network. Also with us was Lord Rothermere, the UK proprietor of DMG, at the only Australian launch he attended. He stood behind me and I was absolutely pooing myself.” Adelaide is the only market where Tim Blackwell hasn’t lived in for Nova. He’s heard there on drive daily though.

After Perth, this Nova announcer went to Sydney, back to Melbourne, then to Brisbane, back to Melbourne and is again in Sydney where he is part of the talented drive team Kate, Tim and Joel, Australia’s #1 drive show.

As to how DJs warmed to the original “never more than two ads in a row” plan, Blackwell said. “Announcers had to make sure they didn’t need a toilet stop, as there was never a break longer than one song. Because for every ad and every promo spot we were playing live manually. The listeners absolutely loved the low ad load. A 60 second ad break is easy to deal with and then the listeners didn’t know what we were going to play next. It was a crazy playlist.

“All the markets had very different music too. When new music arrived the PDs would run the corridor and give you the CD that had just arrived from the record company.”

Blackwell can’t remember any run-ins with the PDs during the launch years. “Except that some PDs wanted a caller in every break. And that had never made any sense to me. “Otherwise the instruction was a simple, ‘Keep it light, keep it bright.’ Something that many music jocks still get today.”

Nova sounds different now to what is was two decades ago, but Blackwell said so it should. “Radio has always moved with the times. We are exactly where we need to be for the people who are consuming our product. When the iPod was first released we thought people with 10,000 songs in their pocket with no ads would be the end of radio. But it continues to thrive.” 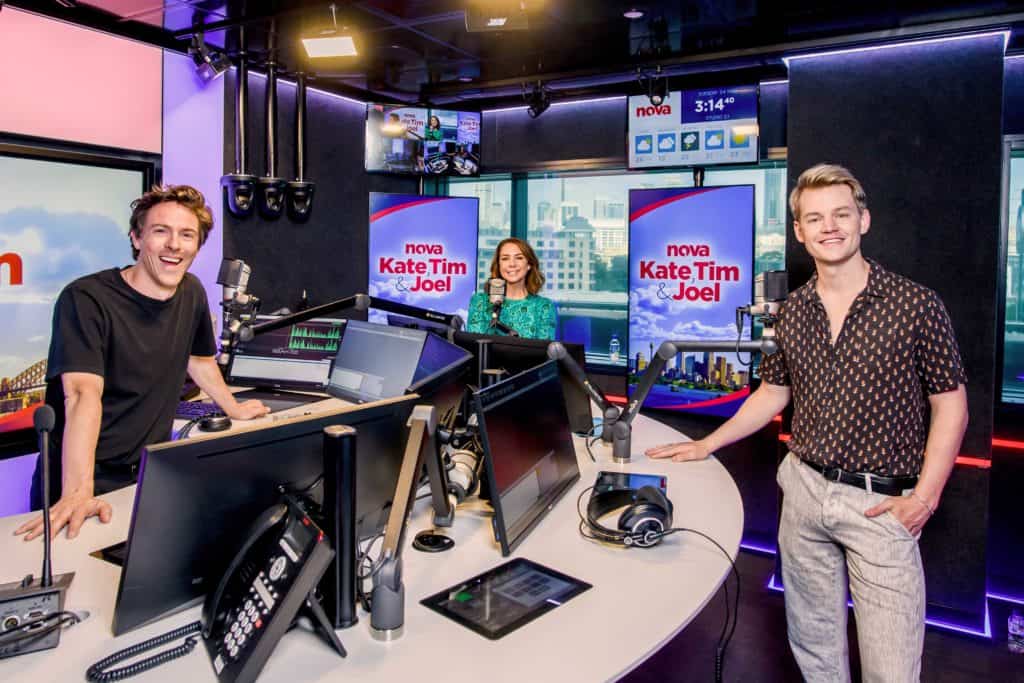 Tim Blackwell [left] in the studio with Kate and Joel

There is more focus on things between the songs today in radio, said Blackwell. “Something your competitor doesn’t have is your show and the show’s slant on something. It is a great time to be an announcer in breakfast, drive or the evening because you are just as important as the songs.

“The rise of podcasting has indicated that people are not allergic to hearing people talk on the radio.”

Over the 20 years at Nova Blackwell has never had a reason to think about leaving, noting that every job change within the network had advanced his career. He left Melbourne breakfast radio with Hughesy and Kate to co-host in Brisbane with Meshel Laurie. That led to drive where the successful Kate, Tim and Marty show has morphed into Kate, Tim and Joel.