Thursday April 1 will mark the 20th anniversary of the launch of what was the then DMG Radio [now Nova Entertainment] owned new metro FM station Nova 96.9. The licence for the Sydney station had been purchased 11 months earlier for $150m by a bidder acting on behalf of DMG founding CEO Paul Thompson.

The brand was established to be a radio disruptor and it certainly did that with strong ratings soon after launch for the Sydney station and other Nova stations subsequently around Australia.

Two stations launched in 2001 with others following over the next few years.

To celebrate the radio milestone, Mediaweek has spoken to a number of key people involved in the launch of the brand around Australia. We start today with the founding CEO of DMG Radio, Paul Thompson. Following the introduction of FM radio in Australia, Thompson built two national FM networks. First Austereo and then later Nova. 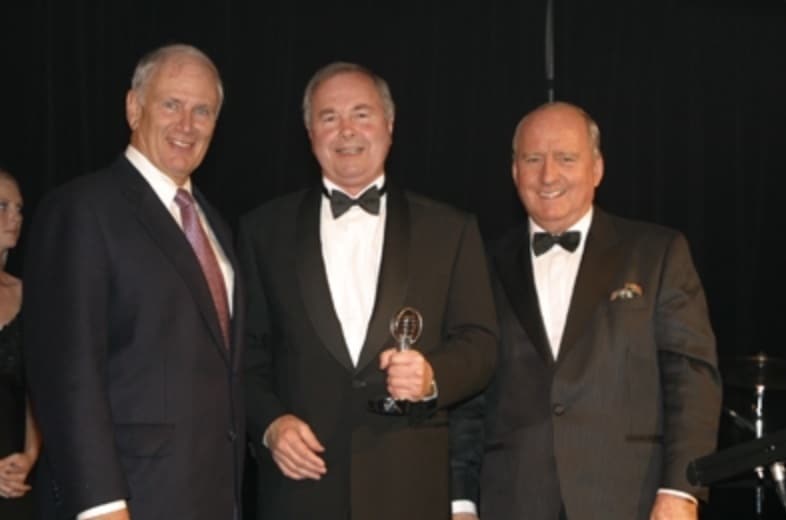 Paul Thompson inducted into Radio Hall of Fame in 2002. With then Communications Minister Richard Alston (left) and 2GB’s Alan Jones

Paul Thompson: The irony of it all was that what is now the Nova group, grew out of events that happened at Austereo who were very bitter rivals. The trigger was the change of ownership at Austereo in the mid-1990s. Before that I was happy to stay at Austereo, perhaps for the rest of my career. It soon became apparent it would be better for everybody if I didn’t stay.

I left Austereo and almost immediately was contacted by DMG in the UK [Daily Mail Group] who asked me to put together a radio group for them.

That was almost impossible in the short term because there were no licences. There was nothing to buy because I had already bought them all as part of the Austereo network. I then started the process of lobbying the government to make more licences available.

If there hadn’t been a change of ownership at Austereo and if I hadn’t started lobbying the government, there wouldn’t have been any new licences.

The entire radio industry, and the wider media industry were lobbying quite hard against any new licences – and I entirely understand that because it meant the revenue pie was going to be shared between more players. There probably would have eventually been more licences issued, but it may have taken many more years to happen.

I ran into a brick wall for quite a long time. Because of the lobbying by those opposed to new licences – and they had a lot more pull than I had – most of the ministers at the time were on the side of the industry. I understand that because they had significant influence and I had none. The lobbying went on for several years and was very hard work.

There was a regional radio inquiry held that involved what was then DMG Radio as we controlled a number of regional radio licences. It was really an inquiry into DMG and we uncovered what became known as the bogus letters case where people wrote letters to the government alleging things that DMG Radio had done. All of it was later to be revealed as false as part of a totally bogus campaign. It held things up for quite a long time. After our reputations were eventually cleared the government made the licences available.

The first domino to fall was Sydney in May 2000 and in due course we were successful with all of the licences in every capital city. Sydney licence cost us close to $150m which was very expensive. The station subsequently went to air in April 2001.

I did attend and bid in Sydney. [Thompson didn’t attend the auction in his home state, instead having someone bid on DMG’s behalf while Thompson waited anxiously nearby.]

Because we had some very serious competitors with very deep pockets, we had a plan. We knew our opponents really wanted to stop me in particular from getting the licence, so I bid to a particular level. When someone went past that level, I threw my hands in the air, looked despondent, indicating we were done.

But we had a wholly-owned subsidiary represented by a lawyer who continued to bid. The competition vanished and our subsidiary managed to pick up the licence.

[The licences for the Nova stations in Brisbane and Perth were bought by Nova Entertainment and ARN under a joint venture agreement.]

If we had gone hard against each other the cost would have been very high for whoever won. It was sensible to form a partnership rather than to batter each other over the head. We also both competed against Austereo, although by then we were less focussed on Austereo. At the beginning it was certainly a driver because they had the audience we needed to get. We deliberately chose April 1 to launch as we had wanted the Sydney station and the network to be a disruptor. I felt we couldn’t be successful by trotting out more of the same. Nothing said disruptor better than launching on April Fool’s Day.

We had paid a lot of money for the licence and we needed to impact the market quickly.

Our launch strategy was based around new music, and an irreverent presentation style where we didn’t take ourselves too seriously. We decided to carry a low number of ads for which we charged a premium – never more than two ads in a row.

That was very effective as a disruptor, but in the longer term probably cost us some revenue, but in the short to medium term it was extremely effective.

We should probably have changed it a little sooner than we did. It was very hard for agencies or anybody booking ads on behalf of clients to explain why they were paying more. Most people needed to demonstrate they were buying advertising cheaper than other people could. Our approach flew in the face of that and made things awkward for buyers.

The name Nova was amongst a list of possible choices the then small team had brainstormed. I looked Nova up and saw that it meant ‘new star’. It also meant ‘new start with a short life’, and I was hoping no one would pick up on that.

A number of the core team from 20 years ago aren’t in radio now. Keith Thomas [then DMG group sales director] was with me early. For the last decade he has been CEO of Port Adelaide. Another key player back then was Kingsley Hall who was group finance director who is now CFO of Micro X.

Some of the team had worked with me at Austereo, Keith had, and Kingsley had been an auditor for Austereo. Steve Adler was with me on the journey too from the beginning of DMG Radio and he was with me prior to that at Austereo. I also brought across Eriks Celmins and Dan Bradley from Austereo. Cath O’Connor joined a few years later.

The Austereo people were very good, including the ones who stayed with Austereo. Brad March was there as a top programmer and later managing director and Jeff Allis was still there. They were advised by Greg Smith and he was very good too as was Michael Anderson, who worked in sales and was later a CEO.

The initial head of content was going to be Jeff Allis from Austereo. We had talked about him joining for many months. At the same time his wife Janine Allis had what became a fly in the ointment – a concept to create a retail business called Boost Juice. In the end Jeff stayed at Austereo for a short time as he and Janine focussed on their new business. You could not say anything other than it was an enormously good decision on their part. We soon brought in Dean Buchanan who joined the launch team.

Merrick and Rosso arrived from triple j and they were very good. They had someone working with them on some humorous current affairs – his name was Paul Murray who has gone onto big things at Sky News.

At the beginning Austereo was almost contemptuous of what we did. Because we challenged every precept in radio they didn’t regard what we had done highly at all. That position changed as time went by. I was told by some of their executives they thought we had messed up the launch.

I started with DMG Radio in the late 90s and then retired on June 30, 2010. I suffered a mild stroke in 2006 and it was a bad time because it was when we were launching Vega. I realised it was time to start planning the exit. By that time I had brought across Cath O’Connor and she was the likely successor. I gave DMG a year’s notice and somewhere during that 12 months DMG spoke with Lachlan Murdoch and he acquired a shareholding. I stayed a little longer as an advisor to Lachlan and Cath was appointed as the new CEO.

I had worked for maybe 70 hours a week for close to 40 consecutive years. I was actually ready. I consulted for a little while after retiring, but I didn’t enjoy consulting like some people do because you don’t have the power to implement what you are recommending.

That was the first time I found myself in the position of recommending something, but not being able to follow through and implementing it.

Because I had worked such long hours and travelled at least 45 weeks a year. I found that very demanding and talking about work/life balance, I had none. I had four kids and I was often not around.

I stopped working entirely and never had a moment’s regret. People ask ‘How can you just stop?’ I found it really easy. No problems whatsoever and I never contemplated working somewhere else.

Don’t ask Paul Thompson about state of the industry

I have been scrupulously careful not to offer any comment as to what people should do. There is nothing worse than that. I remember when I started there were lots of older radio people offering advice. I thought I would never be like that.

Success had only one blemish

The Nova story is about as close to a total success as it could be. It was right for the generation of management under Cath O’Connor to focus on higher advertising content to maximise revenue. Nova was a disruptor, but is no longer a disruptor and probably no longer needs to be. Nova now is what it should be for the times.

The only negative for me in the company that was DMG was the launch of Vega which wasn’t successful. Of course smooth FM is now extremely successful about which I am absolutely delighted. And I also very happy Nova has gone on to greater heights.