The latest election ad spend by political as monitored by Nielsen helps explain why many marketers are keeping away from media until after the 2019 Federal Election campaign ends, thankfully in just two days.

Clive Palmer’s United Australia Party is making big waves with the size of his spend. While that is good news for some, including the media getting the lion’s share of the investment, it is drawing negative comments from many and making many brands wary of a noisy marketplace.

Australia’s media agency market continues to be hobbled by lower business confidence ahead of the Federal election, reporting its sixth consecutive month of lower demand in March with total bookings back 4.7% on an underlying basis to $583.6 million from last year’s record high.

SMI AU/NZ managing director Jane Ractliffe said it was now unlikely the market will start to pick up until well after the Federal election.

“We already know this year’s April data has been negatively impacted by the extended Easter and ANZAC Day break in April this year compared to the smaller timing impact in April last year when Easter started at the end of March,” she said.

“The downturn in media investment is not going to start to pick up until after the election when hopefully the new Government will be able to restore business confidence and therefore inspire businesses to start reinvesting in advertising.

“The good news for major media is that SMI has always seen large upticks in advertising expenditure following periods of lower growth…the only question is when that growth will start to kick in.”

SMI’s Jane Ractliffe will be talking to Mediaweek on Your Money today at 2.30pm.

Nielsen said that in the last week alone, United Australia Party spent $5.3m, more than what the Liberal and Labor party combined tipped into media.

Since September, UAP has spent $44.4m with messages for Australian voters. That is more than double the combined spend of Liberal and Labor ($11.5m each). 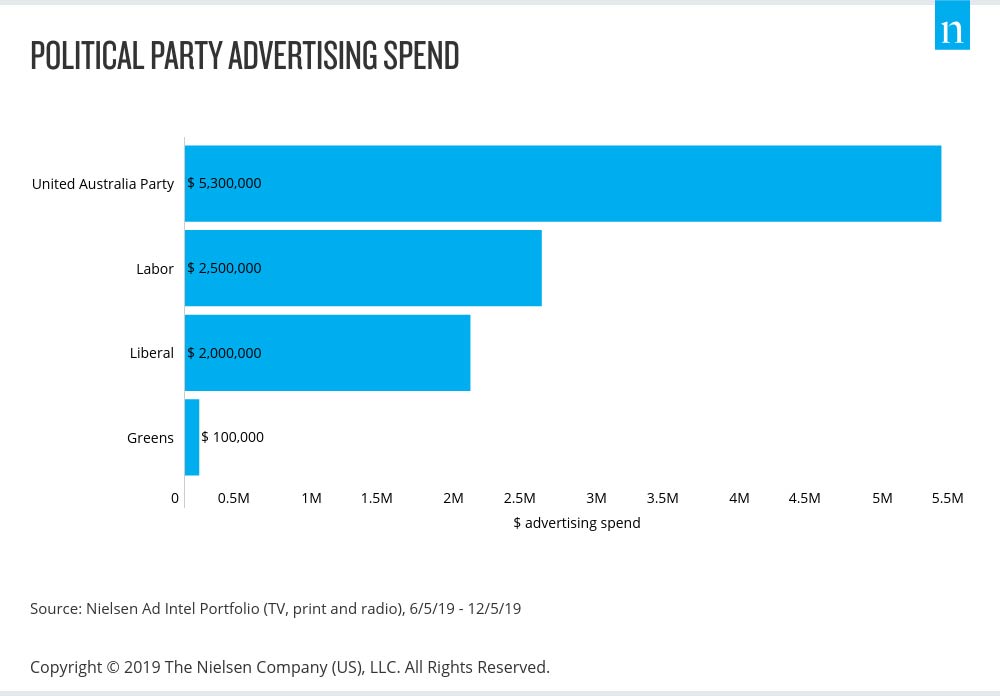