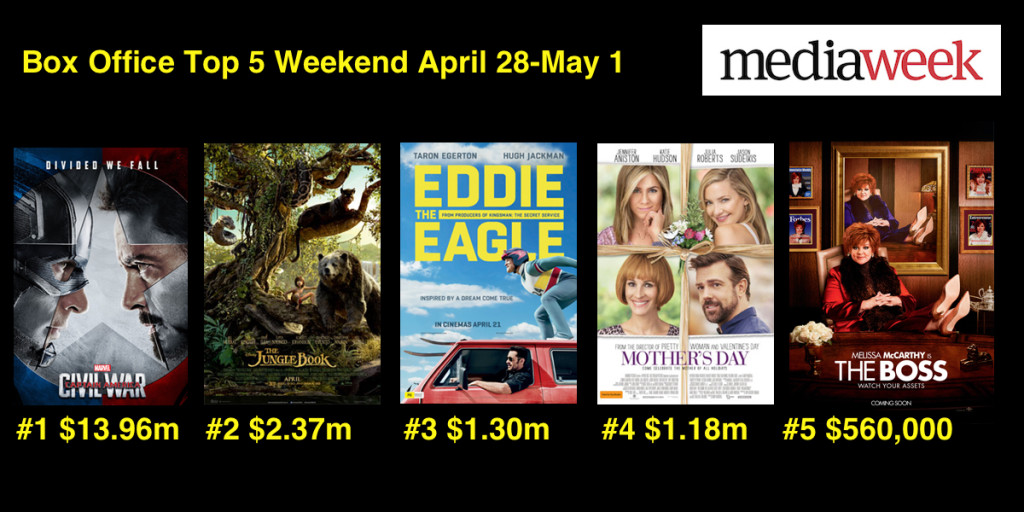 Total weekend earnings of the top 20 movies have pushed above $20m for just the third time since January.

#1 Driving the dollars on the last weekend on April and the start of May was Captain America: Civil War which is yet another Marvel franchise rolling in cash. The movie posted the second-best opening of 2016, trailing only another Marvel superhero movie, Deadpool, which opened with $14.94m. The new Captain America managed to double the opening weekend of its predecessor Captain America: Winter Soldier.This is the 10th Marvel movie to open at #1.

The movie just falls short of making the top 10 opening weekends of all time. To crack that list it would have needed $14.5m to pass The Hobbit: The Desolation of Smaug.

Captain America: Civil War has posted the third-best screen average of the year with $20,715 for its 674 screens. The best averages so far in 2016 for movies in wide release belong to Batman V Superman: Dawn of Justice with $22,150 and Deadpool with $37,736.

#2 Jungle Book has pushed its total take to $25m with an extra $2.37m over the weekend. The movie remains on 371 screens in its third weekend with a screen average just under $6,400.