The top five movies accounted for close to 70% of the box office for the top 20 across the four-day weekend ending Sunday August 13. Two new releases made the top five with one over $2.2m and the other over $1.2m. However the weekend haul was the lowest weekend total since December 2016. Takings were down 6% on the previous weekend which delivered $11.06m. Since a bumper $21m weekend in early July, the numbers have slid each weekend in the five weekends since. 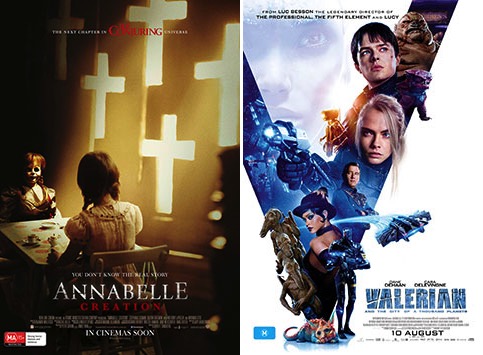 Horror releases have been performing well and this US supernatural scarefest directed by David F. Sandberg and written by Gary Dauberman has topped the chart. Warner Bros opened the movie on 231 screens with an impressive $9,903 per screen. The movie is a prequel to Annabelle from 2014 and is the fourth instalment in The Conjuring series which launched in 2013.

After four weekends the movie is still holding down a top two spot with a total earn to-date of $19m. It is holding on 337 screens with a weekend screen average of $5,129.

Good to see the prolific director Luc Besson back in the top five with this English language French 3D science fiction action adventure. American jazz keyboardist Herbie Hancock plays the defence minister while Aussie Elizabeth Debicki is the voice of Emporer Haban Limaï. The movie opened on 433 screens with what is a disappointing $2,908 per screen.

After three weekends the film remains on 315 screens for a weekend screen average of $3,352 and a total gross to-date of $8.86m.