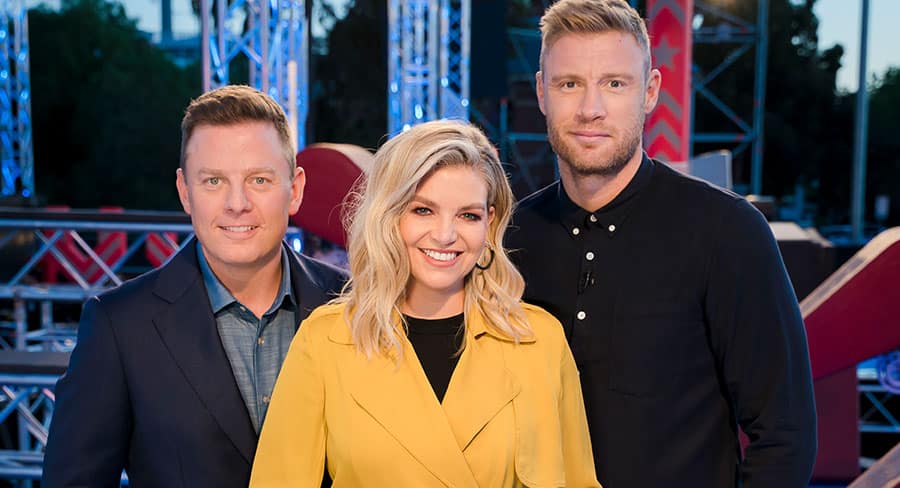 Nine’s Australian Ninja Warrior was the runaway hit of the 2017 TV year. When it backed up for season two in 2018, not so much. The numbers were still good, but not a patch on what it pulled on debut.

Can Nine find the ratings magic that electrified audiences the first time around? Ninja Warrior co-host Ben Fordham thinks so.

“We’d like to see the ratings back to where we were in the first year. They were such record-breaking numbers that I might be a bit ambitious. But you’ve always got to shoot for the stars. We want as many families as possible sitting down around Australia watching it together.”

Nine and Endemol Shine Australia moved production to Melbourne this year, partly because they found a great site with city backdrops, and because Melbourne people tune in big time for shows filmed on their home soil. It works for The Block.

Ben Fordham co-hosts Australian Ninja Warrior with Rebecca Maddern. They are joined by Freddie Flintoff who has been getting good reviews for his new UK TV job – co-hosting BBC’s Top Gear. “Melbourne welcomed Ninja in a major way and the crowds certainly proved they deserve their reputation as the sports-loving capital of Australia. It didn’t matter that it was sometimes 1am and minus three degrees, they still got right into it. Melbourne loves big events and they love TV being filmed in their city.

“The big change this year is the fact there will be a winner who will receive a rather large cheque from [Nine CEO] Hugh Marks.” Make it up Mt Midoriyama and the winner will pocket $200,000 and the title of Australia’s first Ninja Warrior.

“The other major change is the jeopardy element with the warped wall, which is an iconic Ninja element. This year there are two warped walls.”

If a competitor decides to tackle the tougher of the two warped walls, there is a $5,000 cash bonus waiting at the top.

The two hosts need to improvise as the viewers see contestant after contestant attempting the same challenges. With no writer for the hosts, Fordham and his colleague Maddern do their own research. “We get to know who the Ninjas are and we study their backstories. We look for anything interesting about them. What we have done this year more than ever before is get to know every square inch of the course. It gives us more authority about when and why people become unstuck.”

The 2019 shoot lasted two weeks, with Fordham noting they were lucky regarding weather, apart from cold late night shoots!

“We had extra industrial strength heaters installed in the commentary box to combat the chilly breeze coming off the water.”

The new course is in Spotswood, beside Scienceworks, near where the Yarra River meets Port Phillip Bay.

Noting that he is wary of overpromising and under delivering, Fordham was still moved to say: “It is the greatest TV show you will ever see in your life. We had a lot of fun doing it.”

Calling the action on Ninja Warrior is not unlike working on a sports broadcast. As to sports commentators that Fordham was influenced by, he said: “I grew up always listening to Ray Warren, Dennis Cometti, the late, great Darryl Eastlake and Ray Hadley.”

Fordham remembered how he once got a call from Julie Eastlake, Darryl Eastlake’s wife, when Ninja first started. “She told me, ‘When I hear you commentate I hear the same enthusiasm that big Dazza used to bring to his coverage.’ It give me a big thrill to hear that.”