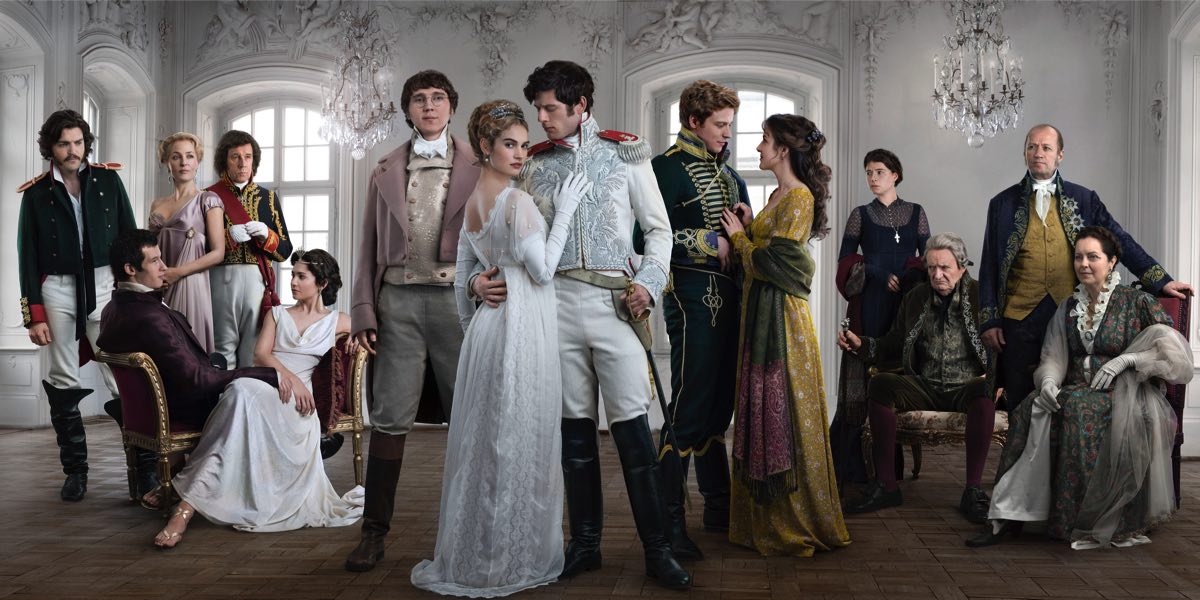 BBC First has unveiled details of some of the big titles and stellar stars who will be hitting the channel in 2016. Paul Dano, Lily James, Idris Elba, Tom Hiddleston, Elizabeth Debicki, Hugh Laurie, Rowan Atkinson, Cillian Murphy, Tom Hardy and Sean Bean are some of the big names who will be heading up the list of premiere drama content from the UK.

Leading the lineup is Andrew Davies’ landmark adaptation of Tolstoy’s War and Peace. Starring Paul Dano (Love and Mercy), Lily James (Cinderella, Downtown Abbey) and James Norton (Happy Valley), the series is a bold, refreshing and modern take on a thrilling, funny and heartbreaking story of love, war and family life. The ambitious six-part series brings the book to life on a truly epic scale and has been filmed on location in Russia, Latvia and Lithuania with a cast that also includes Jim Broadbent, Gillian Anderson, Greta Scacchi, Stephen Rea, Ken Stott and Ade Edmondson.

Golden Globe-winning actor Idris Elba returns as brilliant but troubled detective Luther. The feature-length event in February sees him face his toughest test yet – one that will push him closer to the edge than he’s ever been before. When Luther discovers the one person he still loves might be dead, he has one aim – find whoever’s responsible and make them pay. Meanwhile, a savagely intelligent killer is leaving a trail of bodies but no trace of his identity. Luther realises he must return to the job – only he can immerse himself in the killer’s complex psychosis and anticipate his next move.

Based on the novel by John Le Carré, The Night Manager starring Tom Hiddleston (Thor: The Avengers) Hugh Laurie (House) and Elizabeth Debicki (The Great Gatsby) brings together love, loss and revenge in a complex story of modern criminality. The six-part series follows Jonathan Pine, former British soldier and now night manager of a European hotel, who is recruited by intelligence agents to infiltrate the inner circle of a lethal arms dealer. As he navigates the shadowy recesses of Whitehall and Washington, where an unholy alliance operates between the intelligence community and the secret arms trade, Pine must himself become a criminal.

Rowan Atkinson (Mr Bean) will play the legendary French detective Maigret in two stand-alone films based on the novels by Belgian author Georges Simenon and Cillian Murphy (Inception) and Tom Hardy (Mad Max: Fury Road) will return in a third series of the acclaimed gangster drama Peaky Blinders. In this series Tommy Shelby is pulled into the glamorous and dangerous world of international intrigue in 1920s Britain, putting his entire organisation and family at risk, and forcing him to question everything about his own ambitions and desires.

The Frankenstein Chronicles is a thrilling crime drama, a terrifying re-imagining of Mary Shelley’s classic novel from the point of view of a detective on the trail of demonic experiments. The series stars multi-award-winning Sean Bean (Game of Thrones, Lord of the Rings) as police investigator John Marlott investigating a series of crimes in 19th Century London, which may have been committed by a scientist intent on re-animating the dead.

New series of the popular audience favourites Call The Midwife, Death in Paradise and Silent Witness will also be coming to screens in early 2016.

Tim Christlieb, director of channels, BBC Worldwide Australia and New Zealand, said: “I’m incredibly proud of the lineup of amazing shows we will be bringing to audiences next year. From modern re-imaginings of classic novels to powerful, contemporary thrillers and new series of some of our most popular shows, there is a huge range of outstanding drama coming to BBC First in 2016, all featuring some of the most talented actors of the moment.”