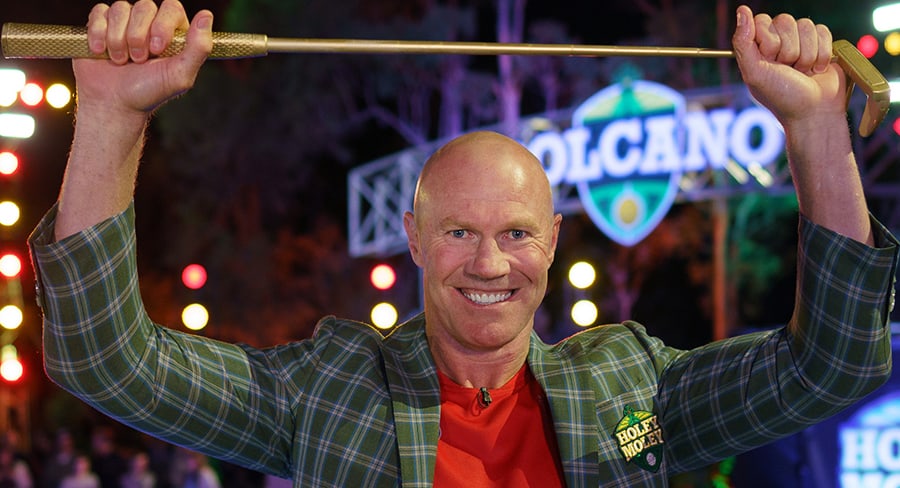 • Up next is Holey Moley Junior special episode

Barry Hall added another prize to his trophy case, when he pushed aside NRL star Mat Rogers and Olympic speed skating gold medallist Steven Bradbury to take first place in Celebrity Holey Moley, on Seven and 7 Plus.

“This is a big achievement,” said the retired professional AFL player, who celebrated his win with a backward somersault into the Polcano pool. “I’m very proud.”

Halls’s victory in the mini golf showdown followed a dramatic incident on Frankenputt earlier in the night when Denise Drysdale, tripped on the course during her head-to-head battle with Bradbury. Sustaining a shoulder injury, she was treated by medics and was forced to leave the competition immediately, graciously handing the win to Bradbury by default.

“Can you believe it? Arm in a sling!” said Drysdale, as she was wheeled from the course. “Steven, I’m out!” Celebrity Holey Moley commentator Matt Shirvington quickly chimed in with: “Bradbury has pulled another Bradbury!”

On Monday night, in a world first, Holey Moley Junior will turn the spotlight on eight of Australia’s brightest golfing prodigies as they battle it out across three wild rounds.

The competitive kids are chasing the ultimate prize: the Holey Moley plaid jacket, a golden putter, a $10,000 golf shopping spree and the title of the world’s first-ever Holey Moley Junior Champion. While the kids take the putts, their adult caddies will take the hits on diabolical course favourites, including Putter Ducky, Dutch Courage, Putt the Plank and many more.