Where are all the media brands?

Every year, leading brand valuation and strategy consultancy Brand Finance puts thousands of the world’s top brands to the test, including Australia’s Top 100. They are evaluated to determine which are the most powerful, the most valuable and the best performing.

Key findings:
• Telstra dials up #1 ranking in Australia
• Woolworths drops to #2 ranking after seven years as Australia’s top brand
• ANZ reclaims Most Valuable Australian Banking Brand
• Just over 50% of the Australia 100 brands have increased in value
• CBA remains Australia’s most powerful brand
• Qantas the standout performer with an 83% increase in brand value
• Results, graphs & further analysis are in the Brand Finance Australia 100 report

Telstra dials up #1 ranking in Australia
With a 37% increase in brand value and underpinned by a cohesive customer advocacy strategy, Telstra has gained the top place for Australia’s most valuable brand. Brand Finance Australia managing director, Mark Crowe, comments: “It is testimony to Telstra’s brand strength which has driven a significant increase in value despite only a 3.6% increase in revenue.”
Telstra has also climbed 35 places to be ranked 110 in the Global 500.
Optus enjoyed a strong year with a 31% increase in brand value that has seen it move up one place to 9th ranked Australian brand.
Mark Crowe continues, “Increasing competition from SingTel-Optus and Vodafone Hutchison, especially in the mobile sector, points to the need for continued investment in the Telstra brand both locally and overseas, in order to maintain its value and strength.”

Woolworths drops to #2 ranking after seven years as Australia’s top brand
Woolworths has slipped to the number two ranking after being Australia’s most valuable brand since 2009. Mark Crowe comments, “With sales expecting to slow at faster rates than rivals, the biggest challenge to Woolworths and other supermarket operators is coming from the German discount chain Aldi. This threat is exacerbated by weak brand and quality perceptions.”

ANZ reclaims Most Valuable Australian Banking Brand
The ongoing strength of the Australian banking sector is highlighted by the top four Australian banks occupying 3rd to 6th places. Mark Crowe comments, “ANZ has regained the number one bank rating through increased brand strength especially in terms of brand equity fuelling a 25% increase in brand value.” This strong growth helped ANZ reclaim its position as Australia’s most valuable banking brand, changing places with CBA. Furthermore, ANZ has seen its brand rating upgraded to AAA-.
Mark Crowe said, “The Australian banks have all performed exceptionally well and have recorded increases in value, growing collectively by 3.6%. The strength of the bank brands is highlighted by the fact the sector accounts for 33% of value in the Top 100 brands”.
Despite dropping one place to 4th, CBA remains Australia’s most powerful brand.

Qantas a standout performer
Qantas has enjoyed an 83% increase in value resulting in the brand recording the largest percentage increase in the Australia 100. Mark Crowe comments, “In previous years the Qantas brand has demonstrated significant resilience during a period of turbulence for the airline industry along with significant cost cutting as part of a transformation plan. The resulting turnaround has been nothing short of outstanding.”

Where are all the media brands?
You have to study the top 100 carefully to find a media brand.
In fact there is just one – Nine Entertainment which sits at 81, down from 62 in the 2015 rankings. 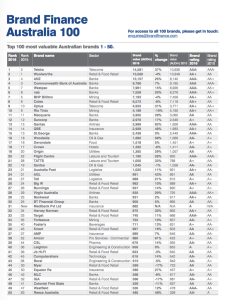