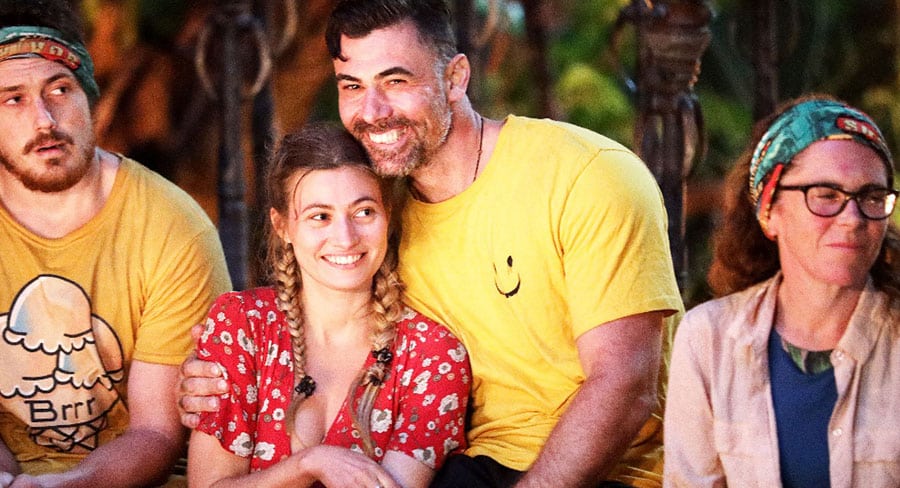 • As always in the game of Survivor, things are rarely as they seem

Second chances are rare in the brutal game of Australian Survivor but tonight, Shonee and Zach were given a lifeline when they were saved from elimination and sent packing to the only beach you don’t want to get your tan on – Exile.

Over at Vakama’s camp, Mat was taking great joy in taunting Locky with his newly found idol, wearing it smugly around his neck. Locky was seething over Mat’s antics and was still none the wiser that Mat has been secretly working with David.

At Mokuta, Shonee was out for revenge after being voted for in last night’s Tribal Council. Knowing Abbey has it in for her, being physically weaker than the others, Shonee got to work with the ‘little rascals’ alliance to start gaining control of the game.

At the reward challenge, tensions were high among both tribes. Contestants were tethered together in pairs, as they got to work setting up large wooden dominoes on a suspended beam.

Sounds simple, right? But patience and precision was the key to winning this reward. And when 19 starving contestants are playing for a full italian feast at Mama’s Kitchen, and the wind keeps knocking their dominoes over, ‘hanger’ started to take over.

In the end, Vakama were victorious and headed off to carb town. There wasn’t a dry eye in the house when they arrived to see photos of each tribe member and their mums up on the wall.

As they shared stories of their mums, crying into their garlic bread, it was the perfect afternoon to bring the tribe closer together.

At the immunity challenge, hoping Vakama would be so full of spaghetti they would sink to the bottom of the ocean, Mokuta was desperate for the win to avoid their fourth Tribal Council.

Each tribe had to take part in a floating obstacle course where they had to release a ball from an underwater cage. While Mokuta initially took the lead, things took a turn when John started panicking underwater when he went to retrieve the balls. Ultimately, this cost Mokuta the challenge, sending them back to Tribal Council.

When they returned to camp, Abbey was once again focused on keeping the tribe physically strong and getting rid of the weaker players with her eyes firmly set on Shonee. However, Zach decided it was time for him to start making moves and appealed to Harry, Sharn and Shonee to get rid of John. But when Nick got wind of the idea, he took the opportunity to throw Zach under bus and tried to convince the tribe to get rid of him.

As always in the game of Survivor, things are rarely as they seem and tonight’s Tribal Council was no exception. Before placing their votes, Jonathan announced that they weren’t going to be voting someone out of the game. They will instead, vote to send two people to Exile Island.

And with that, it was Shonee and Zach who scored themselves a one way ticket to Exile until further notice.