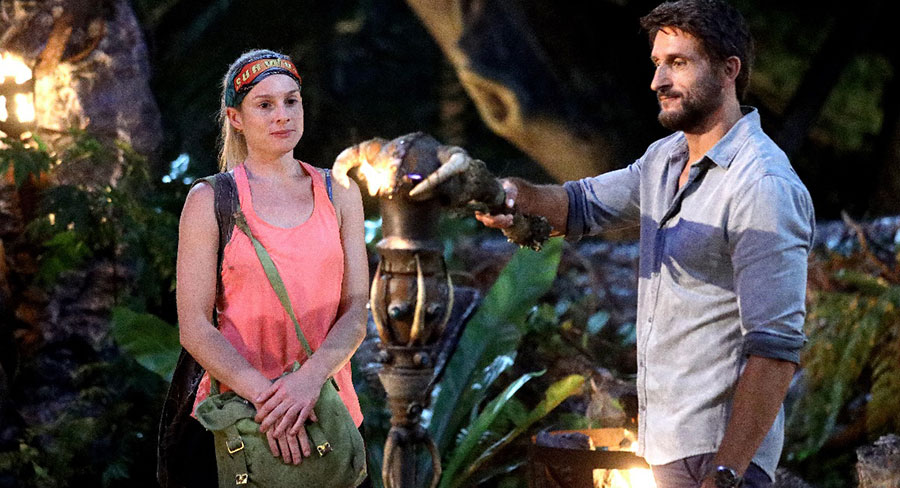 • After being the first to offload her barrel, Michelle knew the tribe was gunning for her.

A lack of strength in the immunity challenge proved to be Michelle’s downfall and saw her torch snuffed on tonight’s Australian Survivor: All Stars.

Waking up after the tribal council that turned the game on its head, David’s majority was completely shaken. Brooke and Locky were convinced Mat knew they were voting for Jacqui, so Locky went fishing for answers, determined to sniff out the mole in the tribe.

With fish and chips up for grabs at the reward challenge, everyone was chomping at the bit to win, but it was Vakama who walked away victorious.

However, all was not as it seemed when the tribe made it back to camp and saw it wasn’t ready made fish and chips awaiting them. Instead, it was a bag of potatoes and fishing gear to help them DIY their dinner.

Knowing an idol was back in play, everyone started to hunt around the reward searching for gold. However, it was ‘The Godfather’ Mat who found a secret compartment in the crate that contained the idol.

As Mat stood proudly displaying his new idol, the majority alliance were fuming.

Not one to take any risks, David set about doing what he does best and created a fake idol. Happy with his efforts, he was convinced if it came down to him playing it, it would rattle the whole camp.

The immunity challenge was all about strength, with tribe members having to hold 25kg barrels above a ceramic tile. Sitting out as Mokuta’s extra member, Shonee failed to grab the idol clue hiding under her set. Rookie error!

Michelle was the first to offload her heavy barrel, passing it to Zach, who was stuck holding two barrels.

After 75 minutes of swapping barrels between tribe members on both sides, it was Vakama who avoided Tribal Council when John and his fresh hair braids dropped a barrel for Mokuta.

After being the first to offload her barrel, Michelle knew the tribe was gunning for her.

Henry on the other hand, decided it was time to vote Sharn out of the game. Little did Henry know, his attempt at changing the vote caused Nick to flip on Henry and he pitched to the tribe to vote for Henry instead.

With the tribe in disarray and few people on the same page, the vote fell two to Sharn, three to a surprised Henry and five to Michelle, who was the fourth person voted out of Australian Survivor: All Stars.