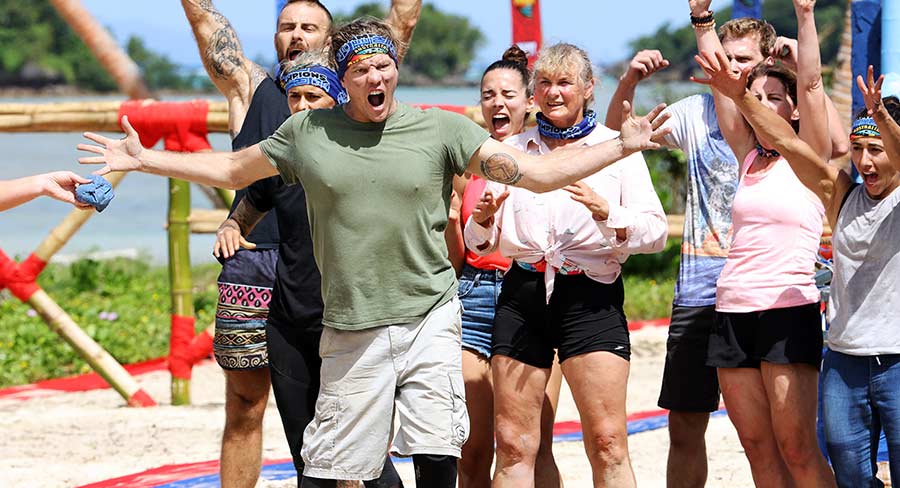 The third season of Australian Survivor: Champions vs Contenders premiered on August 1st where we were introduced to the 12 everyday Australians who will go head-to-head with the 12 Australian Champions in a battle to become the sole survivor and the chance to win $500,000.

Set in the tropical island of Savusavu, the contestants where immediately thrown into the thick of it when they had their first challenge, where they wrestled and dragged one another through sand in order to take home precious food and goods for camp.

Although the Contenders took out more battles, five wins to four, the Champions walked away with food and vital supplies for camp including the flint.

Back at their camps, the Champions got to task early setting up their shelter under the expert guidance of their two former Commandos, Steve and Damien.

At the Immunity Challenge, the two tribes needed to summon feats of strength, teamwork and mental agility to claim victory.

After trailing for most of the challenge, the Champions came back in the final stage to snatch victory thanks to the precision throwing of Former Special Forces Commando, Damien.

Back at camp, the Contenders tribe had to pool votes and decide the first person eliminated from the competition. “Sneaky Steve” seemed to be the one chosen by the group but, Matt, a Traffic Police Officer from Queensland, was suspicious of his teammates. In an act of desperation, Matt went on an unconcealed search for an idol, without any luck.

At the season’s first Tribal Council, Matt attempted to gain control of the situation by speaking out about his tribemates.

In doing so, Matt called out members of his tribe for being dishonest, sneaky and deluded.

While this began in an attempt to out Steve for not being a team player, his attempt to discourage his tribe of Steve only made things worse for himself with his tribe beginning to turn on him.

In a tight vote, Matt was voted the first contestant to leave Australian Survivor: Contenders Versus Champions just ahead of Steve, after a last minute change in votes due to Matts outburst.

On the night’s result, host Jonathan Lapaglia said: “Well tonight it became clear that the first impression you make in Survivor can sometimes be your last.”