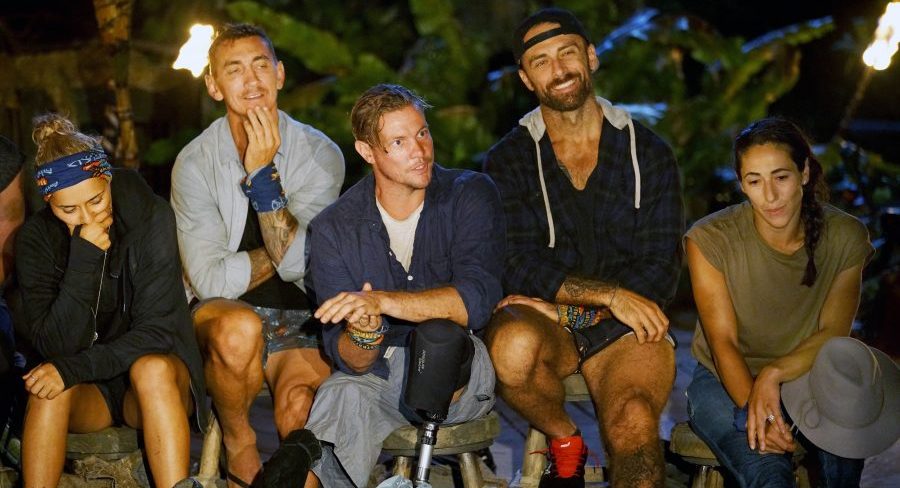 On the third episode of Australian Survivor: Champions Versus Contenders, former Special Forces commando Damien Thomlinson was voted out at the third tribal council.

Following the nail-biting elimination of Russell Hantz, the Champions team arrived at the reward challenge ready to rumble. In a soccer-style game of shoot-outs, the Champions proved too good for the Contenders and walked away with a highly coveted fishing set.

The mammoth Immunity challenge saw teams manoeuvre a giant wheel around a course. As two players on top of the wheel fished for baskets, another two assembled a mega puzzle.

The Champions set the pace early in the challenge, but some poor basket handling and a puzzle fumble from poker player Jackie saw the Contenders surge ahead to their second straight Immunity win.

Knowing her puzzle palaver had put a target on her back, Jackie turned on the water-works in a bid to plea for her spot on the tribe.

Jackie said: “I’m a poker player. I have no problems with deceiving people.” Football greats Mat, Moana and fitness specialist Steve called Jackie’s bluff, but that didn’t stop her from scrambling to convince the team that Damien was the weakest link and that he must go if the team is to stand a chance at winning challenges.

At Tribal Council, Steve urged his tribe mates, before they headed to vote, to think for themselves and not follow the herd. As they all filed in to vote, Moana’s visit to the urn was bittersweet as she was able to pocket the hidden immunity idol.

For Damien, however, this trip to Tribal Council would be his last with six votes enough to snuff his torch.