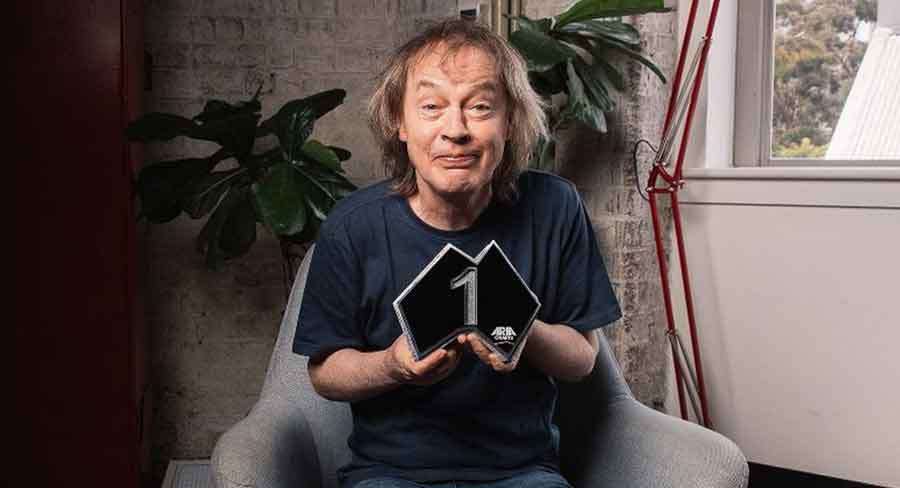 24kGoldn featuring Iann Dior holds at #1 for a sixth week with Mood.

The battle for the top remains a race between 24Goldn and Ariana Grande with Positions from Grande spending another week at #2 after two weeks at #1 and four weeks on the chart.

The highest new entry of just three top 50 chart debuts this week is Billie Eilish with Therefore I Am at #3. Ahead of a performance of the song for the ARIA Awards this week from LA, the track is the third time in the top 10 for Eilish this year.

The most significant chart arrival this week is at #21 where Fly Away from Tones and I debuts. This is the third new tune to chart this year for Tones and I after Bad Child (April) and Ur So F**kInG cOoL (June). Toni Watson is also still represented on the chart of course by Dance Monkey which sits at #37 after 76 weeks including 24 of those weeks at #1. The new song is reportedly Watson’s first new music from this year destined to appear on her debut album.

The third new entry this week is Whoopty from US rapper CJ at #41.

An impressive chart takeover by Australian artists this week and an appropriate way to start ARIA Week. Australian artists have seven of the top eight positions on the Album Chart with Ariana Grande the only interloper with Positions at #3.

Four of those seven Aussies in the top eight are new this week. The three maintaining a top 10 spot are Kylie with Disco at #2 in its second week, The Kid Laroi with Fuck Love (Savage) at #4 after 17 weeks and Guy Sebastian at #5 with T.R.U.T.H. for a fifth week.

The four new arrivals are:

#1 AC/DC with PWR/UP. The sixth #1 for the iconic rock band comes with their first album in six years. Sadly missing of course is the late Malcolm Young, but happily back on the album are vocalist Brian Johnson, drummer Phil Rudd and bass player Cliff Williams.

ARIA notes this week AC/DC achieve a chart record by being the only Australian group to have #1 albums at least once each decade over five decades. AC/DC topped the Australian Albums Chart in the pre-ARIA era with Back In Black (#1 March 1981). In the ARIA era (July 1983-present), they’ve also had #1s with Live (#1 November 1992), Ballbreaker (#1 October 1995), Black Ice (#1 October 2008) and Rock Or Bust (#1 December 2014). With six chart toppers, they become equal first (with Hilltop Hoods) in terms of Australian groups with the most #1 albums.

Angus Young commented this week: “A very big thank you to Denis, and all at Sony Music Australia, and everyone else in Australia who’ve put in their time, effort and creativity to get PWR/UP to #1! Also a big shout out to all our fans, old and new. You are, and always have been, our guiding inspiration.”

ARIA CEO Dan Rosen said: “Congratulations to AC/DC on topping the ARIA chart for a record-breaking fifth decade in a row. In a year of uncertainty, at least we can rely on AC/DC to rock the roof off the place. Legendary barely describes their place in Australian music, and after all these years, we continue to salute AC/DC.”

#7: Onefour with Against All Odds. Western Sydney’s finest crash into the top 10 with their debut album chart entry after four singles charted earlier this year. The six-track EP also an intro and two interludes.

#8: Josh Teskey & Ash Grunwald with Push The Blues Away. Teskey Brothers vocalist and rhythm guitarist John Teskey has helped blues musician Ash Grunwald to his ARIA top 10 debut with this collaboration. The public got a taste of what was to come after the ABC Sunday music show The Sound featured a performance of the album track Thinking ’Bout Myself back in August.

#10: Andre Rieu with Jolly Holiday. The second Christmas album to chart top 10 this week and one of many which will flood the chart in coming weeks. The music on this album is from Christmas concerts in 2019 held in Maastricht. Tracks on the album include Jingle Bells, We Wish You a Merry Christmas, I’m Dreaming of a White Christmas and Silent Night.

Four other releases debuted in the top 50:

#15 Chris Stapleton with Starting Over. The fourth studio album from the US singer-songwriter.

#19 Johnny Cash and the Royal Philharmonic Orchestra. Recorded at Abbey Road, this in another in the series that feature the RPO showcasing classics in a new music setting. The producers worked with Johnny’s son John Carter Cash who was executive producer.

#22 Benee with Hey U X. The much-anticipated debut album from the 20-year-old New Zealander who is making waves globally. She performed on The Late Show with Stephen Colbert last week.

#35 Andrea Bocelli with Believe. Also on The Late Show last week was Andrea Bocelli. The Italian tenor will be performing a televised Believe In Christmas concert on December 12.

The Christmas season doesn’t officially start until Human Nature say so, and there have been sighted this week at #46 as The Christmas Album returns to the chart.