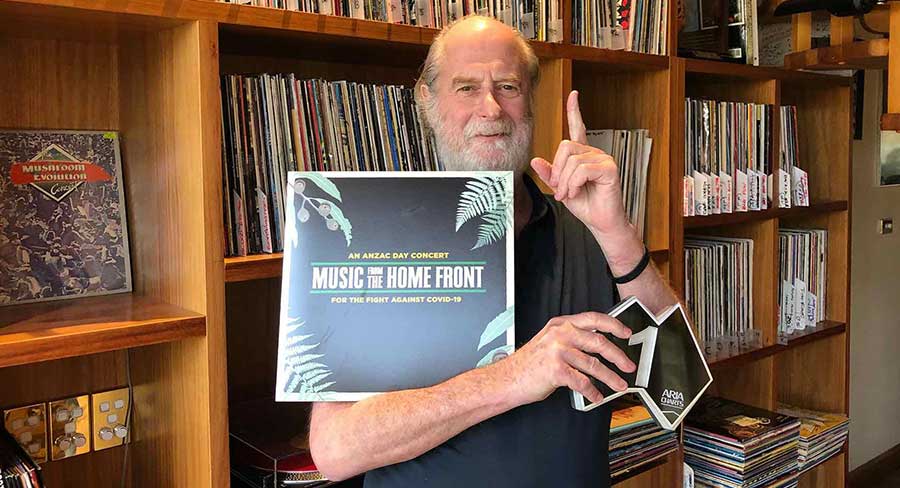 Not a lot of movement again on the chart with no change to the top four, no new entry into the top 10 and just two chart debuts in the top 50.

WAP spends a fourth week at #1 for Cardi B featuring Megan Thee Stallion which equals the female hip hop chart record of Salt-N-Pepa when they spent four weeks at #1 with Let’s Talk About Sex in 1992.

Two bullet performers inside the top 20 were Conan Gray with Heather (#20 to #13 after four weeks) and Tate McRae with You Broke Me First (#22 to #15 after five weeks).

The two top 50 debuts belong to:

#37 Saweetie with Tap In. Top 50 debut for the US hip hop artist with a track from her debut album Pretty Bitch Music which is not far away from release.
#47 Internet Money with Lemonade featuring Gunna, Don Toliver and Nav. A second single from the hip hop collective from the album B4 the Storm.

The Mushroom Group see its compilation Music From the Home Front jump back into the chart for a third week at #1 and a total of eight weeks in the top 50. The re-entry was spurred on by a triple vinyl release of the set.

All profits from Music From the Home Front go to Support Act – Australia’s only charity delivering crisis relief services to artists, crew and music workers as a result of ill health, injury, a mental health problem, or other crisis that impacts on their ability to work in music.

“It’s hard to believe that four and a half months after Music From the Home Front first etched its moment in history, the long awaited release of the triple vinyl album, together with the CD and downloads, returns this fantastic album back to #1 on the chart. It’s an amazing testament to all the artists and people involved.”

“Congratulations to Michael Gudinski, Mushroom and all the artists involved in Music From the Home Front on getting back to #1 with an incredible vinyl edition of the album. It shows just what a special moment it was for Australia, and how our artists come together and heed the call when we need them most.

“I would also like to congratulate the awesome Powderfinger on reaching #2 with their 20th anniversary edition of Odyssey Number 5. It is a landmark album by one of this country’s great bands.

“And congratulations to San Cisco, on debuting at #3 on the ARIA Charts with their wonderful independent album Between You and Me.

“They are all part of a great week for Australian artists on the ARIA Charts. We have seen people all around the country continue to engage with our artists and music, and it is vital in helping many Australians get through these challenging times.”

The other artists who claimed a top 10 finish this week:

The re-release of the Brisbane band’s fourth album didn’t quite match the chart-topping success of the original when released in September 2000. The album originally spent three weeks at #1 and features their most successful chart single – My Happiness – which peaked at #4. The album secured the band six ARIA Awards in 2001 including Album of the Year. Somehow Odyssey Number 5 tops this week’s ARIA Vinyl Chart despite the vinyl release of Music From the Home Front. Powderfinger sadly confirmed there are no plans for gigs when they declined the invitation to play at this year’s AFL Grand Final being held in Brisbane.

#3: San Cisco with Between You And Me. A second top 10 achievement for the Fremantle trio with their fourth album. Their previous release The Water peaked at #17 in May 2017 while their second album Gracetown made it to #2 in March 2015.
#8: Slim Dusty with Slim & I. – The soundtrack to the forthcoming documentary from producer Chris Brown and director Kriv Stenders tells the story of Slim Dusty and wife and musical collaborator Joy McKean. As well as their own music, the project feature contributions from Paul Kelly, Missy Higgins, Troy Cassar-Daley and Kasey and Bill Chambers.
#9: Wil Wagner with Spiralling. Extended EP or mini album – seven tracks from The Smith Street Band singer. There’s also an 18-minute podcast where Wagner answers questions from fans. This is Wagner’s first new solo music since his 2013 release Laika.

#22 Big Sean with Detroit 2. The fifth solo album for the Detroit rapper.
#28 Rex Orange County with Bcos U Will Never B Free. The debut album from the British indie pop artist gets its first ever vinyl release to mark its fifth anniversary.
#39 6ix9ine with TattleTales. The second album from the US rapper.

Top Photo: Back at #1 –Mushroom Group chairman Michael Gudinski with Music From the Home Front in his record library