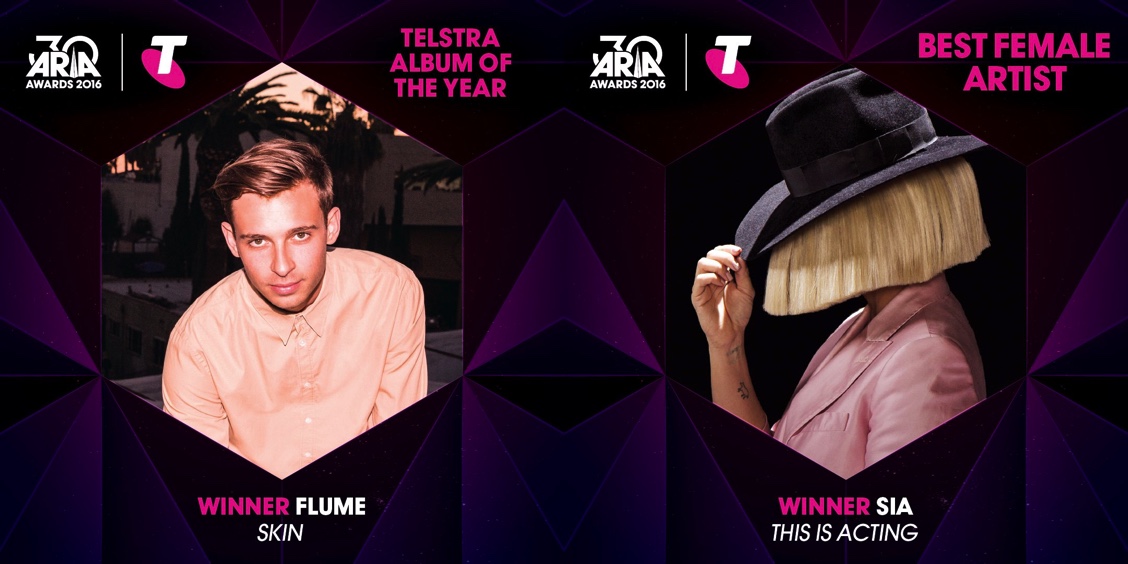 The sold-out 2016 ARIA Awards Presented By Telstra held at The Star Event Centre, Sydney and broadcast on Ten capped off a big year for the Australian music industry at an awards show that was dominated by special performances from ARIA Hall Of Fame recipients John Farnham, Jimmy Barnes and Crowded House.

But it was Flume, the young electronic music producer hailing from Sydney’s northern beaches, who dominated the awards, winning the Telstra Album Of The Year ARIA Award for his ARIA #1 album “Skin”. He also picked up ARIAs for Best Independent Release, Best Male Artist, Best Dance Release, Best Pop Release for “Never Be Like You” featuring Kai who was on hand to accompany Flume’s mash-up of the four-times platinum hit, “Never Be Like You”, and three-times platinum single “Say It” with Tove Lo.

The wins last night add to his haul after a clean sweep of the Artisan ARIA Awards for Producer Of The Year, Engineer Of The Year and Best Cover Art taking his overall 2016 ARIA Awards tally to eight.

The best was perhaps saved for last with Hall Of Fame inductee and 20-time ARIA Award-winner John Farnham closing the show with an epic rendition of his worldwide hit “You’re The Voice”, which included The Veronicas helping out on backing vocals.

One of the highlights of the evening was the induction of Crowded House – Neil Finn, Nick Seymour, Paul Hester, Mark Hart and Matt Sherrod – into the ARIA Hall Of Fame by Flight of the Conchords duo Bret McKenzie and Jemaine Clement. Missy Higgins and Bernard Fanning then performed two of the band’s biggest hits, “Fall At Your Feet” and “Better Be Home Soon”, before Crowded House performed “Distant Sun” from the band’s 1993 album “Together Alone”.

Jessica Mauboy on stage with Jimmy Barnes: It was a bumpy start for the live audience with delays and then a false start. However, after Jessica Mauboy and Barnesy tried to blow the house up with their soaring vocals it all started to make sense.

Best acceptance speech: On a night where many seemed to warble for way too long, Neil Finn handled it wonderfully with a shaggy piece of paper he read from as he worked his way through his thank yous.

Best contemporary performance: On a night dominated by rock vets playing their greats, Flume showed off the most polished contemporary tunes.

Best International Artist
One Direction – Made in the A.M & Four (SYCO/Sony Music Entertainment)