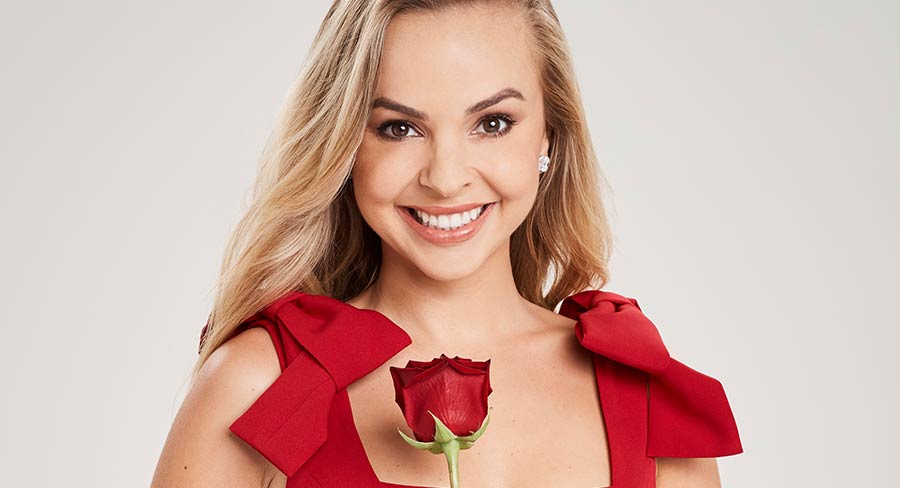 • This season, the first ever 24-Hour Yellow Rose is introduced.

The Bachelorette premieres tomorrow night at 7:30 on 10 starring Angie Kent.

Sweet yet sassy, this 29-year-old Bachelorette is wide open to falling in love, but also isn’t afraid to tell Mr Wrong to hit the road.

Known for being one half of the hilarious screen critic duo with Yvie Jones, Kent’s infectious smile, sharp wit and courageous attitude recently carried her far in the most recent series of I’m A Celebrity…Get Me Out Of Here!

Across the series, Kent became a pillar of the jungle family, where she formed a very close bond with 2019’s King of the Jungle Richard Reid and cemented herself as a firm fan favourite.

The diverse bunch of Bachelors after Angie’s affections include a Landscaper, Freediving Instructor, Refrigeration Mechanic, Mobile Zoo Owner, BMX Stunt Rider, Luxury Car Salesman, Aircraft Engineer, a local Politician, and not one, but two Firefighters. Could Angie’s Prince Charming be among these men?

Producer Hilary Innes steers the production of both The Bachelor and The Bachelorette for Network 10. Finding a new Bachelorette is never easy, but she’s convinced Angie Kent is a good one.

Casting the lead role is key of course to both strains of the franchise and much depends on it. This year the producers settled on the second celebrity that has fronted the series in five years – Kent. She follows Sam Frost, Georgia Love, Sophie Monk and last year’s Ali Oetjen.

Picking celebrities seems to help ratings, but they are not easy to find, Innes explained to Mediaweek. “We have had two – Sophie and now Angie – one well known and the other starting out. It is good to mix it up. As we showed when we went from Nick Cummins to Matt Agnew, to go back to someone unknown can be refreshing. After Nick we needed a circuit breaker and Matt was a great circuit breaker.

This season, the first ever 24-Hour Yellow Rose is introduced. The bachelor who makes the strongest first impression on the opening night cocktail party will get an incredible advantage – the opportunity to spend 24 hours alone with Angie on the first single date.

Hosted by Osher Günsberg, The Bachelorette Australia is made for Network 10 by Warner Bros. International Television Production.