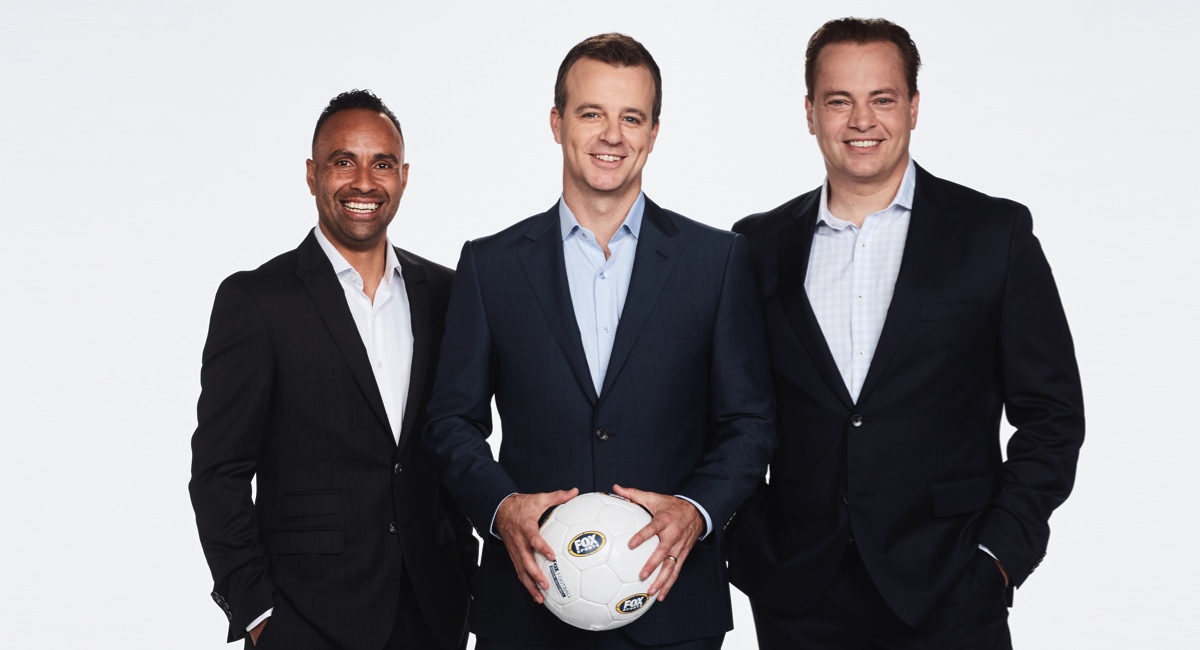 It is a busy time of year for Fox Sports’ Adam Peacock. He is an integral part of the broadcaster’s A-League coverage and he also anchors Fox Sports’ coverage of Socceroos matches.

Peacock’s A-League duties begin with the first game of each round as he anchors the coverage of the Friday night matches from the ground working with John Kosmina and Andy Harper.

“On Saturday the coverage comes from the studio with Mark Bosnich and Archie Thompson (both pictured with Peacock above). We can also be seen on FTA channel ONE with the Fox on ONE package which includes The Back Page Live before the Saturday night game,” Peacock told Mediaweek.

“If you think US politics is fascinating at the moment, have a look at Australian football politics – they can match it.”

“Then on Sunday I usually go to a game and this week it was Brisbane.

“On Monday it is back to Fox Sports HQ for the analysis show A-League Hour, which is for the football anoraks. We look at the tactics and it is fascinating for someone like me because we get to tap into the minds of guys who have played in the biggest arenas in the world under some of the best managers in world football. On the Monday show we have time to take a breather and think about how to look at the games with a fresh take. We have a bit of fun with it because it is sport – it’s not about life and death.

“On Tuesday I get to re-introduce myself to my kids and my wife.”

Two years ago Peacock published a book called “That Night” about the Socceroos qualifying for the 2006 World Cup. With an important fortnight for the Australian national team this month, we asked Peacock if there might be a sequel.

The short answer was “no”. He elaborated: “Doing the book was fabulous experience. The book covered how Australia beat Uruguay to qualify for the World Cup. The thing that made that night important was that prior to that, seven times over 32 years we had stuffed it up. Australia found new and interesting ways to stuff it up. At that time we finally had a bunch of guys who had become heroes in different parts of the world for one reason or another. Playing for Australia they came together to somehow do what we hadn’t done in 32 years. That game went to extra time, then went to penalties, and the result hinged on the final kick. It was very unique.

“I don’t think we will experience something like that if we get past Honduras, but the emotion could be close to that if it goes to penalties and we manage to qualify again.”

Peacock on the A-League

“The League needs to expand. There are a few things going on politically at present. If you think US politics is fascinating at the moment, have a look at Australian football politics – they can match it.

“Fans have so much emotion here and that is the biggest investment you can make. The fans are a bit frustrated with what is happening because they want to see the sport in Australia reach its potential.

“The other codes to some extent are already doing that, but football for so long has never been able to grasp the opportunity it has for itself. It does get frustrating at times that you see that potential not being realised.

“The A-League in its current form is only 12 years old and you can’t expect everyone to start supporting it right away.

“Once it has been going for another generation it will start to do well. The sport needs to continue investing time and energy in attracting people to the game.

“People are starting to appreciate the A-League for what it is. It is not the best competition in the world, but it gives Australian footballers a huge opportunity and we get to see them grow.”