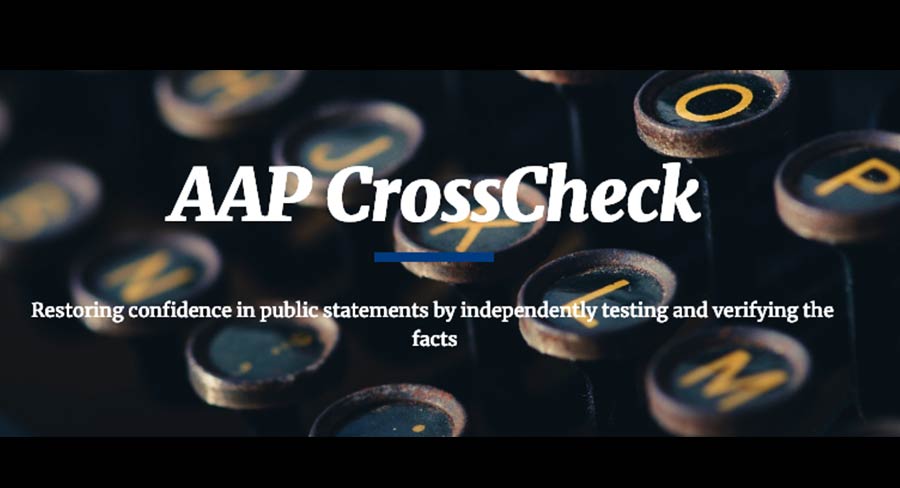 • AP CrossCheck will be fully operational from February 25,

Australian Associated Press has said it will reinforce its place as the nation’s trusted, independent news agency with the launch of AAP CrossCheck, a dedicated fact-checking unit designed to combat misinformation during the upcoming election campaigns:

AP CrossCheck will be fully operational from February 25, with a mission to verify questionable claims made by public figures during both the NSW and federal election campaigns.

Developed in line with AAP’s core principles of producing accurate, unbiased and succinct content quickly, the new unit begins operations at a time when truth in news has never been more important.

“We will scrutinise the statements being made by some of the most influential members of society so that, through our media partners, Australian voters can make decisions based on the verified truth rather than political spin,” AAP editor-in-chief Tony Gillies said. “While it will initially focus on political content, we see AAP CrossCheck evolving into a permanent and integral part of Australia’s media landscape.

“AAP CrossCheck is our way of supporting the work of our media partners, and championing public expectations around accountability and integrity from those in positions of trust.”

Developed with the support of the Google News Initiative, AAP CrossCheck will maintain full editorial independence under the direction of long-time journalist, editor and media executive Louise Evans and her team.

“AAP CrossCheck is forging a newer, faster fact-checking model. While we will never compromise on accuracy, we want to be far more responsive to the demands of the news cycle so we can get the truth out quickly,” Evans said.