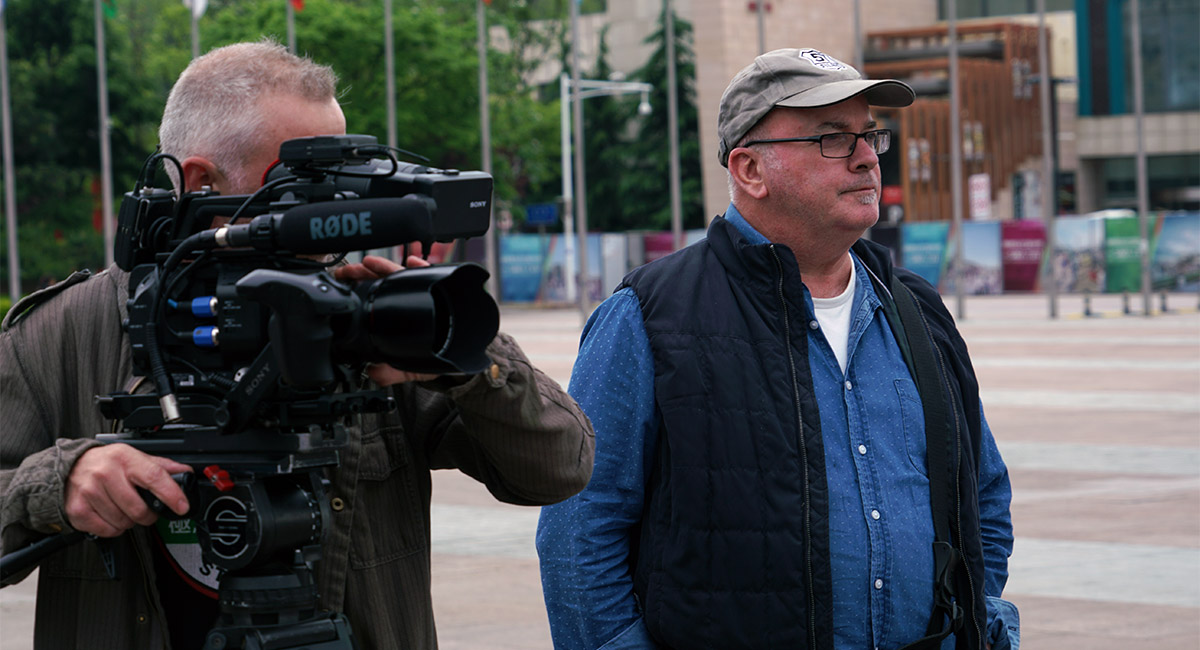 Adelaide’s 57 Films is planning for growth

Covering the TV production scene in Adelaide hasn’t been a priority at Mediaweek. One of those businesses we have neglected in the South Australian capital is 57 Films.

Under the ownership of Paul Ryan, 57 Films is active in film, documentary, online education and television programs with Ryan working as a producer and director on various projects.

Ryan was formerly with Nine Adelaide when local productions were more common than they are these days. He has also spent time working for the South Australian Film Corporation.

However, he has been forging his own way as an independent producer based out of Adelaide for more than a decade. He worked originally with Adelaide-based creative services business KOJO before starting 57 Films six years ago.

The business has been successful breaking into the Chinese market. When Mediaweek tried to track down Ryan late last month we had to wait a little while for him to return to Adelaide from his latest working trip in a market that has been attractive to production businesses around the world.

57 Films has a diverse income stream ranging from TVCs to documentary and factual work. Ryan himself works more on the latter. 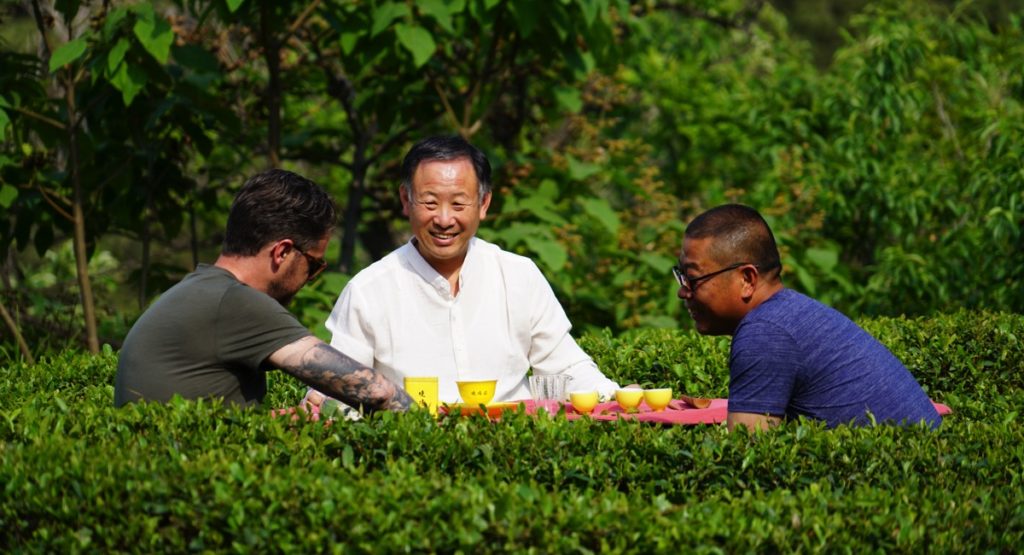 As Ryan explained: “The bread and butter of the business though is fee-for-service work whether it be resources companies or manufacturers who require productions containing corporate information. We also do a lot in the training sector, which includes online learning content for Exxon and BHP, which helps us with a consistent income stream.”

Ryan labels Chef Exchange a landmark production for 57 Films. “It broke us into our China relationship that has become incredibly important. We have built good relationships with QTV (Qingdao Broadcasting and Television Station) in the Shandong Province through Chef Exchange and that relationship has matured to a point where it was easy for them to be supportive of Soccer Swap.

“Also with their support we were able to win a fairly large project for the city of Qingdao last year. We are in the final stages of finishing a promotional piece on the city for trade and travel. It is called Qingdao My Story. They haven’t released it yet. For us it’s great business to get a commission like that, especially for a company out of little old Adelaide.”

While 57 Films does work with some Chinese crew when working there, Ryan said he takes his own DP, award-winner Aaron Gully, “a very, very skilled DP I take to China. There are also a number of other key crew we take over.

Chef Exchange series one, so far, has only been screened on Nine Adelaide and QTV and CCTV in China. “For series two we are in discussion about European distribution options. We are also hoping to go national in Australia, although at the moment I’m not sure if that will be Nine or another network.”

Without wanting to name the brands involved, Ryan said 57 Films was currently speaking with potential sponsors for the second series. “We are also looking at developing it as a global format. It is a pretty simple formula – two chefs from different countries hanging out and learning about food culture. What we have tried to do is celebrate the difference between the two cultures even down to the language. The two chefs resort to sign language at times as part of a naïve journey that we think works pretty well.”

Season two of Chef Exchange should be eight episodes. “We are also planning regular online content released by the chefs who share information and tips. The viewer will be invited to get exclusive access.” 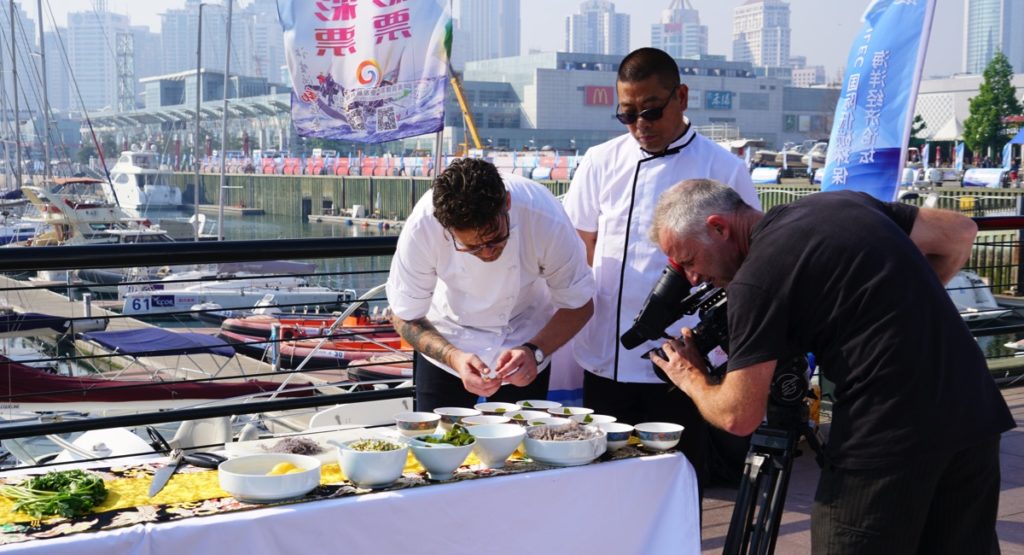 For the first series the chefs were Jock Zonfrillo and Qu Jianmin with Ryan noting there was scope to involve a number of chefs in the future.

“Our big focus now is on the Chinese platforms like WeChat and Weibo through Tencent. If we can crack that and do that properly the footprint will be massive.”

As to other projects Ryan would like to get under way, he told Mediaweek he has had a sitcom in his top drawer for close to 15 years. “One day. One day. It is called Shelf Life and is set in a supermarket. It is funny, quirky and can offer wall-to-wall product placement!

“Another idea we have for China involves Chinese involvement in the Australian goldfields in Ballarat.”

Ryan was in China recently with David Koch and Port Adelaide for the first AFL home and away game in that market. “We have a relationship with Port Adelaide and last year we worked on 25 episodes of The AFL Show with them for China, which followed the story of a Chinese player they recruited into the Power. Every week there was a half-hour program screened in China.”

The program, only ever screened in China, was on CCTV 5 during every round of the AFL in 2016. “It was the Power’s project but we were the production company that put it together for them.”

Developed in consultation with China’s Qingdao Broadcasting and Television Station and due to be filmed in Adelaide and Qingdao, the series will follow a soccer competition between an Adelaide under 14s team and a team from China’s Shandong Province.

The program came to us, said Ryan. “It came from Adelaide United and their conversations with the South Australian Film Corporation and they really fostered it to do the exploratory work and they put it out to tender for a production company to make it happen.

“The swap itself is a real thing with young soccer players getting involved in a program for improving their soccer skills. As that progresses the program starts to get really exciting. Being involved right from the beginning is really interesting because you find different angles you couldn’t get if you came to the program late.”

While 57 Films has signed an agreement, Ryan acknowledged the project will have plenty of challenges facing it including how the players taking part in the swap will be selected. “From our point of view the selection process will create good television with the human drama element.”

At the moment there is no Australian broadcaster attached to the series as it’s been too early for those conversations. “I need more of a story before I take that to market.”

Ryan expects Soccer Swap to start pre-production later this year with production under way in 2018 with content ready, at least online, during the journey.

Working with Ryan on the series are producers Nicole Miller and Tao Yu from 57 Films.

Talented chefs Jock Zonfrillo and Qu Jianmin were reunited as production on Chef Exchange series two began last month in China. For the first time, Zonfrillo and Jianmin travelled outside of Qingdao and explored the cuisine of Shanghai. They also paid a visit to Jianmin’s village before returning to the Shandong province to cook a large meal for a group of patrons at Qingdao Harbour. Production will continue across Australia throughout the coming months.”

On track to being the best sports broadcaster