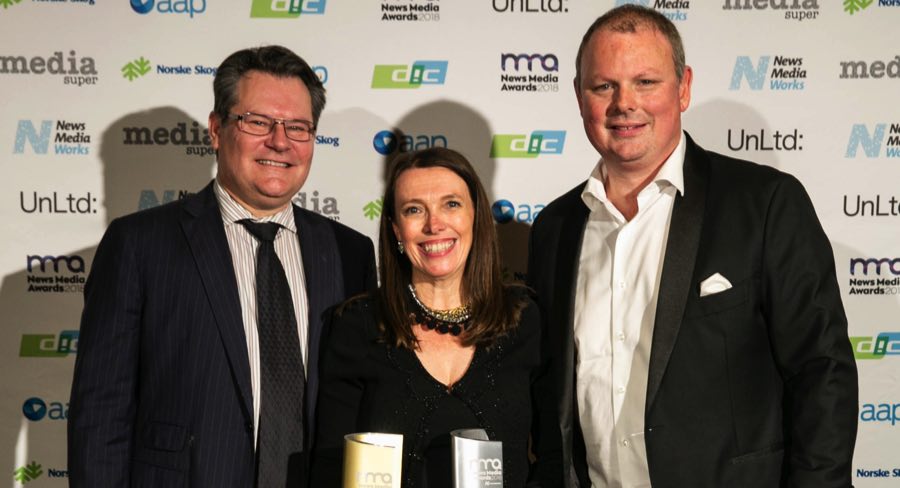 Editor Michelle Gunn: ‘Our most successful bundle is the weekend newspaper plus digital.’

News Corp’s The Australian has had a good year so far with its digital subscription growth and the uptake of its true crime podcast The Teacher’s Pet. The podcast has clocked up over 22 million downloads since the first episode dropped earlier this year.

Another reason for the national masthead to celebrate is that its weekend paper The Weekend Australian took home the titles of inaugural News Brand of the Year and the Weekend News Brand of the Year at the refreshed 2018 News Media Awards (formerly called the Newspaper of the Year Awards). The Weekend Australian is a seasoned winner at the awards, having won the weekend news category four times in the last five years. However, the paper’s editor Michelle Gunn was still “surprised” by the recognition. “The win means the world to me because it is recognition of everyone who works on the paper,” Gunn told Mediaweek.

In 12 months to June 2018, The Weekend Australian’s readership climbed to 639,000. This shows the importance of it to the local news consumers, Gunn said. “That may surprise some people because there is a lot of talk about the decline of print. For us, the weekend newspaper is the biggest newspaper of the week.

“Our most successful bundle is the weekend newspaper plus digital. Thirty-two percent of our new subscribers last year took that option.”

There is still a strong urge among the consumers of The Australian to pull its weekend edition apart and spread the broadsheet over the dining table to immerse in the reading it has on offer.

“It’s an interesting thing,” Gunn said. “For some readers it is something they grew up with. They love the tactile feel of paper.

“People still like to read a 3,000-word article without scrolling on a screen.

“We are constantly challenging our reporters, photographers and artists to come up with new and innovative ways to present their content.”

This was a part of the reason The Australian started investing time and energy in podcasting. It has certainly reaped benefits with Hedley Thomas’s The Teacher’s Pet. Gunn is still coming to terms with its success.

“Can you believe that?” she said. “A podcast from Australia has had 22 million downloads!”

The Australian has also produced audio books and e-books to diversify its offering.

In September 2017, the national title launched Chinese-language online edition of the newspaper.

“It is not a complete edition of the paper. We choose some stories that would appeal to Chinese speakers in Australia. It is a growing segment,” Gunn explained. “We have had a lot of good feedback about it.

“We have some reporters who collect those stories, translate and manage that site. It’s a small toe in the water, but it’s been a successful innovation.

“Our attitude here is that it is not an either/or proposition. We have to do our very, very best in both print and digital,” Gunn said.