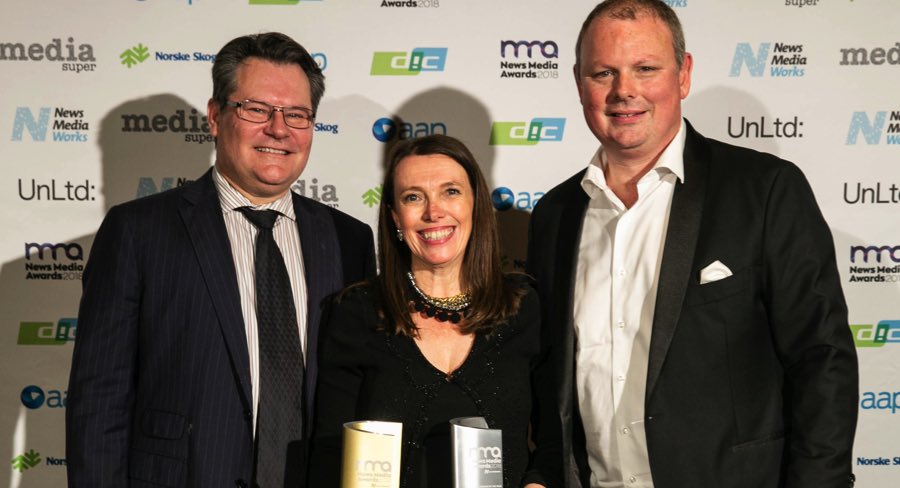 More than 400 people attended the awards ceremony at the Hilton Sydney on the evening of September 14.

News Corp’s The Weekend Australian was crowned as the 2018 News Brand of the Year at this year’s News Media Awards. For the first time in the event’s history the awards night combined the former PANPA Newspaper of the Year Awards and the Advertising and Marketing Awards. More than 400 people attended the awards ceremony at the Hilton Sydney on the evening of September 14. The Chaser’s Craig Reucassel and Andrew Hansen were again the emcees for the evening. The event took place at the conclusion of the annual INFORM News Media Summit.

“I would like to congratulate all this year’s News Media Awards winners and acknowledge the incredibly high standard of the region’s publishers and their brands and people. The winning entries demonstrated that our region’s publishing excellence is of a world-class standard,” said NewsMediaWorks CEO Peter Miller.

“Our newly rebranded News Media Awards are now in their 49th year and recognised as the region’s pre-eminent awards in the news media industry. The new-look awards reflect the changing nature of news brands to meet the needs of advertisers and readers, where trust to provide quality, credible journalism is critical to their success.”

BEST EXECUTION OF PRINT ADVERTISING FOR A CLIENT

BEST EXECUTION OF DIGITAL ADVERTISING FOR A CLIENT

BEST EXECUTION OF INTEGRATED ADVERTISING FOR A CLIENT (OPEN)
This is Where, Brand USA, NZME

BEST USE OF PRINT (OPEN)
S.O.S – Save Our Schoolkids, The Courier-Mail, News Corp Australia

BEST USE OF DIGITAL (OPEN)
How to spot a rip, theage.com.au, Fairfax Media