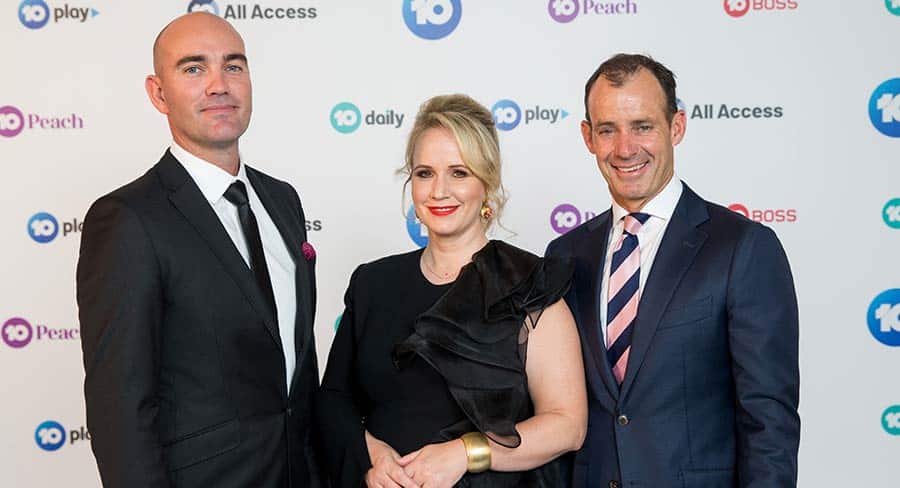 “This signals a new era for us and it brings all our brands together with some consistency.”

The corporate rebranding of what is now Network 10 was perhaps the biggest takeaway from the 2019 Upfronts this week.

CEO Paul Anderson told Mediaweek on the Your Money TV channel this week it was the first time in 27 years there had been a rebrand, back when Bob Hawke was the Australian prime minister.

“This signals a new era for us and it brings all our brands together with some consistency. Changing the multichannel names to 10 Peach and 10 Boss really frames what those channels are about.”

Anderson said there is no new audience target that comes with the new names. “Peach is 16-39, which is similar to what ELEVEN used to be. Boss has somewhat of a transition from ONE where it now has big shows like Madam Secretary, Judge Judy and Hawaii Five-O and some sport.” Network 10 has resisted the temptation to launch any new channels. Seven will soon have four multichannels and Nine already has four, with those channels helping lift the network share. (Nine’s new Your Money is yet to be counted toward the combined Nine Network share.)

“The way we look at it and depending on what you launch, you can cannibalise yourself. We figure that if we are going to invest money and time into something it should perhaps live on 10 Play, 10 Daily or 10 All Access.”

It is just on 12 months since CBS took control of the Australian channels, with Anderson noting organising an upfront under their ownership was not much different than previous years.

“CBS are broadcasters and they understand TV and they do the same thing that we do in their Upfronts. They are involved because they understand what we are trying to achieve. We talked a little bit at the Upfronts about our strategy, which is producing different premium content across a whole range of platforms because that is how our audience wants to view the content. We need to be far batter at monetising the delivery on those other platforms.”

By the end of the year Network 10 will have two platforms online streaming long-form content – 10 Play and 10 All Access.

“10 Play will continue to be a long-form catch-up service for content you want to see that has screened primarily within 30 days,” explained Anderson.

“If you want to binge on whole seasons of content then you can do that on All Access in HD. It is a world-class platform that CBS has rolled out in the US and Canada. It completes our ecosystem. We don’t have a subscription model and it is a way of us dragging some younger audiences into our platform and then maybe recycling them back through other parts of the business.”

There will be no free plan to the new service. “We will have our linear channels, 10 Play for long-form catch-up, 10 Daily for short-form video and then All Access for subscriptions.”

Anderson commented that it had been exciting in recent months rebuilding the broadcaster’s sales team after the decision to takes sales back in-house after the years with MCN. “We now have the opportunity to build a sales team that puts the needs of our clients and agencies first. We are virtually ready to go.”

Building the team has meant a significant investment in both personnel and technology. “We are leveraging CBS’s technology stack for our digital and they have an amazing broadcast system they trade off in the US and in Australia under some different brands. For us to be able to leverage off that is really powerful.”

The size of the CBS investment in content for next year has been labelled as “unprecedented” by Anderson. “The loss of the cricket has somewhat chartered our course and we have decided to program for 50 weeks of the year, ignoring the traditional non-survey ratings break. Having broad entertainment content, with still what is not a bad sports offering, is a chance for us to do something different.”

Regarding that sporting content, Anderson revealed he will be at the Melbourne Cup this year, even though the rights don’t start until 2019.

“The Victorian Racing Club has entrusted its carnival with us across the four days with our commitment to promote the carnival across the whole year and it fits with their strategy.”

Anderson denied the acquisition was a loss leader for 10. “It’s not a loss leader. It is one of the most iconic sporting events in Australia and it draws a massive audience, not just on Tuesday but across those other days.”

Rebranding the news service 10 News First seems to indicate CBS is happy to leave the bulletin at 5pm, and not take on Seven or Nine at 6pm. “It is something we often discuss externally and internally. Our News at 5pm has been there for a long, long time and we are investing in our local news in each market. News content is a big part of 10 Daily and we also cover news in The Project. People forget it is a news show, with news that is done differently.”

Finding four shows to keep from the eight Pilot Week programs justified the investment, said Anderson. “We are proud of what we have done, which was a massive undertaking developing those shows to screen across just one week. It is something we will definitely be doing next year.”