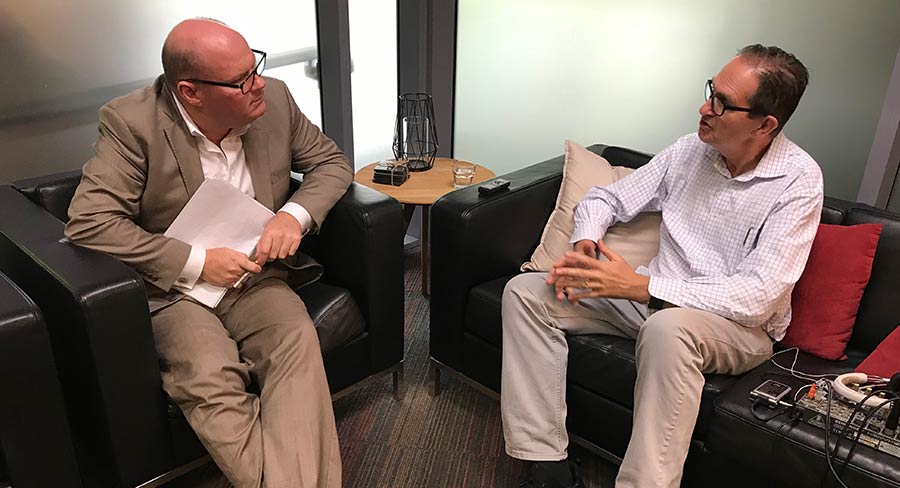 Content discussions covered everything from Studio 10 to 10 Daily to the re-branded early evening bulletin.

Dagan reinforced the broadcaster’s commitment to news, spoke about plans for closer ties with CBS and was frank about re-entering the breakfast TV space and extending primetime news coverage. Content discussions covered everything from Studio 10 to 10 Daily to the re-branded early evening bulletin.

Here are some highlights:

The 10 Network’s director of news content hasn’t quite completed 12 months back at his old network. But as he told Mediaweek in a podcast Tuesday, the first anniversary “is screaming towards me”.

Dagan said that any perception people may have had about the broadcaster not being committed to news is not correct.

“10 is enormously committed to news in all its forms. The strict definition of news and how we have looked at it historically is whether it is a bespoke news bulletin. That is not the only test these days. We have an engine room of news content that it is growing and is larger than it has been for a long, long time at 10.

“We have made some strategically key appointments across multiple programs and multiple platforms and now more than ever the strength and the commitment of the news at 10 is enormous.

“We are very proud of our link to CBS where the news heritage is also very strong. I am very often in conversations where that commitment to news at CBS and 10 is loudly and proudly very real.”

Dagan said 10 provides content to CBS every day with stories regularly appearing on CBSN, the streaming news service of CBS in the US.

“As recently as the Christchurch massacre Dan Sutton, our senior reporter in Christchurch, was the lead story on the CBS Evening News. That is something almost unheard of for an Australian reporter. They were effusive in their praise for his work and Dan did a fantastic job.

“We have also just announced our first CBS news secondment and we are keen for our people to benefit from the wisdom and the knowledge that the CBS news team can provide in New York. We will be sending a couple of our people to New York twice a year to get a better sense of how CBS News operates. We will also be giving them a sense of how we operate down under – there is a lot to learn on both sides.”

Ratings not the only measure of engagement

“It is our job and my job to produce the best possible product we can in a broadcast news environment and in an online news environment. We are ensuring we can get every eyeball we can and growing that audience.

“I am pleased to say the audience share for 10 News First is up since our rebrand in October and I can also that is the case for Studio 10 since its fifth birthday last year.

“We are also enormously happy and proud of the enormous results 10 Daily has produced in close to its first 12 months.”

News and information for people under 50

We asked Dagan if his job was different to that of the news directors at Seven and Nine in that he needs to find news for people under 50.

“We do have a different thought process around the substance of what we do every day. We are clearly achieving substantial demographic success for people under 50 with news and content elsewhere on the network.

“There are other ways we can identify as a more youthful news product with a more dynamic presentation style and a set that helps as much as the content.”

Listen to the Mediaweek podcast with Ross Dagan here.