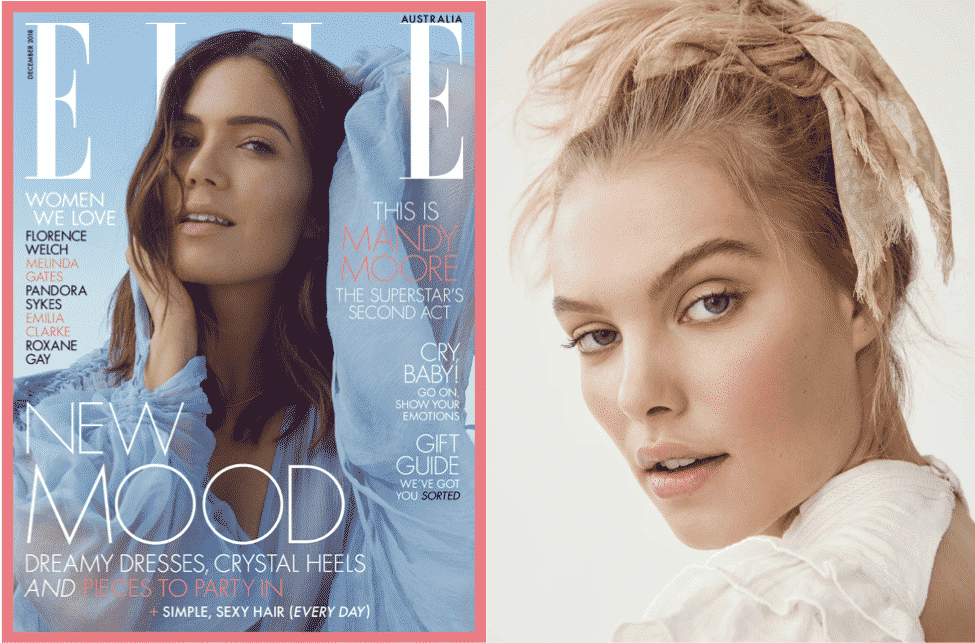 The cover shoot features an interview with Moore, who opens up about her career, the social media-savvy way she started dating her husband Taylor Goldsmith, and her Golden Globe-nominated role in This Is Us.

Moore met Goldsmith after posting a photo of his band Dawes on Instagram and after one date they began corresponding online while Goldsmith was on tour. Reliving the early stages of her relationship with Goldsmith, whom she married last weekend in a private and intimate ceremony, Moore says, “I completely fell in love with him without having done anything more than given him a hug good night.”

The pair crossed paths as Moore’s divorce to rocker Ryan Adams was being finalised, and they were married last weekend in a private ceremony at home.

“When I met Taylor, I was more of a fully formed woman,“ says Moore, “Before, I don’t know if I would have been open for it had I not gone through what I went through in my previous relationship.”

The actress also gets intimate on her career comeback, revealing, “There was no forward momentum in any respect and it wasn’t just frustrating and daunting, I was questioning whether or not I was meant to be a performer any more.

“I think I got to a point where I just felt like the engine had been completely shut off on the machine and I couldn’t find my way back to it and I couldn’t start it up again.”

Three years later, Moore is on a career high, with a critically acclaimed role in cult TV drama This Is Us. “You wait an entire lifetime, an entire career for something like this. You just appreciate it and savour every moment. It’s the best job I’ve ever had.” Readers will receive one of two bespoke scarves designed in collaboration between Elle and the Spell team, made from sustainable Lenzing™ Modal and attached to the magazine with sustainable biodegradable packaging.

“We’re thrilled with the December issue and can’t wait to share the magazine with our readers,” says editor Genevra Leek. “Not only is this issue full of stories of inspiring, powerful women, making for plenty of thought-provoking holiday reading, but the Spell scarf is bound to be a must-have accessory for summer and beyond.”

Bauer Media’s Elle December is on sale from today, Monday November 26. The #ELLExSpell scarf is available with the magazine at Coles, Woolworths and selected newsagents.