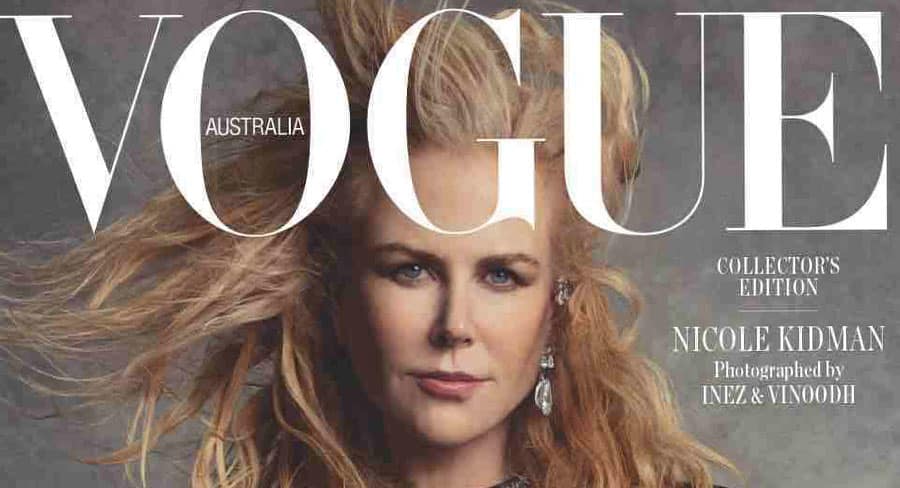 There are many reasons why purchasing a copy of the 60th Anniversary edition of Vogue Australia is essential. For anybody with an interest in magazine publishing in Australia the December edition is a treasure trove.

“Over the past 60 years, Vogue Australia has grown with Australia and Australians. And in this exciting digital age offering unlimited opportunity, we have so much more growing to do.”

And it’s some Editor’s Letter running across four pages! 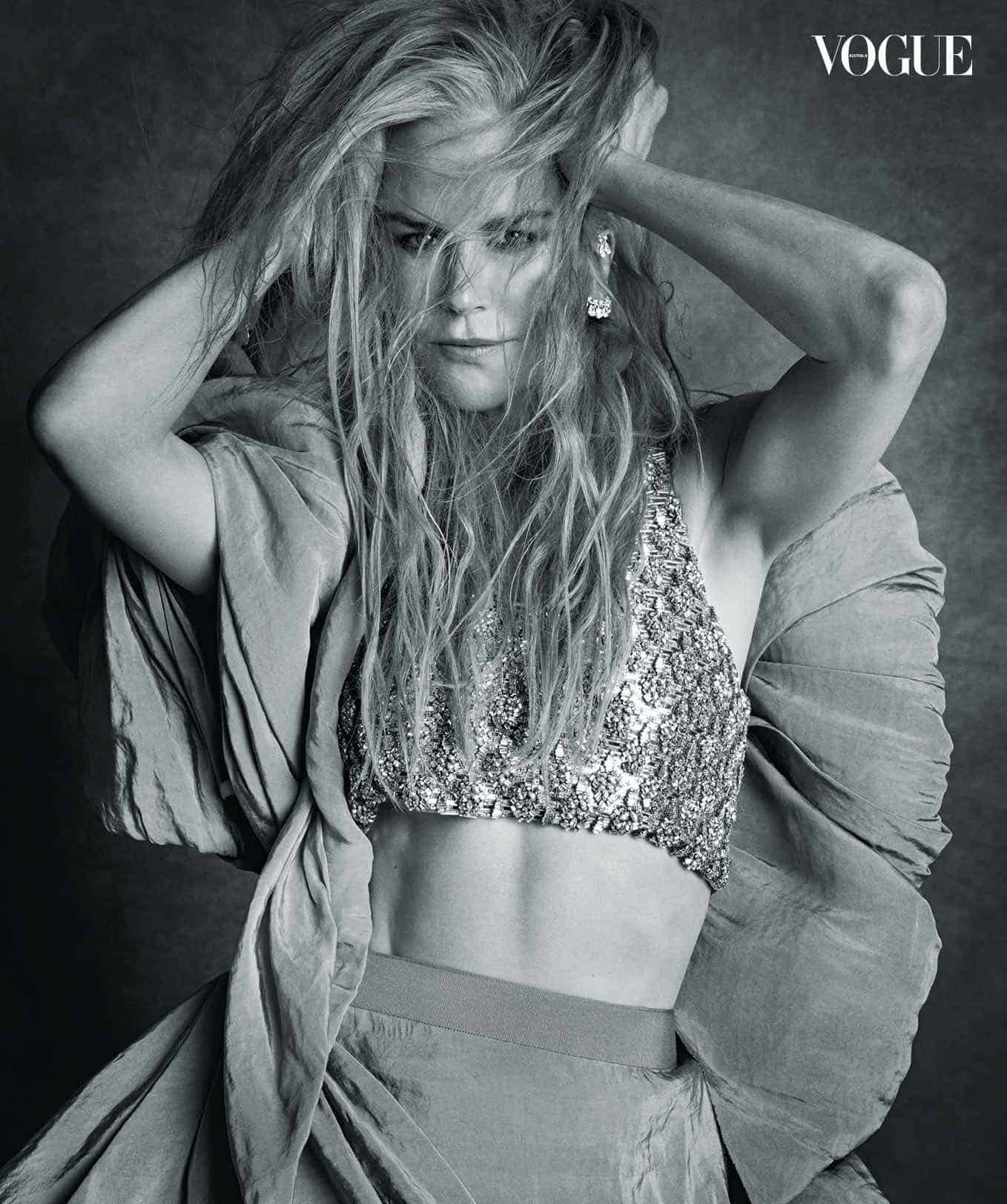 Also in the note to readers, McCann addresses the lack of Indigenous storytelling in Vogue’s history. “Australia is proudly home to the longest continuous living human culture, stretching and connecting back 65,000 years. And yet, as a Sydney-born and raised woman, I am embarrassingly ignorant of it. Publishing this edition has given me the chance to start to educate myself – and perhaps you, our reader.

“As good fortune would have it, the incredible Bangarra Dance Theatre is celebrating its 30th anniversary this year too, and so we had the opportunity to photograph some of its dancers dressed in archival costumes at beautiful Little Bay in Sydney. I thank Yvonne Weldon for her poignant piece ‘True country’ and her guidance for our upcoming celebrations in Sydney. And also NGV director Tony Ellwood for introducing us to photographer Michael Cook, and NGV’s curator of Indigenous art, Myles Russell-Cook, for profiling artist-jeweller Maree Clarke and artist-fashion designer Lyn-Al Young. I hope the celebration of Indigenous culture and talents will be woven into Vogue for the next 60 years and beyond.”

Vogue Australia is also available on the new Apple News+ along with the rest of the titles from News Corp Australia – from its daily metro newspapers to its prestige print products.

McCann told Mediaweek: “We are working very closely with the Apple team and they redesign a lot of our content specifically for that platform. We are finding it is driving significant traffic to our site and to VIP.”

McCann added that a brand that she also looks after, GQ Australia, is also doing very well from Apple News+. “This speaks to something that we have always known which is the male audience do tend to be very digital when it comes that that type of content.”

Vogue Australia is able to sell the Apple News+ opportunity to an advertiser, and that is American Express with the anniversary edition. “American Express own 60th anniversary issue on that platform. We have proven we are able to monetise exclusivity on that space. We already partner with Amercian Express on Vogue Fashion’s Night Out. They appreciate high impact go-to-market opportunities.”

Foxtel’s Showcase channel is this week premiering a documentary on the brand in Australia. “This was a very new experience for me and not part of my natural skillset,” said McCann. 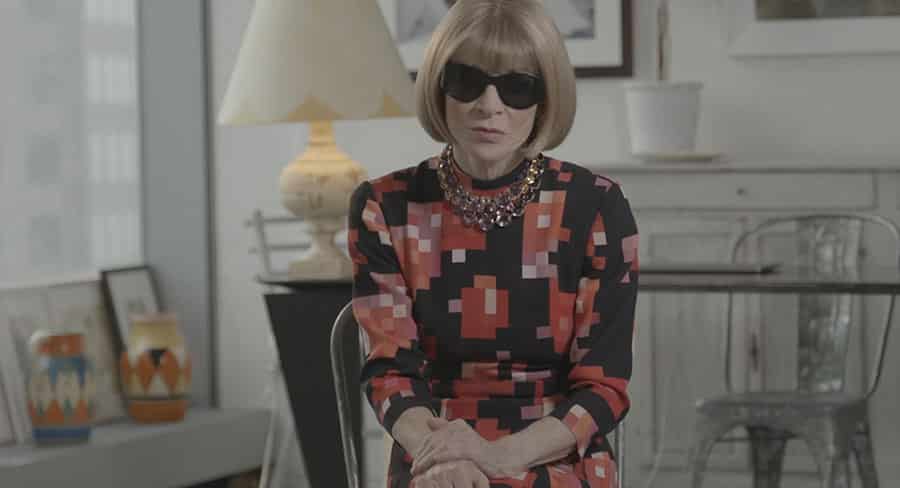 “We have some wonderful interviews with Anna Wintour and Baz Luhrmann plus Emma Watson, Catherine Martin, Elle Macpherson and Margot Robbie. We got such great people who were willing to take time out of their busy schedules to sit down and talk about Vogue.

“The documentary also goes behind-the-scenes at the cover shoot with Nicole Kidman which helps give people a sense of what it was like to put the edition together.

“There is also a focus on Vogue Australia’s history and its founder Bernie Laser and his career. He went on to do great things at Condé Nast internationally.” 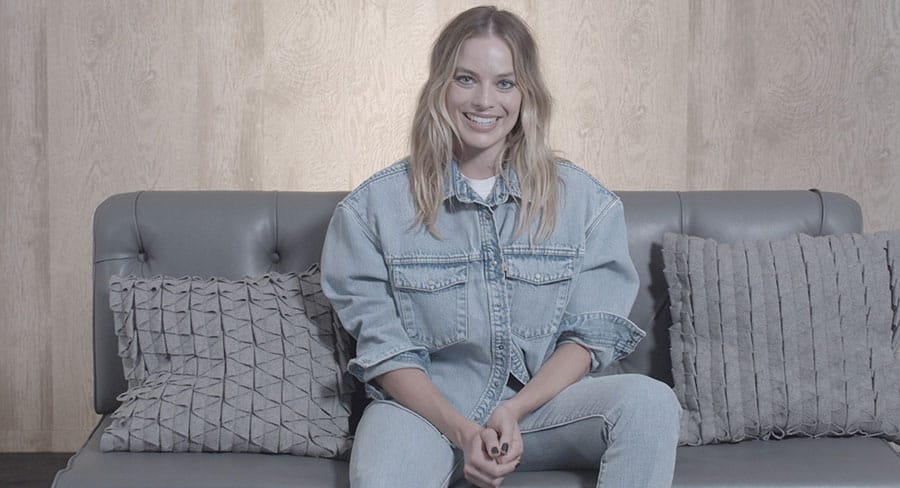 McCann has also invited Edward Enninful, the editor of British Vogue to celebrate the Australian anniversary and he will do fashion shoots, in association with Destination NSW, in iconic Sydney locations during his stay.

“Those features will be published both in Australian and British Vogue next April. Around that there are a series of four special events we will be hosting over two days.”

McCann is looking toward December 22 when she can “fall in a heap” after a busy year.

Looking over the past 12 months, McCann said: “We have had a good year with positive revenues for the brand. We have been operating in a very difficult market and to be able to achieve what we have done is great. It’s great to be able to celebrate Vogue’s 60th in such a healthy position.” 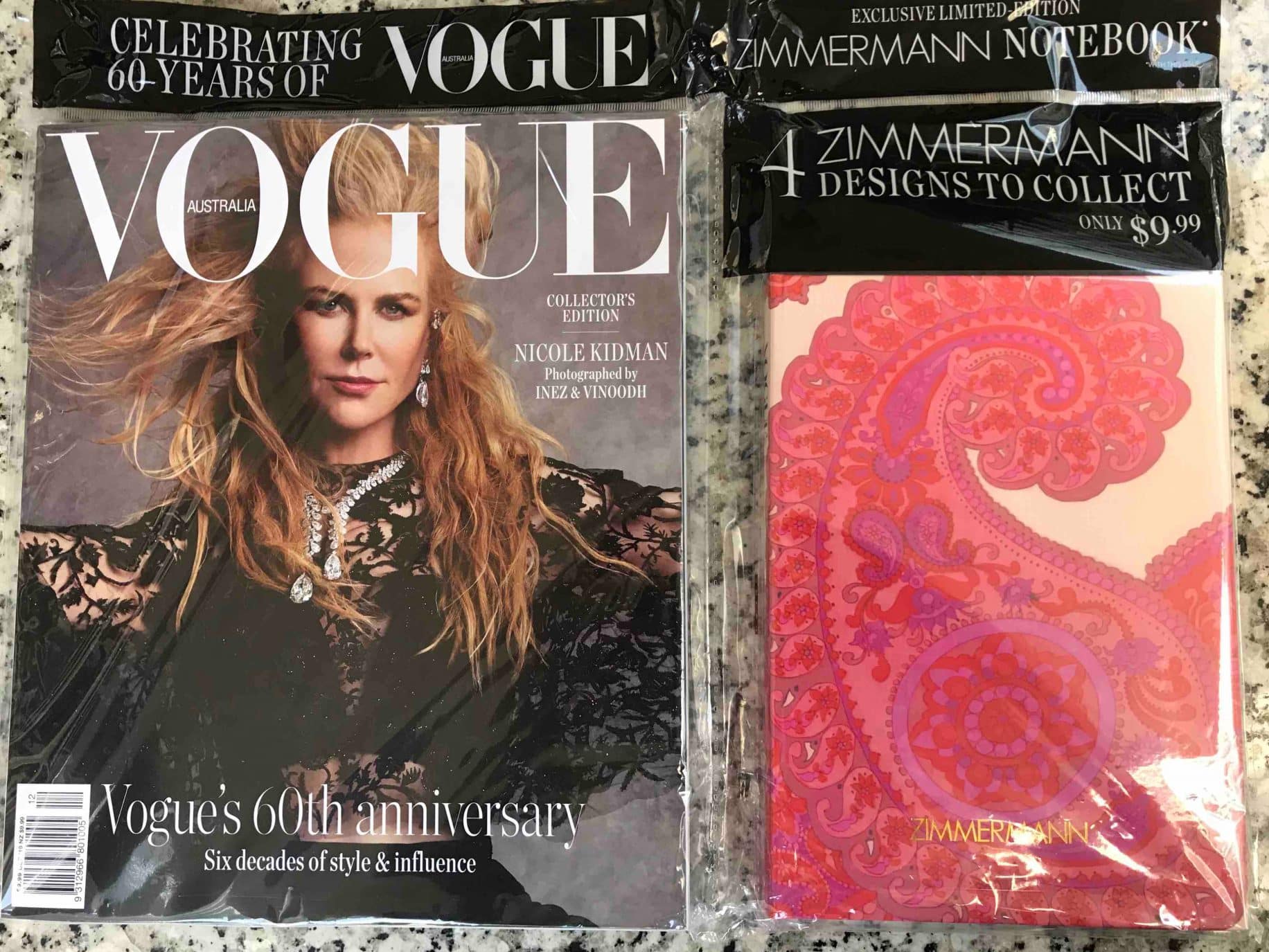 • At some retailers the Vogue Australia retail offer for December is priced at $9.99 and comes with a hardcover Zimmermann-designed notebook.
• Australia takes over: While Nicole Kidman features on the cover of Vogue Australia December, Cate Blanchett is on the UK cover. No Aussie on the US cover though where it is Phoebe Waller-Bridge.
• The magazine shows off its Australian team in the anniversary edition. So that would be one group photo, right? Wrong. To fit them all in – 63 people – Vogue features them in four photos.
• The history of Vogue Australia is detailed in the anniversary edition. It starts with journalist David Leser remembering his father Bernie Leser. There is also a piece by Conde Nast chairman of the board of directors Jonathan Newhouse about Bernie leading the company across four continents.
• Just eight editors across 60 years. The former Australian editors write for the December issue about their time on the brand – Eve Harmon, June McCallum, Nancy Pilcher, Marion Hume, Juliet Ashworth and Kirstie Clements. Sheila Scotter is the only one no longer with us after she passed away in 2012 at the age of 91. 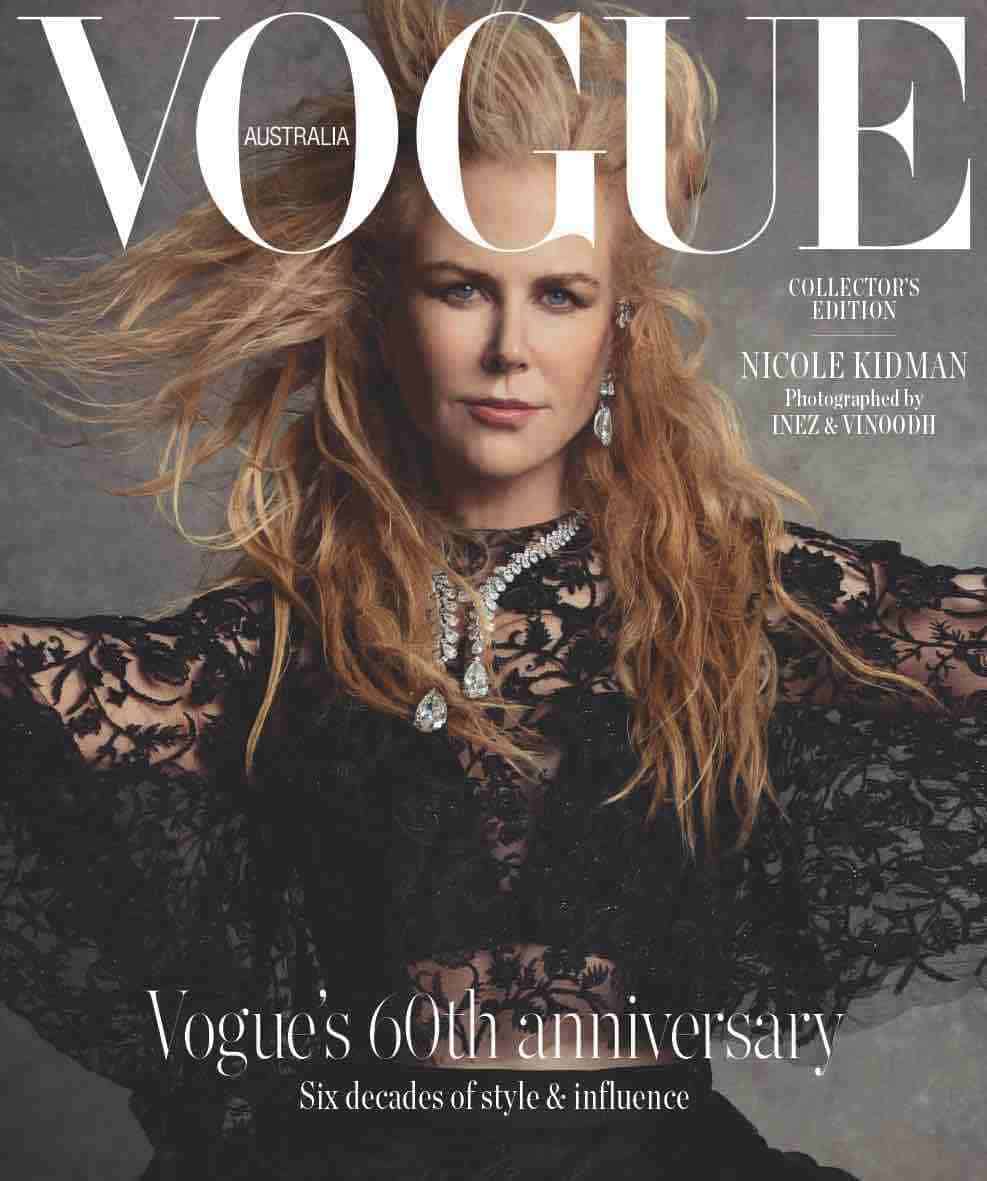