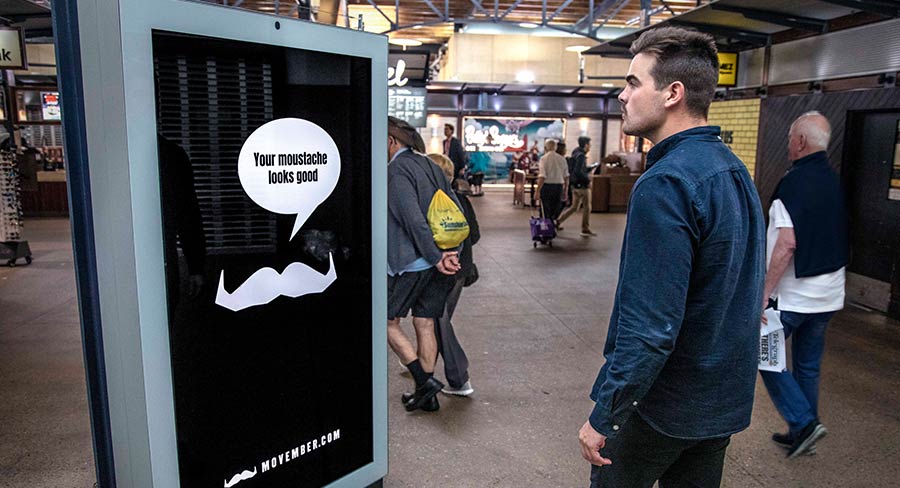 “Movember is a great initiative so we’re pleased to have played an active role in supporting such a worthy cause. “

This Movember VMO became the only outdoor media network in Australia to launch a Smart Movember campaign, triggered by facial features. This is part of a partnership with the Movember Foundation, and Quividi.

Dan Hill, CEO, Val Morgan Group said, “Movember is a great initiative so we’re pleased to have played an active role in supporting such a worthy cause. In collaboration with Quividi, we were able to deliver an important health related message to thousands of Australians via engaging, contextually relevant creative.”

Appearing at VMO’s retail and service station network locations, the Smart Movember creative was triggered for passers-by who had beards and moustaches – serving tailored messaging to each user. The facial recognition software could also detect those who were smiling, encouraging them to “add a mo” in attempt to increase participants in Movember and raise funds.

VMO’s proprietary audience measurement tool ‘DART’ has indicated that almost 390,000 people were exposed to the campaign as of publication.

Juliette Smith, Chief Marketing Officer for the Movember Foundation commented, “We are really proud of this creative campaign that we have collaborated on with Quividi and VMO. The moustache has always been designed to grab attention and start important conversations about men’s health and this takes it to the next level. Innovation is really important to the Movember Foundation, as people are increasingly asked to fundraise or donate to charities. It is important we continually trial new technology, in order to help us reach our goals of reducing the number of men dying prematurely by 25% and halving the number of deaths from prostate and testicular cancer by 2030.”

“Movember is one of the most innovative charities we had the chance to work with” said Ke-Quang Nguyen-Phuc, CEO, Quividi. “We were really pleased to leverage our technology and collaborate with VMO to help mobilising on men’s health and carry out this worldwide-first facial hair reactive DOOH campaign”.

One interesting tidbit the data revealed was that moustaches are 3 times more popular than beards, with the ‘mo’ creative being triggered most often.