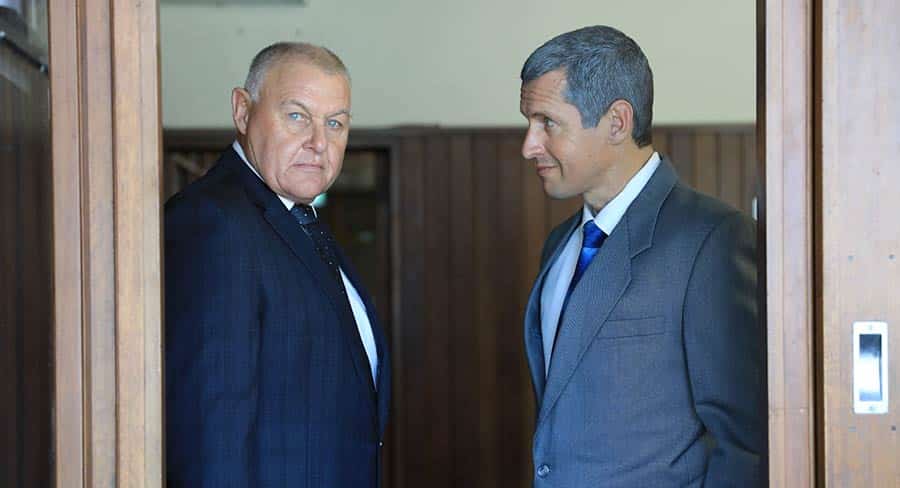 BUSHFIRE WARS – from Sunday December 2 at 8.30pm on National Geographic

The ancient Australian landscape is home to one of the most dangerous killers on earth – bushfire. A small spark, caused by lightning or a careless human, can turn into a raging inferno in minutes. Left unchecked, it destroys everything in its path, leaving nothing but tragedy and a barren, charred landscape in its wake.

Bushfire Wars is a new, local production that tells the story of the men and women from the Department of Biodiversity, Conservation and Attractions, Parks and Wildlife Service in Western Australia, who risk their lives to fight the scorching enemy. The eight-part series is a world-first as specially “fire trained” camera crews go into the field alongside the bushfire fighters to capture the action. This landmark series will use state-of-the-art camera technology with 40 fixed cameras on helicopters, planes, bulldozers, four-wheel drives and body-cams to give viewers a terrifying and intimate window into a world rarely seen. Be immersed in the drama of these frontline heroes as they stand together, risking life and limb, to fight this deadly natural enemy.

LOUIS THEROUX – from Thursday December 6 at 8:30pm on BBC KNOWLEDGE

MOTOR MONDAYS – from Monday December 10 at 8:30pm on Discovery

Get your week off to a revving start with Motor Mondays. This night of motor mastery unites two heavyweights of the biz: Jay Leno makes his Discovery Channel debut in a new season of Jay Leno’s Garage, while Aaron Kaufman, Richard Rawlings’s former right-hand man, returns with another season of Shifting Gears with Aaron Kaufman.

Jay Leno’s Garage sees the legendary comedian taking the fast and the furious car fan for a high-octane spin across America to explore people’s obsession with all things automotive and uncover some of the most incredible and ingenious vehicles ever built. Celebrity guests include Jamie Foxx, Arnold Schwarzenegger, Chris Evans, Trevor Noah, Josh Duhamel, Billy Crystal, and more. Straight after, custom car builder Aaron Kaufman is back in brand new Shifting Gears with Aaron Kaufman. This season he takes a stab at building and racing a rally car. He and his crew set out to navigate this fast-paced world they know nothing about – where winning is rare for novices and losing can be fatal.

ROTTNEST ISLAND: KINGDOM OF THE QUOKKA – Sunday December 16 and 23 at 8:30pm on National Geographic

On the west coast of Australia, with the limitless Indian Ocean beyond, there is a set of islands whose animals defy all laws of nature. The three islands lie side by side, but each is ruled by a different animal. In a world-first, the life cycle of the mysterious quokka, the little penguin and the tiger snake are filmed, using the latest equipment and techniques. Rottnest Island: Kingdom of the Quokka reveals an exclusive and intimate look at the inhabitants and those intertwined in their lives on the islands and in the fringing ocean.

It has been said that no two sisters were ever less alike: one reserved and proper, the other lively and controversial, one the anchor of a commonwealth of nations, the other searching for purpose in life. Queen Elizabeth II and Princess Margaret are among the most photographed women in history. But what of the real women beyond the royal splendour, balcony and cheering crowds – beyond the Crown itself? Elizabeth was a mature child with a love of animals, and Margaret a mischievous extrovert. How has their relationship shaped the monarchy? The return of the stunningly shot series that takes you on an epic voyage of discovery of people and places through New Zealand. The enthusiastic team led by presenter Neil Oliver and six New Zealand experts in marine biology, history, and social history explore the panoramic beauty of the coastline while investigating the formation and evolution of the nation: its history, its people, and its culture. The third series kicks off in Wellington, the world’s southern-most capital city. Neil Oliver visits living Moriori artefacts and Michael Stevens hears about the day the Germans infiltrated the islands’ waters during World War II. The team explores the natural wonders of the Bay of Plenty and reveals seaside stories from locations including the white-stone city of Oamaru and the Northland region of Kaipura. In a Coast New Zealand first, adventurer Dave Murray lands his plane on remote Big Bay in South Westland.

Wild life pioneers Jonathan and Angela Scott and Jackson Ole Looseyia from classic series Big Cat Diary return to Animal Planet in this highly anticipated new natural history series. Premiering as a five-day television event, Big Cat Tales documents present-day prides and families of the lions, leopards and cheetahs of the Masai Mara National Reserve in Kenya. From the fights, the cuddling, and the adorable cubs growing up into adulthood, we revisit some of the big cats that have been documented for decades. Elusive leopard sightings are on the rise with several new characters emerging from the shadows. Throughout the season, remarkable big cat behaviour is recorded through journeys of motherhood, play, survival and territorial battles that include the rarely observed bonding between mother leopard and cubs, and a dramatic male impala hunting sequence.

THE CLINTON AFFAIR – from Tuesday January 8 at 8:30pm on HISTORY

January 2018 will mark 20 years since the start of the investigation that led to only the second impeachment trial in America’s history. Now, it is not only a new century, but there have been seismic shifts in all aspects of our culture since the Clinton impeachment scandal unfolded across the global headlines of 1998. This six-part documentary series from Academy Award-winning documentary director Alex Gibney focuses on the extraordinary sequence of events that are an indelible part of American identity. It is a story of a vast right-wing conspiracy against the Clintons and a West Wing conspiracy against Monica Lewinsky, of Americans divided both along party lines and within themselves, as the nation was quick to condemn the behaviour of the president and Lewinsky, yet unable to look away. Sex, power, money, secrecy, lies, betrayal, ideological warfare – the series will play out like an elaborate political thriller. The producers have exclusive access to Monica Lewinsky, her family, and her legal archive and extraordinary access to some of the other principals in the story.

VALLEY OF THE BOOM – from Tuesday January 15 on National Geographic
Silicon Valley spawned some of the world’s most influential people and recognisable brands during the 1990s tech bubble. Valley of the Boom pulls back the curtain and introduces the audience to the real stories of these founders’ friendships, rivalries, victories and failures. Told with unparalleled access to the most groundbreaking and prominent figures in the tech world, the six-part limited series will follow the stories that made the history of the era. Two-time Emmy Award-winning actor Bradley Whitford (Get Out, The Post, The West Wing), Steve Zahn (War of the Planet of the Apes, The Crossing) and Lamorne Morris (Game Night, New Girl) star. Execs from STXtv, the television division of Robert Simonds’s STX Entertainment, include the creator, showrunner, director, and executive producer Matthew Carnahan (House of Lies) and executive producer Arianna Huffington.

Ron Iddles has often been referred to as the best homicide detective Australia has ever known, having solved 99% of all the crimes he has investigated. He is an old-school cop who is tough, inventive and incorruptible, a man who solved the unsolvable with his head and his heart. How this intuitive cop put more murderers behind bars than any other homicide detective in Australia is told in this six-part Foxtel Original series, in which Ron Iddles shares his secrets. Each episode takes us behind the scenes of one of Ron’s most challenging murder cases, with powerful insights from the victims’ families, his homicide colleagues, journalists and even Ron’s informers and suspects. Many of these people have never told their story on television. The Good Cop is more than a crime show – this is a masterclass in detective work from Australia’s finest cop.

The ultimate treasure hunt is back on when Outback Opal Hunters returns to follow crews of resilient opal miners on their mission to unearth a fortune in some of Australia’s harshest and remote landscapes from Lightning Ridge (NSW) and Opalton (Qld) to opal mecca Coober Pedy (SA) and now Laverton (WA). Old crews return, but the new season also brings some new faces. Opals are one of the most valuable gemstones in market – a single piece can be worth millions of dollars and 90% of the world’s entire supply lies hidden beneath the searing Australian Outback. The new season is a rollercoaster of triumphs and disasters with new teams, new machines and new opal. Out here anyone could make a fortune… if they can find it.